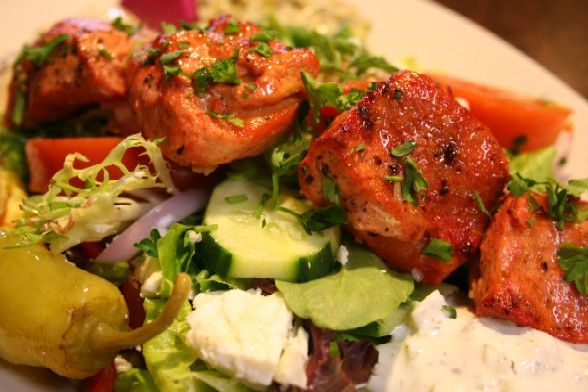 Opening a restaurant next to another popular one is not often the best choice because the result is the closure of the restaurant, often due to bankruptcy, or just simple embarrassment.  But Cafe 220, a mediterranean-style restaurant chose its spot next to one of the most visited restaurants in downtown Palo Alto, Pizza My Heart, yet it has still been running around on its own rhythm for 14 years.

The restaurant is at 220 University Avenue B. It does not have much decoration to itself. Outside the restaurant, there were three tables. Empty seats and tables could be seen through a glass door. The room was dark like a garage. The only brightness was the orange light coming from the ceiling. That might be why all the people chose to sit outside. The dark lighting gave a sense of mystery, just like how the mysterious restaurant manager decided to be on a mysterious schedule everyday, and refused to be interviewed about the mysterious history of his mysterious restaurant since it opened in 2002.

Once cash was taken (They also accept credit cards), the waiter came out of the restaurant with a stack of forks and knives, then handed them out and left. The tables outside were empty, covered with dust, clothless and napkinless, so we just decided to hold our utensils in the air.

After  ten minutes, the waiter brought out two plates of appetizers,  both with a pile of sauce on it, surrounded by pita bread. Content in the Hummus ($5.75) was revealed by its name. Dipping the pita bread in a pile of hummus gave plain flavor, though added a sandy texture to the pita bread. The Tzatziki ($7.29) was pita bread with “homemade yogurt with a hint of garlic” as it said on the menu, although no garlic was tasted. Some sauce was wasted because of the insufficient amount of pita bread.

The Tiropita ($5.95). The tofu-like squares were actually “cheese wraps” according to the menu, but they looked burned and cracked. It’s cooked through too much, which explains why there is no cheese flavors in this dish because the flavor just simply melted away. Without the cheese flavor, these are just like dried olive oil with a smoke taste onto it.

After a another 15 minutes, the waiter brought out the next two plates. When it came to the main dishes, actual Mediterranean food could be seen. The Chicken Gyros ($8.45) is a very organized plate, with all the vegetables in one section, all the chicken in another section, and two pieces of thin pita bread in a corner. It was totally deconstructed, and building the dish was difficult. However the chicken and lettuce together tastes really fresh, and the chicken was hot, so the dish actually broke my first impression of it being a safeway chicken salad. Though the two thin pieces of Pita bread had a hard time holding the blocks of chicken, so instead of building gyros, we dipped the Pita bread in the left over pile of hummus.

The Beef Shish Kebab ($9.25) was “Seasoned beef cubes, charcoal grilled,” according to the restaurant’s website. Flavor in this dish was amazing, especially the grilled pepper gave off a hint of hotness (flavor-wise), but the rice and pita bread was also very cold (temperature-wise), which could not remind people of how the dish was “charcoal grilled”.

Despite our disappointment with the appetizers and the main dishes, the desserts were delicious. Cinnamon Apple Crepe ($7.25) and the Full House Crepe ($8.25) were innovative, a combination of ice cream and crepe that balanced the heat and texture, with the ice cream being cold and smooth, and the crepe being hot and crispy.

Off on a bad start but ending with delightfulness. That is possibly why the Cafe 220 is still running after 14 years since it opened.