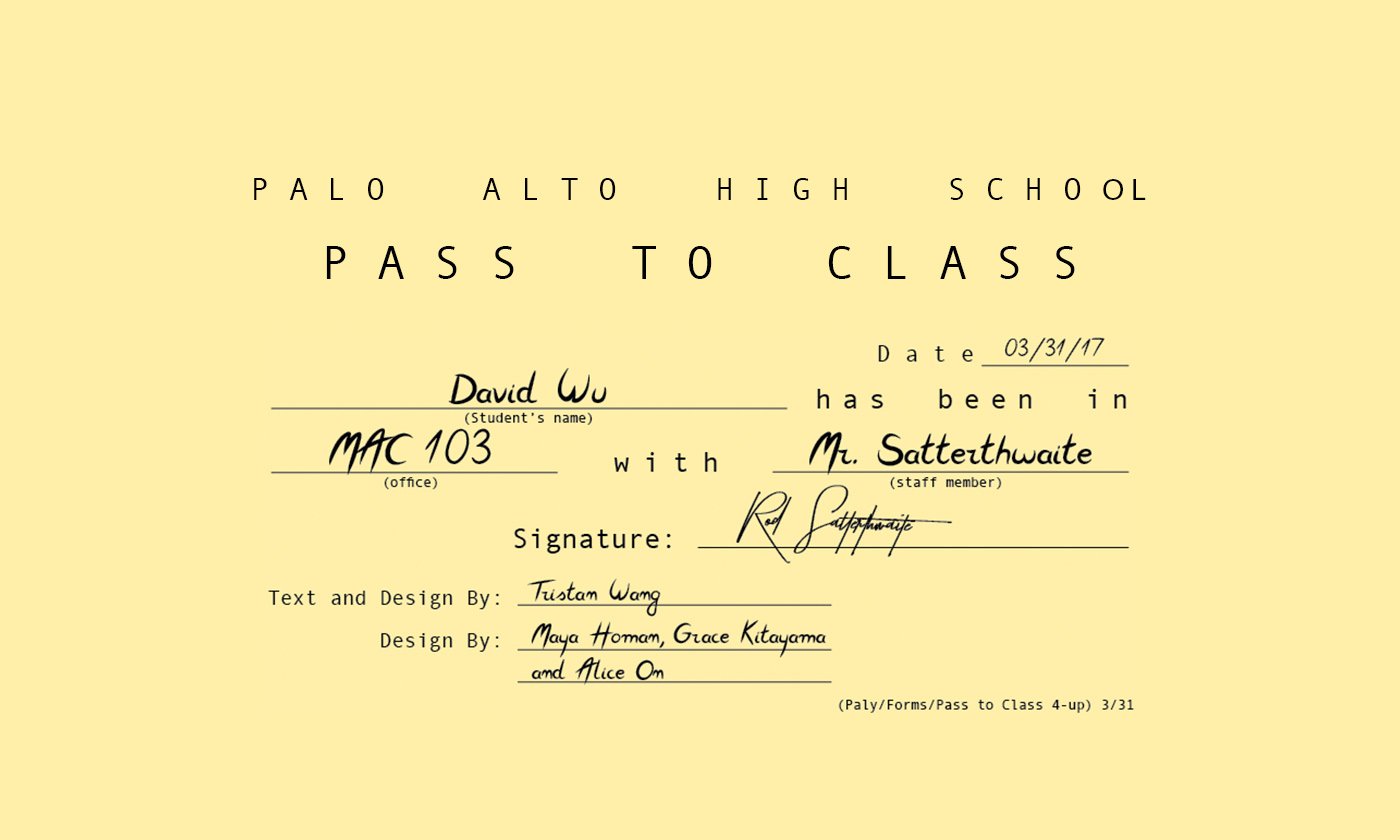 Missing in Academia: Teachers’ perspective on the tardiness and absence policies at Paly

Student tardiness and unexcused absences are common occurrences present in every school, and Palo Alto High School is certainly no exception. Every teacher at Paly handles these issues differently, their expectations and consequences often varying considerably in method and severity.

Conveniently for students, information pertaining to how to clear unexcused absences and obtain prior approval for excused absences such as family events, athletic events and college visits can be found on pages 8-11 of the 2016-17 Paly Student Handbook. Paly administration has an attendance policy which explicitly defines tardies, cuts, truancies and excused and unexcused absences. It also outlines standardized procedures on possible actions to address poor attendance, and the possible results of excessive, unexcused tardies and cuts.

And yet, the Paly administration intentionally leaves the consequences for tardies in classes to the discretion of individual teachers, provided that the teachers clearly communicate their expectations with students at the start of their course.

This lack of policy consistency inspires students to take advantage of lenient teachers, fuels tardiness and absences and fosters a sense of uncertainty among certain teachers.

“As a school administration we do track cuts and tardies as a whole… but we allow the teachers some flexibility on the local level because they’re in a better position to deal with the everyday situations of the students. Enforcing a strict school-wide tardiness policy is inappropriate and just too much to handle.”

Some Paly educators, like math teacher Cynthia Chen, establish clear consequences for tardiness for their students.

“When students come tardy, I have them stay during brunch or lunch to make up for the time that they lost,” Chen said. “Usually during this time I have them do homework, so there is a positive benefit because they can get some work done.”

Others, like math teacher Herb Bocksnick, neither consider nor wish their tardiness policies to be too penalty-driven. They instead incentivize coming to class on time or even early in order to discourage lateness.

“I usually allow early kids extra time to work on their quizzes,” Bocksnick said. “The only penalty is that if you’re late you’ll have less time to work on those… but it’s not too penalty-driven because everyone is allowed a chance to remediate [their grades] if they come see me after school.”

Unsurprisingly, individual student tardiness for classes at Paly seems very closely related to being late for school in general. According to a recent Facebook poll conducted by The Campanile, 87 percent of Paly students who are consistently late for class at least once a week believe that they are more likely to miss the first period of the school day than any other period.

However, most of the Paly teachers interviewed believe that most student tardies are avoidable, and that most cases of consistent student tardiness indicate a lack of responsibility and respect for others.

“Traffic accidents happen, malfunctioning red lights happen… but I would argue that 98 percent of the tardies are completely avoidable, and choosing not to avoid that, I think, is self-centered and a little bit disrespectful to everyone else in the room.”

“If a student is consistently late, it most likely shows that they are not organized,” said science teacher Ashwini Avadhani. “They are not respecting my time and other students’ time.”

Despite teachers’ clear objection to student tardiness, 68 percent of Paly students stated that they suffer almost no consequences for being late to class, and another 32 percent are usually only given verbal warnings, according to polls conducted by The Campanile. Additionally, less than 13 percent of polled students who are tardy consistently suffer academically, and less than 12 percent of the same population are denied certain in-class privileges as a result of their tardiness. Furthermore, less than 12 percent are called in to have conversations with teachers after class.

This can be explained by the fact that a substantial number of students tend to skip certain classes more than others, depending on how strictly the teacher in question typically deals with late students.

English teacher George Vuong is troubled by a widespread phenomenon he calls “strategic tardiness,” where students feign legitimate reasons for tardiness or absences to avoid deadlines and tests, or to acquire more time to work on late assignments.

“Sometimes students seem to intentionally be tardy… or absent, especially if they think they can get away with [disciplinary actions] and avoid turning in an assignment or [taking] a test on time,” Vuong said. “I feel that this is something we teachers need to discuss as a school… so we can work out something fair and equitable for everybody.”

Like-minded educators, such as Spanish teacher Kevin Duffy, hope that the school can minimize this trend by enforcing a consistent tardiness policy for all Paly teachers.

“I would much prefer that the school had some kind of expectation in place across the board,” Duffy said. “The consistency would be beneficial because when students know that a teacher is more lenient than others … it’s almost like they have permission to come late to those classes.”

Chen offers similar input, and also hopes that a unified, school-wide tardiness policy would avoid any unnecessary ill feelings between tardy students and teachers who are perceived to be stricter than others.
“I’d like some more guidance from the administration,” Chen said. “If the students know that it’s not the teacher’s discretion but a consistent policy applied to them, it also feels less like a personal punishment coming from the teacher.”

Regardless of their takes on specific expectations and consequences regarding late students, the vast majority of Paly teachers agree that all and any tardiness policies should ultimately be administered to cultivate character.

“Sometimes, let’s face it, the content that I teach comes secondary to leaving here with a life skill of responsibility and timeliness,” Bocksnick said. “At some point, being a late person is going to bite you in the butt.”