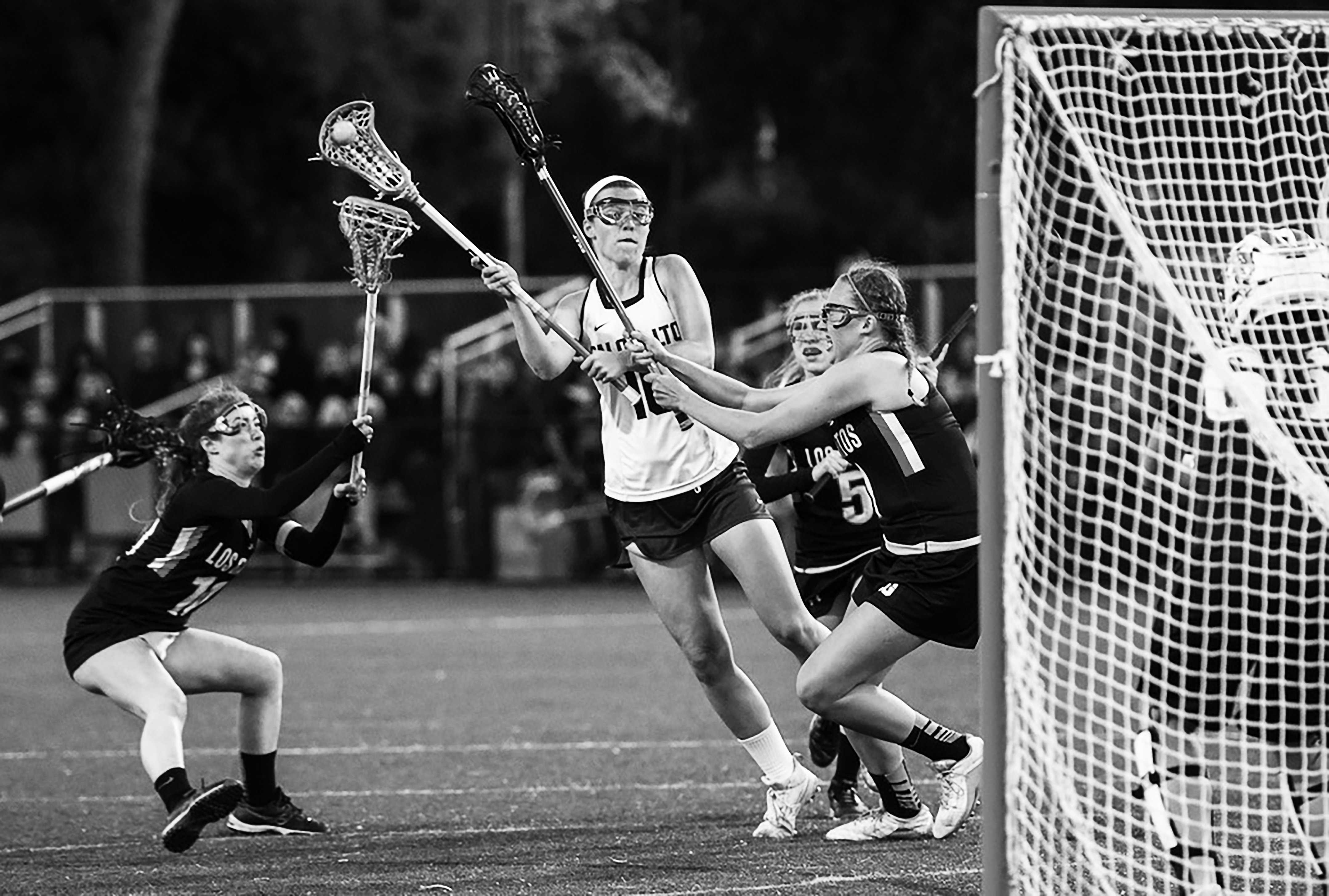 As the girls lacrosse season comes to an end, the team is proud of its achievements despite having faced major obstacles.

Throughout the season, girls lacrosse has faced a myriad of problems. First, their goalie, senior Mathilda Kenrick, was banned from playing due to participation in lacrosse in another country.

Because of this loss, the team had no one to defend their goal for three weeks of the season. Luckily, junior Mattie Orloff successfully took the position without any prior experience.

“We were fortunate to have Mattie step up part way through the season,” said girls lacrosse coach Jamie Nesbitt.

Additionally, the team had more injuries than they typically had in prior seasons.

“In total, we’ve had three season-ending injuries and lots of other significant injuries,” said senior Quinn Knoblock, one of the three team captains.

This resulted in a couple or no available substitutes for some games, and proved to be stressful due to the fear of having no back-ups to switch out tired players.

With all of these setbacks, the team was still able to come out with an overall record of 13-8.

“I am so proud of what this group of young ladies has accomplished. The adversities and obstacles have helped shape our program into who we are.”

According to Nesbitt, uniting as one team should not be a difficult task, due to athletes who bring different skills onto the field.

“Another strength our program seems to have year after year is strong sportsmanship and a love for our teammates, which drives everyone to work hard and come together during tough times,” Nesbitt said.

Regardless of the outcome of the championship, next season will have a change of leadership. All three spots for captain will be open for younger players to fill next year.

“I hope to see new leaders emerge that are as charismatic and kind as our seniors have been,” Nesbitt said.

As Knoblock and her fellow captains prepare to leave, she believes that the team’s future is in good hands.

“Only three of us will be graduating so there won’t be a significant dent numbers-wise,” Knoblock said. “There are a lot of rising seniors that I think will really embrace and take on leadership roles on next year’s team.”

As the season has come to an end, the girls are proud of their achievements.

With a total of 12-3, the team would like to win the Santa Clara Valley Athletic League (SCVAL) championship for the third year in a row, but will face more hardships than before, due to a lower score than  the previous two SCVAL-winning seasons. However, Knoblock remains optimistic.

“We’re seeded slightly lower than we have been in past seasons, but we feel really strongly that it is a totally feasible goal,” Knoblock said.

Regardless of all the issues that could have easily stopped them from maintaining their great reputation, the vikings are is ready to fight for their spot as SVCAL Champions this Saturday.