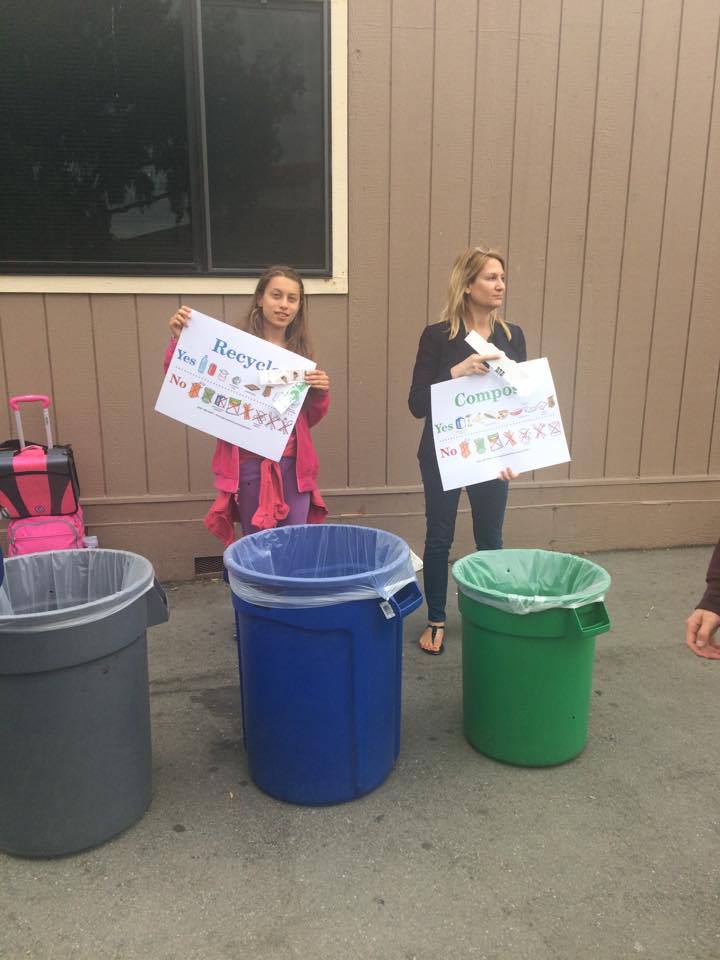 Photo by: Grace Kitayama The Campanile

Palo Alto is renowned for being the heart of Silicon Valley, with its esteemed culture of constant innovation. From groundbreaking technology, to the multitude of companies that have originated in Silicon Valley, Palo Alto has always been light years ahead of the rest of the world. This progressiveness applies to Palo Alto’s environmental policies as well. According to the City of Palo Alto’s website, Palo Alto has a mission to become a Zero Waste City, meaning that the city not only recycles to cut down on the amount of waste ending up in landfills, but also works to reduce the amount of waste that is produced.

Palo Alto High School works to reduce waste as well. The school provides compost, recycling and garbage bins for students to sort their trash. Additionally, many students bike or carpool to school as a cleaner means of transportation that does not produce as much carbon dioxide emissions.

Only 67 percent of the over 100 surveyed students said that that they used the bins provided by Paly to sort their garbage into compost, recycling and waste piles all of the time. Furthermore, only around 44 percent of surveyed students bike to school over driving even though almost 90 percent of students live within five miles of Paly. The majority of students also brings their lunch to school with them in a disposable container rather than a reusable one.

In all honesty, with the resources Paly has, we are not doing enough to help the planet. Paly students understand the magnitude of the issue of climate change, but none mentioned in the survey in what aspects of our lives we could reduce the waste and carbon dioxide that we produce. Though the steps Paly has taken to help the environment are definitely beneficial (such as providing recycling and compost bin, as well as supporting TapOut club which raised awareness about the harmful use of plastic bottles), there is more that we can do holistically as a community in order to reduce our carbon footprint.

Though it is harder to control how students take transportation to school, once they are at school, we as a student body can try our best to make sure that students are leaving as little waste as possible on campus. Therefore, we should encourage all students to sort their garbage at school, especially since we are privileged enough to have a city that provides means for recycling and composting.

One way in which Paly could significantly lower its carbon footprint can be through modification of its very own Viking Cafe.

According to Waste360, an organization that works to spread news of environmental issues, Seattle requires its residents to compost at least 90 percent of their food waste and food-contaminated products, including paper napkins, paper towels and cardboard containers.

At Paly, we can imitate this practice by requiring the cafeteria staff to also compost at least 90 percent of all compostable waste. Furthermore, we can also push for the student body to partake in this implementation by putting more compost and recycling bins in classrooms and study areas, such as the library and the Math Resource Center.

However, it may seem like a challenge to get a whole school to change its methods. Luckily, there are still ways each individual student can reduce their carbon footprint.

Though many students at Paly bike to school, there are still many ways to ameliorate transportation methods. According to ScienceDirect, a database of scientific journals, transportation makes up 27 percent of carbon emissions produced in the U.S. Specifically, if students carpool with friends or drive to school in an electric car more often, a large amount of carbon emissions could be reduced.

Junior Alyssa Ibuyan takes the bus home from school as a mode of transportation that is more environmentally friendly that driving.

Students can also reduce their waste off campus. When buying drinks at a cafe, instead of using a disposable cup, students can bring their own travel mug from home. Not only does this help reduce waste, it also gives students better deals on their drinks, since many travel mugs are larger than the sizes offered at coffee shops.
People underestimate the power that students have on making a large-scale effect on the rest of the world. If each student at Paly contributed to this cause, our Paly campus would be significantly more environmentally friendly, setting a precedent for other schools in California to match.