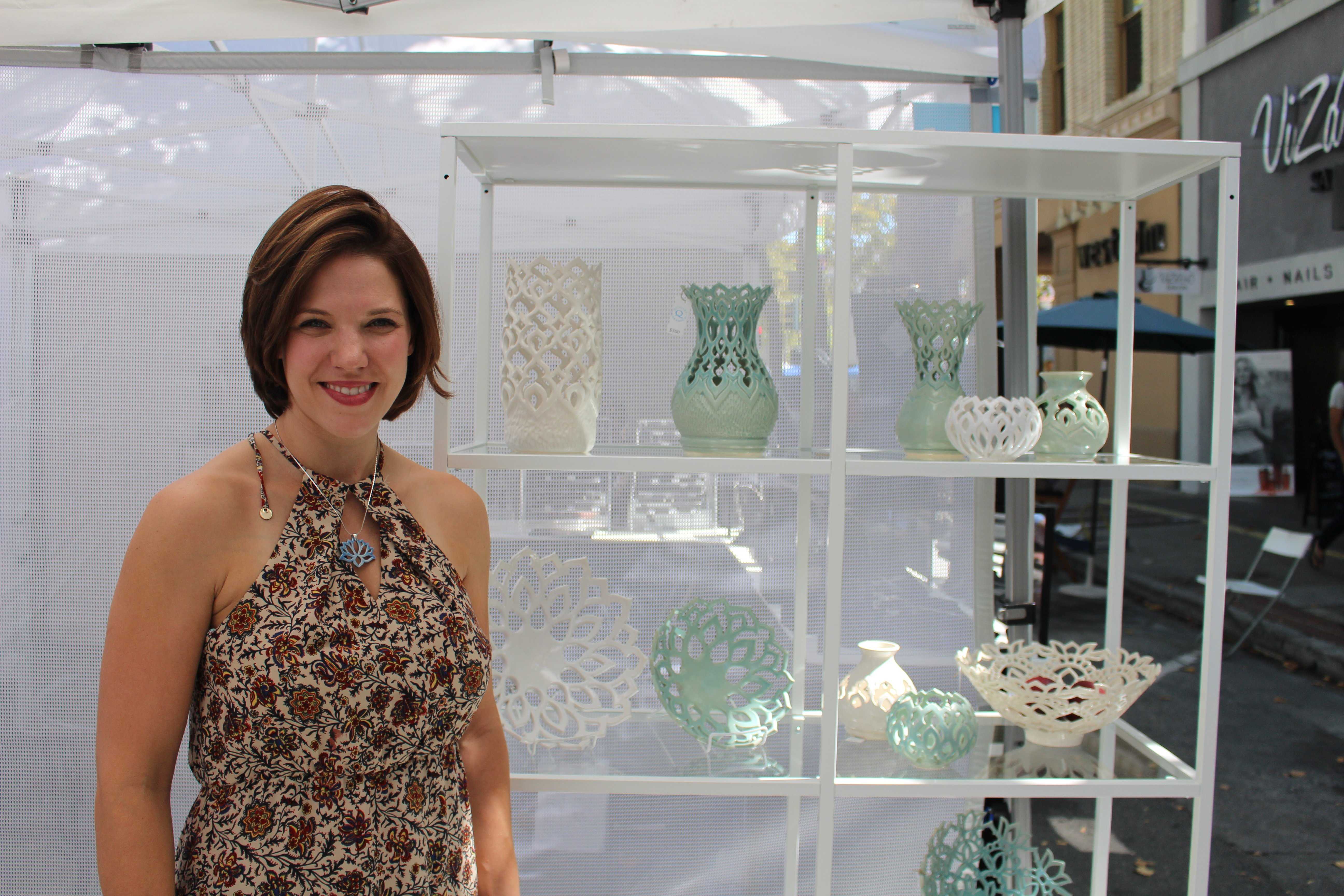 Festival of the Arts celebrates unique styles of craft

Once a year, tens of thousands of people mill around the streets of downtown Palo Alto to enjoy the Palo Alto Festival of the Arts. Hosted by the Palo Alto Chamber of Commerce, the festival celebrated its 36th year on Aug. 26 and 27.

This community event brings together 300 artists and crafters from all different background and places, each with his or her own story and inspiration.

Photographer Oliver Klink, a seven-year veteran to the festival, incorporates the message of “don’t forget today for a better tomorrow” in his art.

Klink, who is originally from Switzerland, first began photography when his father gave him a camera at 7 years old. They would go hiking together and take photographs in the Swiss Alps.

Klink’s turning point in his career, however, was when he began to study physics and photography. After getting his masters in physics, Klink learned to manipulate light in his pictures.

“I think [the photograph shows] the bond between humans and animals,” Klink said. “If everyone bond[s] this way, the world would be better.”

Klink especially likes to capture elephants because “they are very charismatic and giant, but in danger.” Through his works, Klink reminds people of the beauty of things that are forgotten by society.

“We all get entangled in modernization and our busy lives that we forget about today,” Klink said. “If we preserve today, we’d get a much better tomorrow.”

Another artist at the festival was Jenny Hill, a first timer, who specializes in making fashion from fiber.

Hill began her art when she was an organic farmer for a year in 2012. During that time, she worked with a shepherd and a textile master, who taught Hill how to make clothing with a process called felting.

“It just really spoke to me,” Hill said. “The way you can feel and touch it and mold it. You can go a lot of directions with it and I will never get bored ever.”

Hill draws inspiration from many sources. She incorporates patterns, structures and textures she sees in nature and in her travels into her clothes. For example, Hill used the bolts from edges of metal to pattern one of her pieces.

[Hill] incorporates patterns, textures and structures she sees in

nature and in her travels into her clothes.

“Wearable art has the ability to transform how you feel about yourself, the places you go, the people you talk to, the conversations you have, and that’s the power of art,” Hill said.

Ceramic artist Annie Quigley was another first timer at the festival. All of her work is created on a pottery wheel and hand-carved. Quigley is from Los Angeles, so it was not hard to believe that she was originally an actress. Quigley got into art as a way to relieve the stress of auditions. She started out painting and drawing, but then after trying out a ceramics class, she fell in love and that eventually took over her acting career completely.

“I found my medium,” Quigley said. “Ceramics was what I needed to find.”

Quigley draws inspiration for her designs from her travels.

“It started with Yosemite and national parks and then I went to Southern Spain, where Moorish or Middle Eastern Art is heavily influenced,” Quigley said.

Quigley spends a whole week just carving patterns into bowls, vases and other pieces. Her only hope is that her art “finds a good home and people love it for a lifetime.”

Painter Elisabeth Sullivan participated in the festival for the fourth time this year. She has been practicing her art since she was a child.

Sullivan took art classes throughout her childhood and high school career and then went on to major in art. Now attending her fourth year at the festival, Sullivan displays her collection of colorful, nature-inspired, surreal art paintings.

Sullivan draws inspiration from her observations, and her imagination does the rest.

Sullivan draws inspiration from her observations, and her

imagination does the rest.

“The inspiration is kind of inside and it just takes one little thing to set it off,” Sullivan said.

For example, the idea for one of her paintings that depicts penguins sitting on islands made of clouds came to her while she was on a plane.

As the plane was flying over the ocean, she looked down the window and thought that the clouds looked like islands in the water.

“I didn’t have a very happy childhood, so [my art] was a way of escaping the world,” Sullivan said. “It’s my happy place and people respond to it.”

Some of Paly’s very own artists also contributed to the festival, participating in the Italian Street Painting Expo, where 60 chalk artists created large works of art using only the asphalt as their canvas.

Senior Vivian Nguyen has been participating in the expo since she was a freshman. Nguyen began chalk painting after watching artists at the Festival of Arts the previous year.

“If you accidentally touch it, your hand gets covered in chalk, but I think that’s the joy of chalk painting,” Nguyen said. “You get really messy, but in the end, you have a finished art piece.”Nguyen gets inspiration from anything that interests her at the time.

“It’s usually things that I’m inspired by or things that I see,” Nguyen said. “Like, sometimes it’s movie posters because I enjoyed the movie and I wanted to have a tribute to it, but majority of the time, like all the ones I’ve done so far are just portraits because I really like drawing people.”

Juniors Renle Chu and Maurice Wang participated in the expo for the third time.

For their inspiration, they usually decide on a general theme and then look for reference pictures on the internet. Chu said that her favorite thing about chalk painting is the monstrosity of  the canvas because she get to see how all the details come together at the end.

“You never see the bigger picture until you step back and look at it,” Chu said.

Next year, when the Palo Alto Festival of Arts rolls around, stop by and take a look around. Seize the opportunity to talk to the artists there because the possibilities to the stories they might have are endless.