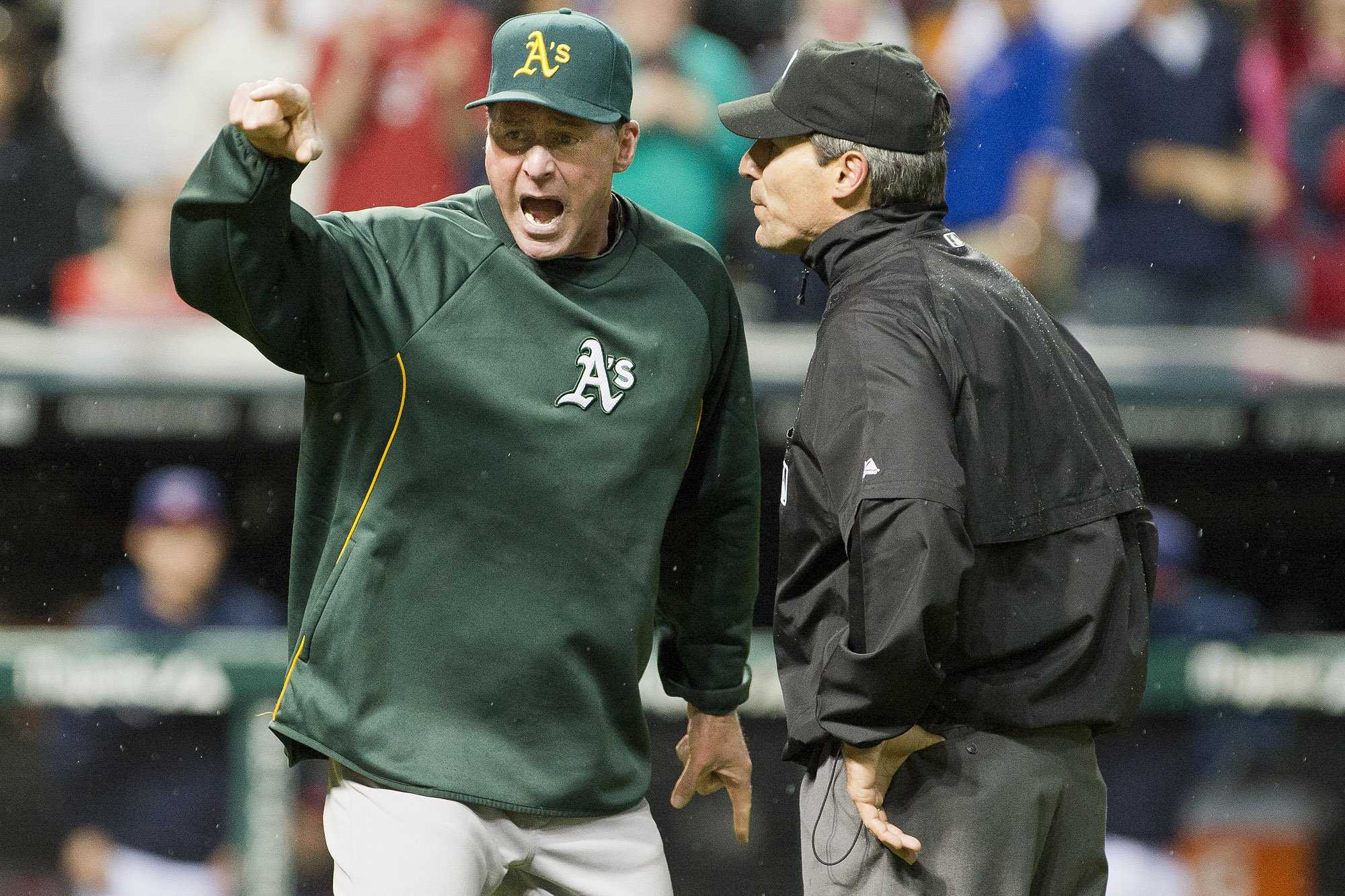 CLEVELAND, OH - MAY 8: Manager Bob Melvin #6 of the Oakland Athletics yells after being ejected from the game by umpire Angel Hernandez #55 for arguing a call during the ninth inning at Progressive Field on May 8, 2013 in Cleveland, Ohio. The Indians defeated the Athletics 4-3. (Photo by Jason Miller/Getty Images)

In baseball, it’s common for a player or manager to dispute an issue on the field with the umpire. Over time, these relations have become increasingly tense.

Whether it is Bob Melvin furiously spiking his hat to indicate where the ball crossed the plate or Bruce Bochy arguing that the ruling of an instant replay call was incorrect, players and coaches have always taken issue with umpires’ calls.

Fans are always complaining, players and coaches have been frustrated, and as a result the war between players and umpires has further escalated.

Umpires have become the villains of baseball.

Kinsler said Hernandez is “ruining baseball games” and that “nobody wants [Hernandez] behind the plate.”

While Kinsler could have criticized his officiating with more class, the fact that he called out an umpire and aired his grievances is a step forward.

Players shouldn’t fall victim to criticism for voicing their opinions regarding an umpire’s performance. Too often do we see umpires abuse their power. Players are always under the scrutiny of fans, and now it is time for umpires to be subject to the same level of criticism because players have been taken advantage of far too many times.

Athletes like Kinsler should not only be applauded but held up as role models, because if the MLB is making changes to many aspects of the game, it should focus on and strive for improving officiating quality more than anything.

Umpires rarely get criticized aide from meaningless screaming matches on the diamond, and for players to make umpires aware of their mistakes in a public setting, it will only make umpires better at their job.

On the same token, umpires should start to express their feelings about players or managers more often.

In early August, umpire Joe West expressed his distaste for batters’ approaches during at bats. According to USA Today, West called Texas Rangers’ Adrian Beltre the biggest complainer in baseball.

“Every pitch you call that’s a strike, he [Beltre] says, ‘Whoa! Whoa! Whoa!’ West said. “I had a game with him recently, and the pitch was right down the middle. He tells me, ‘That ball is outside,’ “I told him, ‘You may be a great ballplayer, but you’re the worst umpire in the league. You stink.’”

Although players, coaches, and umpires should start to voice their opinion more often, they should do so with much more diplomacy and grace.

In non-professional games, that tends to be the case.

Unlike MLB players, student-athletes on Palo Alto High School’s baseball team say they appreciate the work umpires put in and realize that umpires will make mistakes once in awhile, even if it does go against their team.

According to senior and starting shortstop Max Jung-Goldberg, the umpires in the Santa Clara Valley Athletic League (SCVAL) don’t deserve to be scrutinized or verbally attacked by players because mistakes are human.

“I honestly don’t worry about umpires,” Jung-Goldberg said. “If they make a bad strike or out call, it’s what they saw. They’re human. You have to live with their mistakes and not dwell on them. It’s not worth my time to argue with them, so I don’t really worry about it too much.”

Senior starting pitcher Jeremy Akioka feels the same way. He said even though there are controversial calls all the time, players are instructed to keep quiet and have their coaches speak up for them.

“We [the team] understand that the life of a high school ump isn’t the most rewarding or luxurious,” Akioka said. “Our coach says that he has our backs when it comes to calls on the field — this mostly comes in the form of Coach [Pete] Colombo chirping from the dugout — and that we should respect the call on the field.”

Senior starting catcher Nathan Willis agrees, saying high school players have not yet earned the right to go out and criticize umpires, though major leaguers should do it with a level of respect.

“High school players are expected to show respect because these are umpires that give their time to allow us to play the game we love,” Willis said. “Players often get upset with bad calls or get frustrated if they feel they are being treated unfairly. But, the thing is, there are harsh punishments for players that act out against an umpire in high school. Professional sports is a whole other discussion. They get paid millions of dollars to compete at the highest level of the game. They have the right to demand perfection and voice their opinions if they feel there was a mistake.”