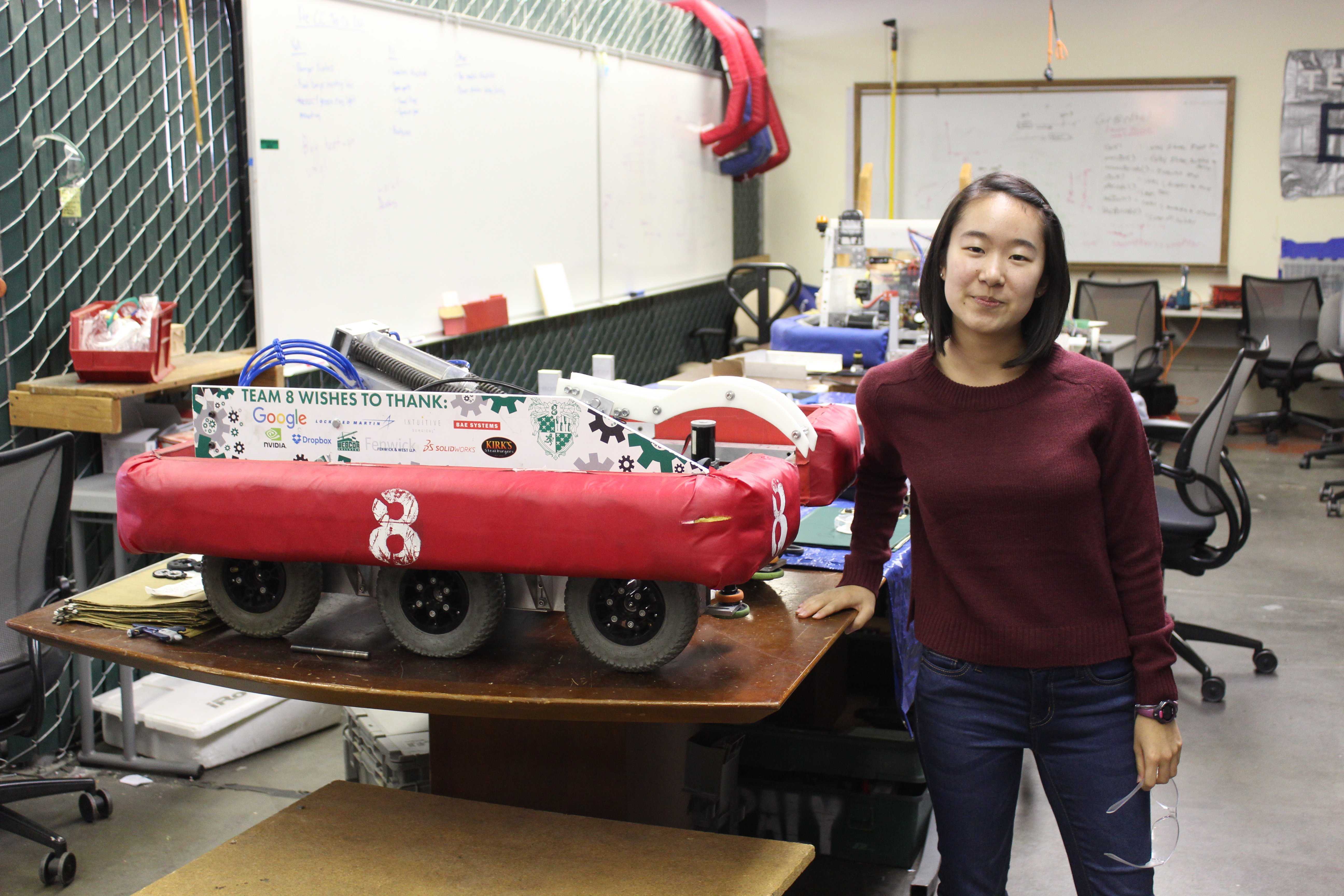 Organizations at Paly such as Science Olympiad (SciOly) and Robotics have been increasing gender diversity by encouraging women to apply, and having women in leadership roles.

In the past couple of decades, science, technology, engineering and mathematics (STEM), have evolved into more gender neutral fields, which rely more heavily on social skills than commonly believed.

The myth of men being better suited for STEM has led a Google engineer to send a memo about women not being biologically-suited to work in tech. The engineer was fired shortly after releasing the memo on Aug. 7.

Senior Annalee Soohoo has been an active member of the Paly Robotics Team since her freshman year, and said she hopes to pursue computer science in college.

“I think the [gender] gap [initially] increased because women had not been exposed to [personal computers] through video games like many men had,” Soohoo said.

While Soohoo has observed a disparity between the amount of males and females on the Paly robotics team, she believes that the team encourages participation regardless of gender.

“On the Robotics team, there are more guys [than] girls, but I feel like there is a lot of support for anyone [in Robotics] no matter what you are interested in,” Soohoo said.

Every year, more opportunities and programs are opening up for women interested in STEM, such as the National Girls Collaborative Project, the American Association of University Women and the Association for Women in Science.

Over the summer before her junior year, Soohoo attended a seven-week program hosted by Microsoft called Girls Who Code.

“We learned some languages like C++, Java, Python and some web development. It was really nice to meet other girls who were also interested in learning computer science.”

While Soohoo is a big fan of Paly Robotics’ inclusive environment, Neelima Valluru, a senior at Henry M. Gunn High School has a different opinion about Gunn’s Robotics Team (GRT). Valluru has been on GRT since her sophomore year.

“On GRT, many girls face people undermining [their] ability to do things,” Valluru said. “People [assume] that if you and another guy were working on something, the guy automatically knew more than you did.”

However, though Valluru thinks GRT’s environment has much more room to improve, Gunn senior Joshua Chen believes that GRT is still heavily diversified. “The environment presented to girls may sometimes deter them from trying to participate,” Chen said. “But I actually think it’s getting better by a lot. Our team is pretty much split half and half girls and guys and most of our leadership are girls.”

There are many factors that discourage women from participating in STEM jobs, such as a lack of female representation in STEM leaders, according to Valluru.

“You don’t really see a lot of women professors in STEM and not as many women in research. The lab I interned at had no women [postdoctoral researchers] at all, which I thought was really disappointing because that’s what I want to do in the future.”

Gul Eris, who teaches AP Physics and Physics Honors at Paly, thinks the lack of women in STEM has nothing to do with biology.

“[Women do not] dislike STEM, and that is the very idea we should stop spreading around,” Eris said. “It is true that there are less overall women enrolled in STEM courses and related jobs, but I believe there are contributing factors to that such as a shortage of role models and mentors in STEM fields.”

Eris also believes that words like “diversity hire” have negative stigma and make it so female workers have to prove themselves more often. She thinks that the amount of women in STEM classes has improved at Paly and can be seen in her class enrollment.

“When I first started 15 years ago [my] physics honors courses had about 25% girls, now it is about 46%, close to being equal,” Eris said. “AP physics has about 33% girls, but I believe this shall increase as well.”

Paly junior Annie Tsui, who hopes to major in STEM in college—specifically biochemistry and computational biology—believes stereotypes play a large role in deterring women from STEM.

“Stereotypes affect women every day, even now. Math professors are [usually] associated with men. In TV shows and movies, the scientist is always a man and not a women, which ends up getting to women subconsciously.”

According to a PEW Research Center article written by Columbia journalism graduate Drew Desilver, not only is STEM attempting to make room for more women, but social skills are also starting to play a bigger role in STEM than before.

Empathy is one of the big social skills appealing to people in STEM.

“I think that it’s important to be able to express yourself and care about others,” Soohoo said. “When you are working on a team, it is important to drop your egos at the door and work together.”

Vallaru thinks that awkwardness is an important social skill to master.

“Social skills are super valuable because being able to communicate with other people on projects you are working on is incredibly important or you will run into big problems,” Valluru said. “You should be able to voice your opinions without feeling awkward and feeling they aren’t valuable.”

According to articles like “Different World Views: STEM Students and Student Affairs” by Mary Lou Santovec a writer for the Women in Education Newsletter, awkwardness has been largely associated with many parts of STEM fields, yet many people involved in STEM are pushing to change that stereotype.

“The worst social issue I have encountered in my STEM classes is making a situation more awkward than it should be,” Tsui said. “If you think it is awkward, then it is definitely uncomfortable for everyone.”

While STEM is making improvements each year, in order to further dissolve the gender gap, both Tsui and Valluru highly encourage girls explore the field of STEM to decrease the gap.

“I definitely encourage more girls to be interested in STEM and to do what they want and not be shot down by some stereotype,” Tsui said.

Valluru especially emphasizes that girls are just as capable as men in STEM, and should not be afraid of the stereotypes they will face in the fields.

Valluru said, “I hope there are a lot more girls in CS and they realize that it is not as intimidating as people make it seem, and I hope that girls are viewed as equally competent in STEM as men.”