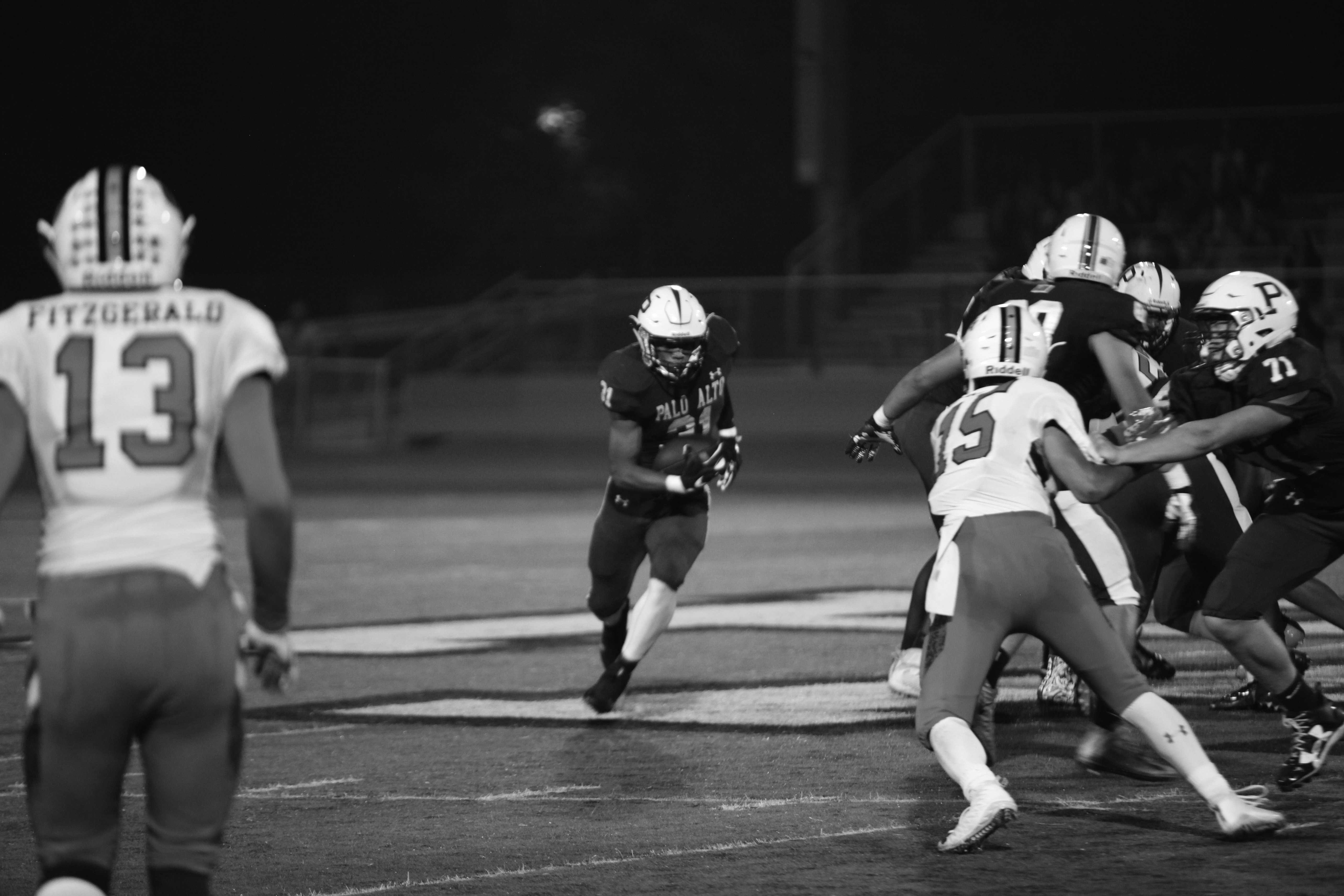 With a team determined to dominate the season and a new gym containing stellar equipment to whip the team into shape, the football team is ready to tackle any challenges the season might present, according to players and the head coach.

“My expectation for this season is to [have] a winning season and, of course, win Central Coast Sections (CCS) and go to state,” said senior Cullen Tellez, one of the two varsity team captains. “I think that it’s time to bring the Paly football program back up to its feet and be on top again.”

The addition of the Peery Center as a facility for the team has already provided an inspiration to the players, according to junior Wes Walters, a varsity linebacker.

“We’ve got a new weight room, which I think we’ll use a lot, and we’ll get a lot stronger,” Walters said.

The team is going into the 2017 season with a focused mindset and their eyes on the prize. Despite their opening losses, they still remain optimistic for the rest of the season.

The ambitious squad has been training hard for months, putting in work on and off the field.

“Some differences about this upcoming season compared to past seasons is that all the players have a winning demeanor,” Tellez said. “We’ve been grinding through the offseason to make this season better than before, especially with junior varsity (JV) joining us after going 9-1 last year.”

The players aren’t the only ones with high expectations for the season.

“I think that we are looking to compete for league title, that’s always goal number one,” varsity football coach Danny Sullivan said. “Anything positive after that is a bonus.”

Unfortunately the team’s strong spirit and determination weren’t enough to pull off a win in either of the team’s first two games.

Their away game against Patterson, located near Central Valley, ended in a 37-27 score.

The more devastating loss was the team’s game against Half Moon Bay at Opening Night last Friday. Though the stands were filled with spirited and supportive Paly students, the high-level technique of the opposing team resulted in a defeat for Paly, according to Tellez.

However, this loss led to a more focussed attitude for the team and a strong determination to have a successful season away and at home hasn’t faded.

“I think we’re going to bounce back,” Tellez said. “We’re hearing people saying ‘we already know the football team is going to lose’ and we kind of use that as fuel to motivate us, to work harder and win games. Adversity fuels us for motivation to win games.”

The highlight of this season will be the big night of the Homecoming game, which will be on Oct. 27 against the Saratoga Falcons.