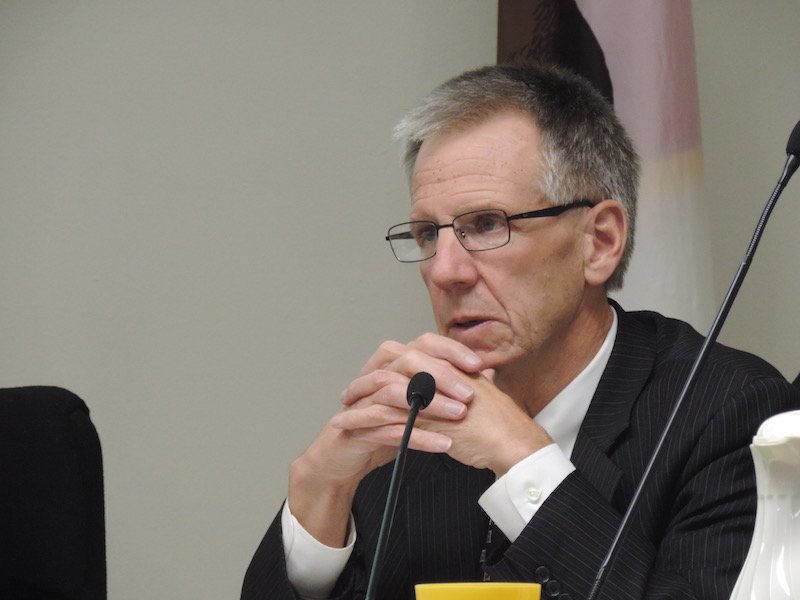 Superintendent McGee to retire in June

His decision, which caps off a 45-year career, comes after a string of criticisms on issues such as sexual assault allegations and the weighted GPA debate.

However, there is more to McGee’s retirement decision than just criticism.

Each year, the Board of Education conducts an evaluation of the superintendent and gives him or her either a positive or negative rating.

According to McGee’s contract, the school board is required to report any and all positive ratings but is not required to report negative ratings. This year, the board did not report an evaluation for McGee, which suggests he received a negative performance review. Many contend that this evaluation and the subsequent decision not to renew his contract could be a factor in McGee’s decision to retire.

When asked whether the board gave McGee an unsatisfactory rating, Palo Alto School Board President Terry Godfrey said the board simply “followed the contract.”

As for McGee, he said multiple times that his decision to retire was entirely his own and was not influenced by any board evaluation, positive or negative.

“I’m 67-years-old,” McGee said. “I’ve spent 30 years as a superintendent and 45 years teaching. It’s time to dial it back a little. [I would like to do] something around education. I love to write. I’ll also be able to spend more time with my grandchildren, whom I love dearly.”

Godfrey also echoed this sentiment, saying the board evaluation and McGee’s retirement decision were separate.

McGee’s departure as superintendent marks the end of an eventful era in PAUSD history. McGee’s list of achievements in his time at PAUSD includes establishing the popular and acclaimed Advanced Authentic Research (AAR) program at both Paly and Gunn which provides high school students experienced mentors to help conduct research projects on topics of the student’s choice. McGee also introduced more flexibility between math lanes in middle school, increased the number of eighth graders in algebra and introduced full-day kindergarten.

However, alongside these triumphs, there was a multitude of controversial moments

during McGee’s tenure. Large-scale parent uproars like those that occurred over issues like weighted grades and the removal of zero period at Gunn High School had significant impact on McGee’s image in the community and earned him a fair amount of criticism.

McGee acknowledged this criticism, much of which has come from online blogs, stating that “[as superintendent,] you have to have a thick skin. On blogs, if someone doesn’t sign their name, I don’t read it.”

Godfrey has a different take on McGee’s abundant criticism.

“I wouldn’t say it’s too harsh, I would just say we happen to live in a community where people are very interested and we have ways to let them know what’s happening,” Godfrey said. “I think Dr. McGee can take it. He is a big boy. He’s been at this for a really long time.”

Many have called for McGee’s immediate resignation, but such an action would not be feasible at the moment, considering the hunt for the next superintendent is in its early stages.

“The hunt for the next superintendent is actually sort of a long process,” Godfrey said. “The way senior school administrators are hired, they really only become available at the end of the school year. So you can’t really just hire one in the middle of the year.”

Since hiring a new superintendent is such an arduous process, the district will likely hire a search firm and the process will probably take many months.

With  regards to a past announcement, Godfrey “wouldn’t expect to see anything until the spring.”

McGee is looking to make the transition between superintendents as smooth as possible.

“[We have to] assure that the next person can continue the good we are doing,” McGee said.