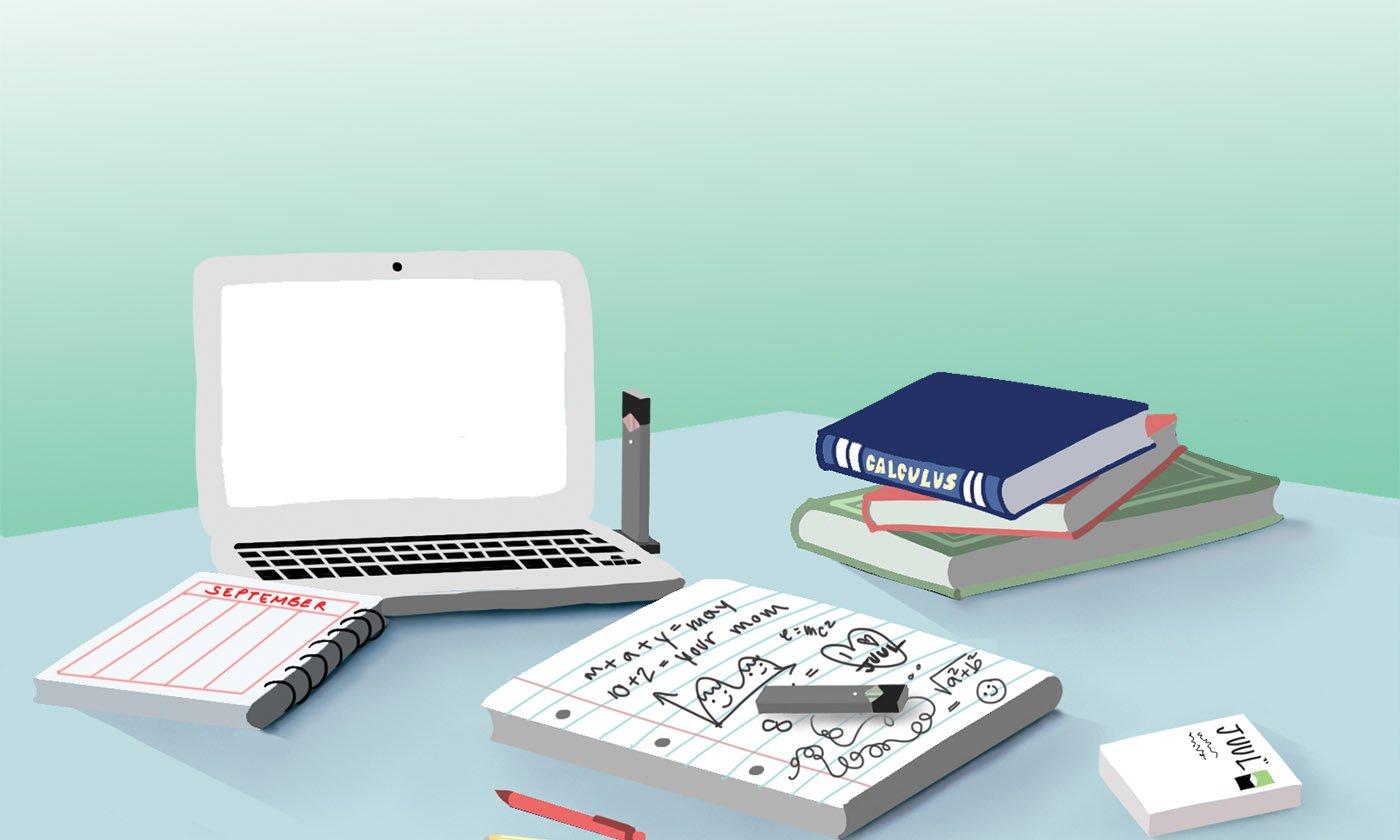 If a student at Paly were to walk into one of the bathrooms during brunch or lunch, especially the art bathroom, they would more than likely witness a group of students passing around a Juul. Vapor fills the stalls, and students discuss their favorite e-liquid flavors.

The Juul is a new vaping device developed by its parent company PAX Labs, a giant in the portable marijuana and nicotine vaporizer industry. The Juul is also known for its minuscule size and ability to be used stealthily, as it can be concealed easily as a USB with its sleek and modern design.

Vaping is the act of inhaling vapor from e-liquid, liquid that contains nicotine, through a personal vaporizer; vaping with a Juul is famously known as “Juuling.” As Juuls pass from hand to hand, growing numbers of students are seduced into the vaping community: a space where students laugh, joke around and Juul.

The reality is that the consumption of any tobacco product on a school campus is illegal. Yet Paly’s administration, while recognizing vaping as a growing problem, acknowledges that it has a hard time enforcing the school codes. “A Juul is so easy to hide, which makes solving [the problem] harder,” Assistant Principal Jerry Berkson said. “[Vaping is] something we will obviously have to ramp up and take care of.”

In addition to the school rules about tobacco prohibition, it is illegal for people under the age of 21 to purchase any tobacco product. Not everyone succumbs to the temptation of the Juul. Whether or not they don’t want break the rules, or because they just don’t enjoy vaping, many students simply choose not to partake. Someone who wants to report the use at Paly may come under pressure from the vaping community members to keep the secrecy.

“I feel like I should report [vaping] when I see it, but I feel like if people found out that I was the one who snitched, then I would get backlash,” said sophomore Julia, whose name has been changed to conceal her identity at her request.

According to the Centers for Disease Control and Prevention, vaping has surged in popularity in the last decade and has become the most common way to consume tobacco with teens.

The 2015 National Youth Tobacco Survey estimated that 620,000 middle school students and 2,390,000 high school students have used e-cigarettes at least once in the past 30 days.

For many students, they believe that Juuling is safer than cigarettes, however it still poses health risks that many students may not be aware of.

“[Vaping] can lead to not only addiction but also to deficits in attention and learning, reduced impulse control and mood disorders,” said United States Surgeon General Vivek H. Murphy in a 2016 report. “Furthermore e-cigarette use among young people is strongly associated with the use of other tobacco products.”

At Paly, 55 percent of 269 students who responded to a Campanile survey reported that they had vaped. Of those, 52 percent had vaped on campus and half use a Juul. Clearly, vaping has become a habit on campus. For many students, Juuling brings a very attractive social aspect. Students pass around the Juul and meet new people through this act, breaking the ice with a simple drag of the Juul.

Junior Julian, whose name has been changed to conceal his identity, is a frequent Juuler in school bathrooms.

“Sometimes, when I go to Juul in the bathroom, I will meet other people with Juuls, and we get to talking and when I see them outside, I say hi to them,” Julian said. “It’s really just this community of people who like [the rush from nicotine].

The producer of the Juul did not intend the use of the device to have a social aspect. Instead it is supposed to be a tool to help smokers kick the habit. “JUUL Labs’ mission is to eliminate cigarette smoking by offering existing adult smokers in the United States with a better alternative to combustible cigarettes,” according to a company email attributed to Tyler Goldman, CEO of JUUL Labs. “JUUL is not intended for anyone else, including underage consumers and thus, no student at Palo Alto High School — or any high school — should be in the possession of a JUUL product.”

But they are. In fact students who do not wish to partake in this activity are faced with several problems. Often, they may feel coerced into participating in Juuling in order to avoid being labeled as “uncool.” Other students may feel that by not reporting what they witness, they are going against their moral code.

“I have friends who do it, and I don’t want them getting in trouble, but I do try and tell them it’s bad,” Julia said.

In addition to such social dilemmas, students who do not actively Juul are exposed to unwanted health risks such as secondhand nicotine inhalation.

“I never want to inhale the secondhand vapor, so I try to leave when people are in the bathroom Juuling,” Julia said. “It can be really hard to find a clean-aired bathroom.”

Junior Julian also expressed concern about the possibility of sickness but found a simple solution that works for him. “I mean …  germs can spread and people can get sick, but as long as you wipe it and not share it with someone who looks sick, you are pretty fine,” Julian said.

According to Jennifer Kleckner Paly’s school nurse, spreading germs is a concern, along with the risks of brain impairment, lung inflammation and exposure to carcinogens.

Not only does Juuling affect students’ health, but it is also seems to be impairing Paly’s learning environment. Students will leave class to go Juul, which can result in missing important material.

“I have friends who are really addicted to Juuling, and will leave in the middle of a lecture to just go Juul, and end up missing important things in class. Sometimes I leave to go, but I try to only leave during brunch or lunch, so I won’t miss class.”

According to Berkson, when students are truly addicted to nicotine, they may have an urge leave class to feed their craving.

“I would hope that the addiction isn’t so strong that they wouldn’t need to leave class to just vape,” Berkson said. “But if kids are addicted to nicotine, then I wouldn’t put it past them for them to leave class.”

Berkson acknowledges the difficulties in apprehending students. “But then again, it’s so easy to just go around a corner and take a hit, and because it leaves so quickly, it’s hard to find,” Berkson said.

According to Berkson, the administration will be keeping their eyes out for students who are vaping and listening to students who provide tips about locations.

“My best advice is just don’t get started,” Berkson said. “A lot of younger kids are vaping, and it is because they want to beat the man. It’s an early form of being rebellious. And once they master vaping, they can move on to harder stuff, and it’s just not worth it.”