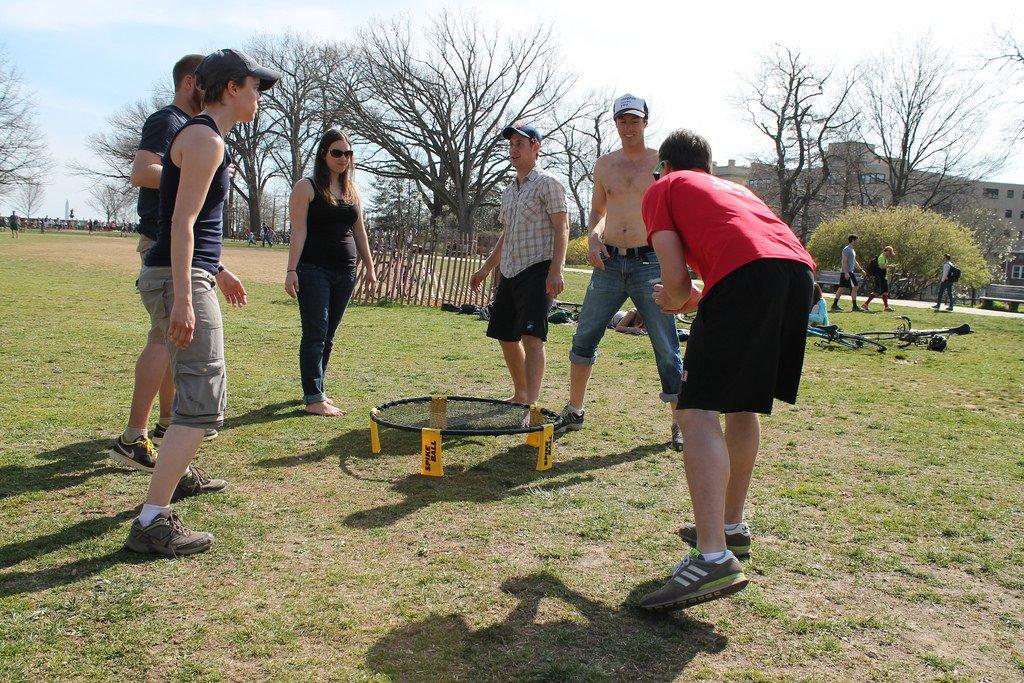 There is a fascinating new club joining what was already an immensely interesting array of Paly clubs: Spikeball Club. Spikeball Club is, as the name implies, a club in which the game spikeball is played.

Spikeball is a playground game with rules similar to those of volleyball and Foursquare.

“Spikeball can be described as if volleyball and Foursquare had a baby,” said senior Nicholas Blonstein, the club’s president. “It’s played around a trampoline net that’s about six or eight inches off the ground, and it’s circular in shape. It’s two on two and each team has three hits, which have to alternate between each people, to get it back onto the net. And simply, the first team to let the ball hit the ground loses the point. The catch is, there are no boundaries, you can play 360 degrees and you can hit it as hard or as soft as you want. And that’s where the game gets really fun.”

From now until finals week, the Paly Spikeball Club will meet on the quad at lunch and students will be able to come and try out a new sport, and maybe discover something for which they have a passion.

According to Blonstein, spikeball has been gaining lots of traction as an up-and-coming sport.

“It’s a super fun extracurricular activity,” Blonstein said. “They even have a national league of spike ball teams. There are over 1,500 nationally ranked teams.”

Spikeball is becoming so popular because of the many ways it can involve others. For Blonstein, it was a knock-off version of the game that introduced him to, and eventually hooked him on, the game.

“So, not this past summer, but two summers ago, my aunt bought my cousins a ‘Slam-o’ set, which is a spikeball knockoff, essentially the same thing, just cheaper,” Blonstein said. “And we started playing it, you know we were getting into it, we were trying the game out, and we got hooked pretty soon. We ended up playing it all that summer, and then we got back to it this summer, and we started playing again right away. And that’s how we got into the game, playing in their front yard.”

One current senior learned about the game of spikeball through a friend.

“I’d never heard of Spikeball before, but one of my friends has a spikeball net and invited me and some other people to play over this past summer,” senior Julia Doubson said.

A former Paly student, who also enjoys playing spikeball, got hooked playing it with friends to pass time at picnics.

“I got into spike ball because one of my best friends bought it, and we played it at picnics and when we have free time. I would totally recommend learning. It’s easy to learn, a good way to get moving, and a ton of fun for a group of four.”

Spikeball Club is a club that Logan wishes had existed when she was at Paly.

“I wish there had been spikeball [when I was a Paly student], because I think it would have brought different friend groups together and bridged class years,” Logan said.

So when Wednesdays roll around and you are in lieu of plans, refrain from forgetting about the possibilty of attending of Spikeball club.

Doubson already has plans to attend the club.

“I am planning on attending Spikeball club and I am looking forward to it,”  Doubson said.

Blonstein hopes other students will follow in Doubson’s footsteps and give his club a chance.

“Come out and play. It’s easy to learn. It’s super hard to master, but that’s what makes it so fun. It’s easy to set up so grab a couple of friends, and it’s a great way to spend some free time.”