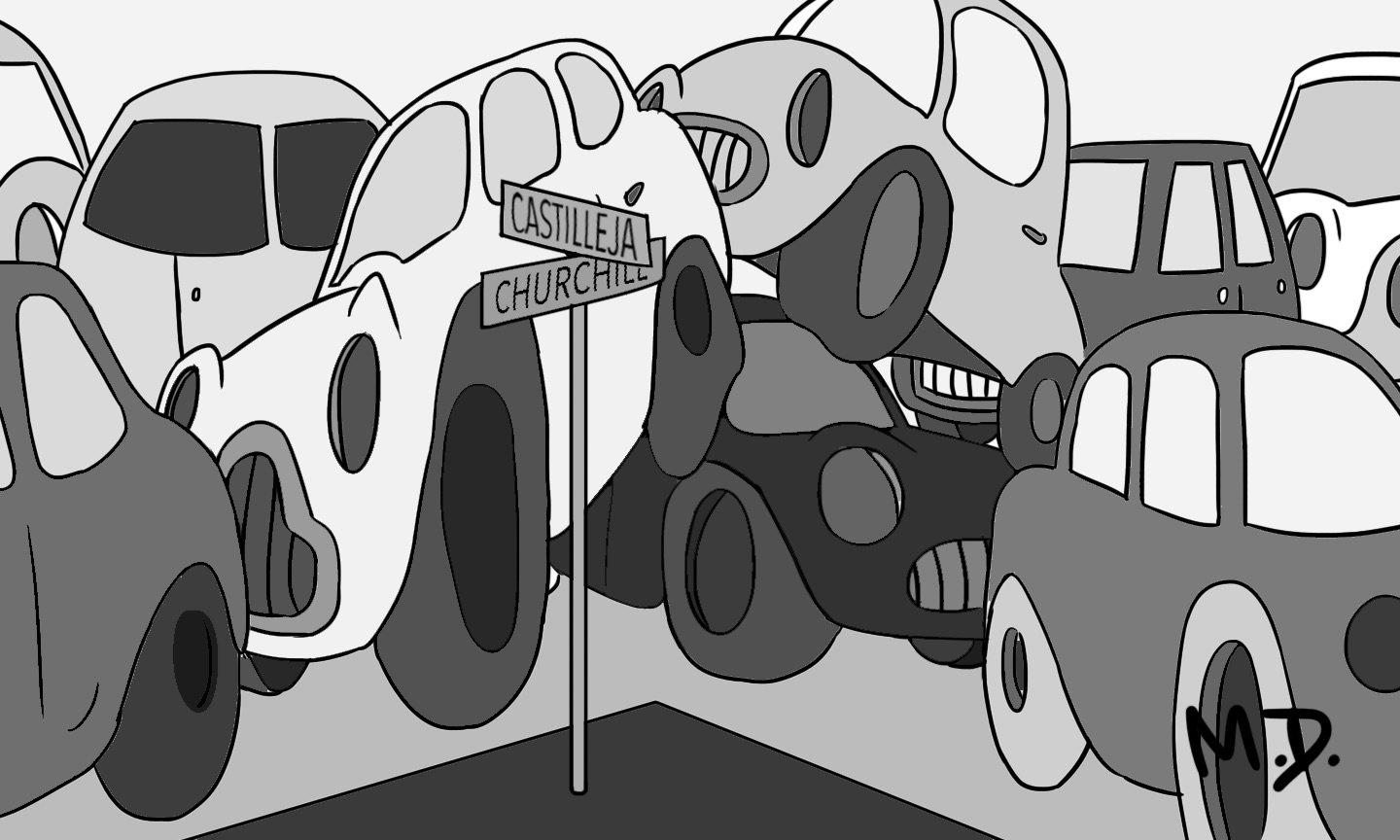 A chaotic and nightmarish stream of cars, bicyclists and pedestrians ensues each school morning at the cross section of Churchill Road and Castilleja Avenue. The abrupt halt of cars to accommodate for student bikers’ complete disregard of stop signs raises eyebrows, as one wrong move from either party could cause a massive collision.

From Castilleja Avenue, hordes of bikers enter the Churchill parking lot by cutting off the cars, who legally have the right of way. Approaching from Churchill Avenue, bicyclists who have strayed away from the designated bike path hurriedly make wide right turns into the lot, making drivers nervous to turn right simultaneously.

To avoid this mosh pit of vehicles, some parents have resorted to dropping their students off as far as Coleridge Avenue, across the train tracks, despite the additional 10-minute walk for students to reach campus, which often is even less time-consuming than waiting in the traffic.

“I would definitely drop my kid off [in the parking lot] if it were more convenient to do so,” said George Tang, a parent of a Paly student. “Dropping kids off at Coleridge is more of an inconvenience for the students.”

The Churchill parking lot would be ideal for parents dropping off students with their bikes, as the largest bike racks are located close to the football field; however, the lot is instead dominated by parking spots reserved for staff and only has one opening to both enter and exit, creating extra traffic.

The lot itself is poorly designed and lacks sufficient space; the row of parking near the opening of the parking lot poses a serious safety concern. Drivers must back out of those spots into the long line of cars waiting to leave; however, students resort to parking there because the large section of the parking that is closer to the baseball diamond is, understandably, secured for teachers. Additionally, with various construction projects obstructing 20 plus designated staff parking spots, less parking permits have been sold to students, according to the Associated Student Body Bookkeeper Fatima Giffen and Assistant Principal Jerry Berkson.

On the other hand, the Embarcadero parking lot, which has two openings that operate as both entrances and exits, has a more efficient pathway for parent drivers to navigate. While there is still traffic at either opening of the parking lot, the line to drop off students is clearly marked and designated by campus supervisors.

Lacking the same regulation and order as the Embarcadero lot, the Churchill lot is a less feasible option for student drop-offs.

“[In the Churchill lot,] there should be better indications of where the students can be dropped off and picked up and the lines on the ground are more clear as to how the traffic should run,” Tang said. “In general, the parking lot should have more signs to make it easier to navigate.”

According to Berkson, the reason there are no campus supervisors in the Churchill lot is because administration wants to direct dropoffs to the Embarcadero lot to prevent the traffic that would amass on El Camino. However, if there is traffic around the Churchill lot, there is more reason to assign campus supervisors to that lot because the priority should be for the school campus to be accessible for students from all directions.

Hordes of bikers enter the Churchill parking lot by cutting off the cars, who legally have the right of way.

Unlike the Embarcadero lot, the Churchill parking lot only has one passage to the road for cars, restricting the entrance and exit to one outlet. This forces drivers to make a long, windy loop within the parking lot, which makes the already-crowded parking lot more hectic.

Additionally, the two-way stop sign inhibits cars within the parking lot from turning left until traffic coming from the train track and El Camino directions are halted by the lights or stopping despite having the right of way. This often culminates in a long line, filling the small parking lot and increasing waiting times.

To reduce chances of a traffic accident, at the very least, the Churchill and Castilleja intersection deserves a four-way stop sign and school officials regulating the traffic flow both in and out of the lot to aid drivers trapped inside the parking lot. The school should also consider an expansion and redesign of the dated and narrow parking lot to accommodate the number of student drivers in need of parking to make the lot a more viable drop-off option for parents.