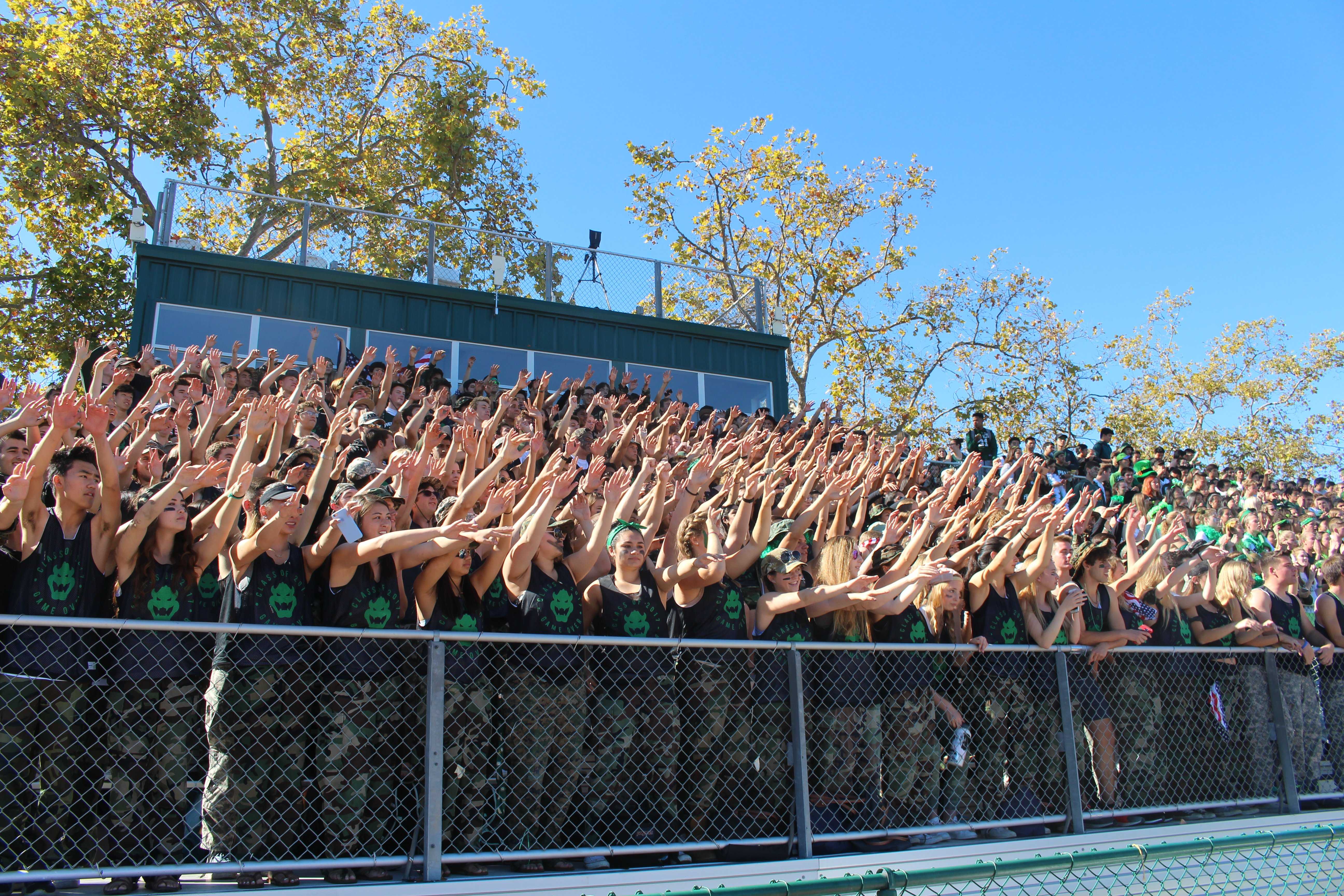 A close look at rising expectations of upcoming Spirit Week

Once a year, the students of Palo Alto High School transform from ordinary teenagers to cranky senior citizens, rambunctious cowboys and cowgirls, sharp businessmen and businesswoman, rather large babies and more. They cover themselves from head to toe in their grade’s designated color, causing the local stores to sell out of random orange, red, yellow and green apparel. They dress in these creative, extravagant costumes to prove that their class is the most spirited.

During this week, the deafening roar from the football stands can be heard from miles away. Camera rolls fill with silly memories to be cherished for years. The students’ infectious smiles and enthusiastic screaming of chants can only be described with one word: spirit.

With the famed Spirit Week just around the corner, students buzz with passion for their class and build high expectations for this year’s Spirit Week.

“I expect the junior class to win, and I am excited to see how we compete this year as compared to last year and how we develop as a class,” said junior class vice-president Ben Rapperport.

For some students, it is the thrill of the entire week they are looking forward to. For others, a specific part of the week sticks out to them, such as the spirit dance, float building, games at rallies or dressing up.

“I am most looking forward to the spirit dance, because we have amazing choreography planned.”

Natalie Churchley, a leader of the junior spirit dance.

According to Churchley, so far the main struggle she has faced is getting more people to participate in what she says will be a great experience.

Wide participation in the spirit dance is crucial to the success of each grade’s dance, because the more people participating in the dance, the more points the grade gets. There is also a minimum requirement of five girls and five boys for each grade level’s dance, which has been an issue for some grades. In addition, more participants in the dance will make the performance more impactful overall.

“We don’t have as many people as we would like for spirit dance, and we would like to encourage more participation,” Churchley said. “We would love it if people come to practices; it’s relatively low commitment and it will be really fun.”

Julia Asher, a leader of the senior spirit dance, has had similar challenges thus far.

“[In] senior year there are a lot of things to do, such as college applications, grades and teachers’ rec letters,” Asher said. “People showing up to practices has been difficult and finding a time for everyone to come, because during tutorial everyone is here but they have to go see teachers.”

Asher has combatted this challenge by creating additional chances for her peers to have the opportunity to participate in the dance despite their busy schedules.

“[We’ve been] making lunch practices, after school practices and weekend practices for those who can’t make it at tutorial. We really want to ensure that everyone who wants to participate can, because it’s [our] senior year. But [seniors’ absences] create challenges with formations because we can’t set people without everyone being there.”

Despite having the same struggle with encouraging peers to attend dance practices, Taylor Yamashita, a leader of the sophomore spirit dance, remains optimistic the spirit dance will ultimately have a hugely positive outcome.

“I’m definitely hoping that spirit dance brings everyone together and brings our class closer,” Yamashita said. “I’m hoping that we’ll all have a lot of fun.”

Dancers are not the only ones excited for the spirit dances; Student Activities Director Matt Hall is also looking forward to seeing the final outcome of each classes hard work..

“Nine times out of 10, I get a little preview of the spirit dances, but you don’t get a sense of it until they’re out there on the field, all hundred kids, all in the outfits and the color,” Hall said.

In addition to the spirit dances, float building is a prominent part of Spirit Week.

According to David Foster, a float designer for the junior class, he has been designing since the summer when themes were first pitched.

Class officers and their float designers have submitted their designs to Hall as of Oct. 13 and are working with Hall to get the necessary materials.

“I always look forward to the floats,” Hall said. “I love to see what they become over time. When they start out on the first Saturday, you’re just looking at something that’s nothing, but the last day on the field, when they pull them out and they’re all bedazzled in color and shape, man, that’s great.”

Each year, passionate students toil away in the autoshop for hours, painting, gluing, ripping and working together in hopes of building the reigning float. In each grade, there are several key leaders behind these ambitious projects.

“We have a few builders, a few people that lead the art and Caroline [the class president] and I are going to be there to help build — because we’re there almost every day of the week — and to help lead and oversee the float building process.”

One of the key parts of making each Spirit Week unique is the class themes, which are represented in both the spirit dance and the floats. This year, the freshman class has voted for their theme to be Nickelodeon, the sophomore class has selected racecars, the junior class has chosen rubber duckies and the senior class will be showing their spirit through the theme of Monopoly.

Though not all students were in agreement of each of these themes, some have been swayed as planning for Spirit Week goes on.

“At first I wasn’t excited for rubber duckies, but after looking at our spirit dance, song and float and thinking about some ideas of how to dress up, I’m very hyped,” Rapperport said.

Other students have been onboard from the start and are looking forward to finally beginning Spirit Week festivities.

“I really like the theme [of Monopoly],” Asher said. “There’s a lot of songs just about money and we are also using canes, so it works well, music and dance wise.”

Yamashita is also fond of her class theme of racecars, and said the theme provides many opportunities for a great spirit dance, specifically with the abundance of music which suits the theme.

Though the themes are a large part of the spirit dance and float, other aspects of Spirit Week have different focuses. These include the games played at rallies, the annual dress-up days and the homecoming dance. Spirit commissioners Samantha Embersits and Sarah Mitz have been doing a lot of planning behind the scenes to improve these aspects of Spirit Week.

For Mitz, one of the biggest goals of this Spirit Week is encouraging inclusion and participation from everyone.

“I hope that we make a Spirit Week that everyone really enjoys and include as many people [as possible] and [have] activities that people who are scared of participating will join in. We made a relay that has 34 people in it per grade so that people can participate and have it not be as high stakes.”

In addition to promoting inclusion of all students, the two spirit commissioners have worked to provide opportunities for teachers to show their spirit as well.

According to Embersits, for the first time in seven years, there is a dress-up day for teachers every day of the week. Teachers will also have additional chances to participate in the rallies. According to Hall, there will be a teacher finalist battling the student finalist in the Thursday advisory rally in the three-point basketball contest.

The spirit commissioners have been planning a number of new games for spirit rallies as well as refining old games such as Tennis Ball Bounce, which will be revealed in the instructional videos on the rally games.

Students can also look forward to Pantyhose Bowling, which will be debuted this year. In addition, a new and improved version of Name That Tune will be played at a rally. This year, Name That Tune will be much faster and the songs have been selected with more student input in order to make it easier for the contestants, according to Embersits.

Hall hopes that the adjustments will result in a better outcome of the game this year.

Some other changes this year are the replacement of the night rally with the Thursday advisory rally, according to Embersits. This change goes hand in hand with the addition of the new gym, which will be utilized in the Thursday rally.

“Now we can return back to our roots, the classic advisory rally on Thursday, [which includes the] 3-point contest [and having] the whole school in one enclosed, inside space. Man, it is going to be loud in there. It is going to be crazy. I remember how it used to be in the old gym, and it was fantastic.”

The crazy and loud energy Hall is expecting for the Thursday rally will also be present in the homecoming dance, which ends Spirit Week. For the past two years, the homecoming dance has been held off-campus due to the construction of the new gym. This will be the first dance to be held in the finished Peery Center.

The set location has enabled ASB to be able to pay even more attention to a set theme, food, decorations and music.

Ultimately, Spirit Week is about bringing the school together to bond over passion and pride of Paly. The loving and spirited atmosphere at homecoming dances is representative of the community built throughout Spirit Week.

Going into Spirit Week, Hall and all the student leaders strongly encourage students and staff to get involved in as many ways as possible.

“We want inclusion; we want as many people to be involved in some way, shape or form,” Hall said. “Doesn’t mean you’re in the game, maybe you’re just dressing up. Maybe you’re in the dance. Maybe you’re building the float–you’re just doing tissue. But we want to see a lot of people. Ideally for me, I’d love to see all 2,000 students doing something, even if it’s just dressing up one day, getting involved, in some way.”