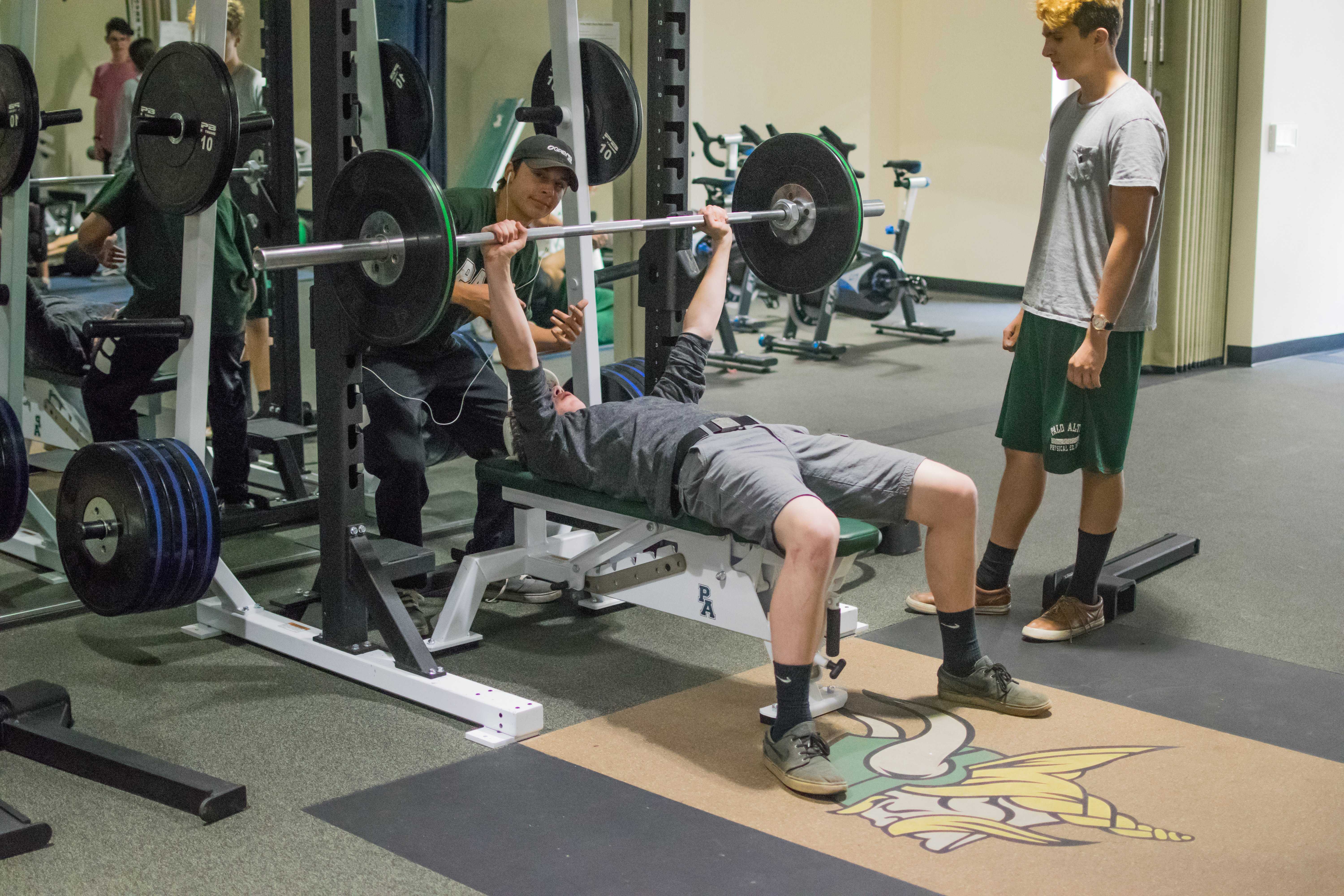 Enter the Perry Center Gym on any given day, and you are sure to find a crowd of students, non-athletes and athletes working out together. From water polo to golf, most, if not all, of the sports teams participate in group workouts, strengthening their muscles to improve performance. However, weightlifting is not solely utilized to refine one’s skill. Many lift to improve their experience in hobbies, others to stay fit and active and others even to lift competitively.

“I actually was in crew and volleyball before I started lifting,” said senior Gabby Bernas, a competitive weightlifter. “My feet had started to hurt a lot and so my dad started strength training me. We bought a lot of equipment. Although I stopped [crew and volleyball], I continued to lift.”

Lifting is an important part of living a healthy and active lifestyle. It exercises muscles one would not normally use in everyday life, ones that are important in sustaining a healthy mind and body structure.

Bernas is also the president of Barbell Club, which is involved in spreading the word of weightlifting and physical fitness.

“For people who aren’t involved in any sports, lifting is a good way to keep your body moving, your blood flowing or to take a break from studying, especially since it only takes an hour of your day. I went to college tours and I found out they had weightlifting clubs, and I realized Paly didn’t have one so I thought maybe I could start one.”

Bernas leads a rather active life, with an even more strenuous workout routine. For four days in a week, Bernas lifts. She takes two days to work on her sprints, and takes one day off to rest. Through lifting, Bernas has learned the importance of a consuming a balanced diet. She also stresses the significance of proper rest.

“I’ve had times where I haven’t gotten enough sleep and my legs hurt because they couldn’t fully recover,” Bernas said.

In terms of diet and nutrition, Bernas said she sticks to a low carb, no sugar regimen. Rather than eating sugars, Bernas prefers to consume protein, especially after a workout.

Although Bernas started weightlifting through competitive sports, she now lifts competitively, and urges others to hit the gym as well.

“I really want for weightlifting to have more awareness,” Bernas said. “I like that there’s an environment where everyone else is lifting, but it can definitely grow.”

Unlike Bernas, senior Andrew Huang started lifting because of  his hobby, surfing.

“I heard there was a weight room at Paly that was open for students, and you could use it whenever it was open, so I started going there,” Huang said.

Although considered by many a recreational activity, surfing requires a lot of physical fitness and athleticism.

“Most of the effort you put into surfing is upper body — like paddling out, duck diving and catching waves,” Huang said.

Huang uses weightlifting to strengthen his upper body and help him improve on surfing.

“It’s really strenuous on the upper body so I work out mainly my back and shoulders.”

Although Huang has been surfing for a while, he has only recently started lifting.

For diet and nutrition, Huang said he mainly pays attention to his protein intake.

“I keep track of how much I eat,” Huang said. “Mostly protein, that I eat every day. I know I should be watching other stuff too. Protein doesn’t really do much without other stuff in the right proportions.”

Regarding his lifting schedule, Huang said lifts up to three times a week. In order to motivate himself, he sets up a small, personal goal each time he lifts.

“If I’m pulling some certain weight, I’ll try to increase it by a little bit, see if I can do that,” Huang said.

Junior Dion Li is also a regular at the weightlifting room who initially joined for wrestling.

“I really liked the practice of weightlifting, it allows you to take your mind off of school and everything else,” Li said.

Li also does his weightlifting in complement with jujitsu so he can give his body the ultimate physical experience he desires. Yet despite Li’s hard working spirit, he is smart about his exercising. Li prioritizes his happiness over physical fitness so as to not lose his motivation for lifting. However his priorities were not always in order.

“When I first started, I had a goal of going every single day, which I realized was super unrealistic,” Li said. “Now I go whenever I feel like it, like three times a week. At first I had a set schedule, but now I work out whatever I want or need to do.”