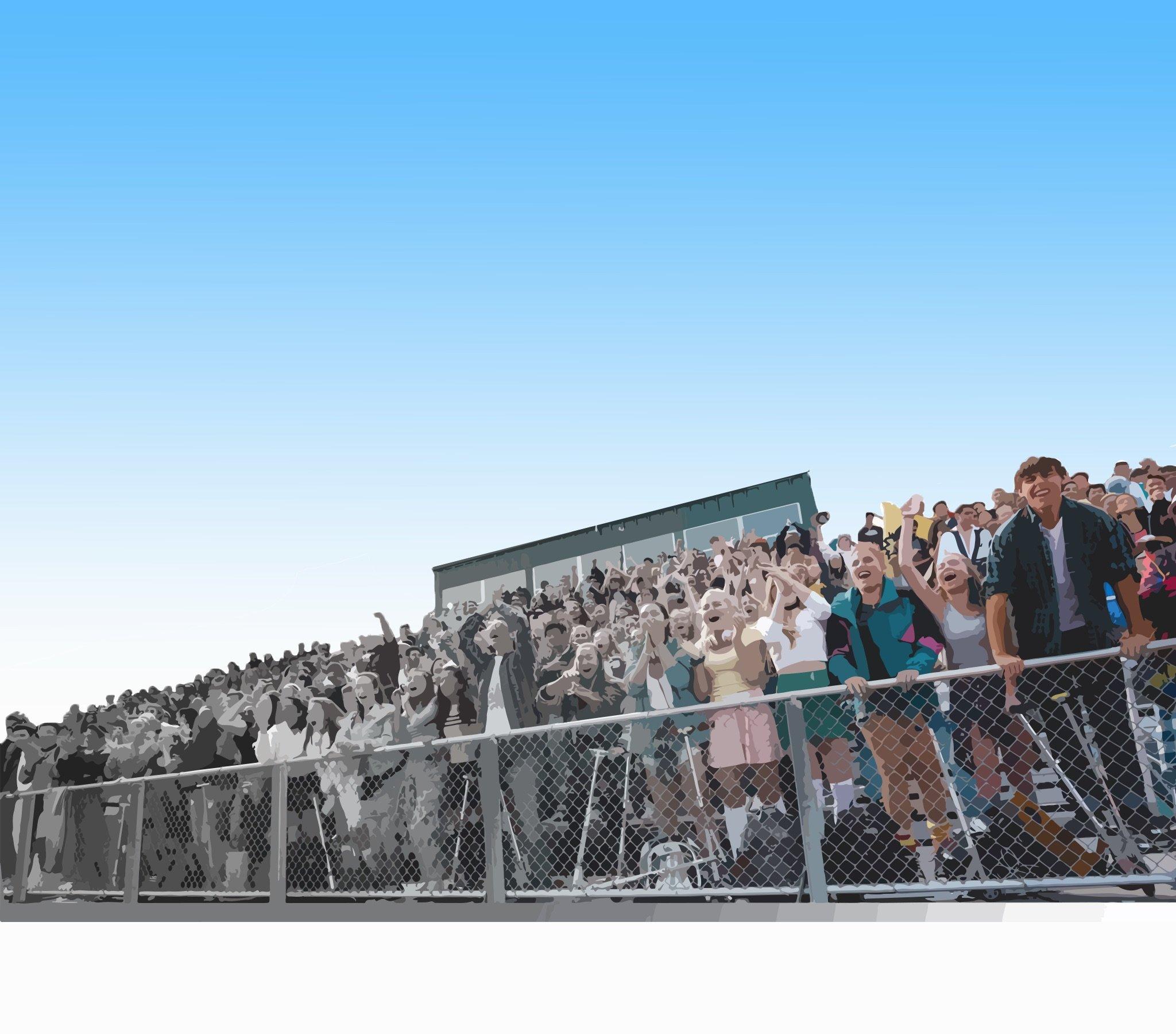 Spotlight: The History of Spirit Week

Spirit Week and all the wild rallies, spectacular dances and intricate floats it’s comprised of may be all-encompassing when it comes to school pride and spirit. Few people, however, know of its origin, or the school-wide events that existed before it.

Rewind. The time is 1 a.m. and the date is Oct. 21, 2016. Junior class president Jaiveer Sandhu stumbles into the darkness, leaving the Palo Alto High School auto shop where he had spent all day working with class members on a massive, mobile construction of wood, metal and paint — the Spirit Week float. In about 14 hours, nearly 2,000 students, as well as family, staff and community members will arrive to see the product that has kept Sandhu and his classmates at work for the majority of the past week. It will be his job to ensure everything moves according to plan.

Rewind 36 hours. It is Generations Day, and each grade has dressed as an age group. Sandhu is jumping on a table, hyping up nearly 500 fellow juniors through a series of lunchtime chants, each one more repetitive and energetic than the last. The crowd, all dressed in formal attire, moves in rhythm with him as he leads them, following Sandhu’s lead in a near-hypnotic manner.

To his right, a similar scene plays out among Paly’s seniors who are dressed to resemble the elderly, while to his left, the sophomore class, dressed to resemble greasers, recites a wave of couplets, matching the overwhelming energy of the two previous classes.

Rewind two days, and he is back in the auto shop, as he had been for the last week every day after school. Swarmed by members of his class, he shoots down questions one by one, deconstructing the massive job of the float into smaller tasks. A group of four paints a crowd on the front of the deck, while another student builds a boxing ring, complete with a smoke machine. Finally, other students find any work they can, stuffing the back side of the float with colored paper or covering the ring’s floor with swaths of mahogany paint.

According to a 1967 Campanile article, from 1927-68, the Girls’ Jinx was a popular, school-wide event. An annual variety show featuring skits, pantomimes and a plethora of performances, students looked forward to the Jinx all year.

In the beginning, performers were exclusively female, but in 1967, the Jinx became co-ed by popular demand, and male students began performing in skits alongside their female peers.

Ainsley Baven, a Paly alumna, said the Jinx was “an incredible masterpiece that showcased student talents and encouraged school spirit.”

Participation open to all grades, the Jinx brought students together to unleash their creativity and marvel at their peers.

The Jinx was canceled in 1968 when English teacher Jon Phillips stepped down from his role as director, citing a busy schedule. With no faculty member volunteering for the position, the Jinx faded into the history books and Spirit Week took over.

According to the article, with no Jinx to look forward to, anticipation for Spirit Week consumed the school.

Class representatives geared up for Spirit Week, and began prepping for a new competition featuring hall decorations. Restricted by a $20 limit, grades competed by decorating the main halls with banners, balloons and streamers.

Rewind to Palo Alto High School in 1951. From 1951-65, participants in Paly’s Friendship Week were given an opportunity to grow closer to their school community.

Not a lot of the Paly students participated in these activities. Attendance dwindled during the first few years of the annual event.

The week was sponsored by what was known as the Boys’ and Girls’ Leagues.

In the week’s debut in 1951, sophomores were required to wear green and white beanies to school on one of the days. Sophomores continued to wear them at home football games.

The Soph Tyro and Big-Little Sister dinner were both initiated in 1952, with hopes of increasing student participation in the events, according to an edition of the 1955 Campanile.

Beginning in 1961, however, interest in these activities began to decline. The system in place had a problem.

The disengagement got to the point in 1964 that the annual sophomore boys barbecue was canceled for “lack of interest.” Few students came to school with clothes corresponding to the dress-up themes.

At some point throughout the Friendship Week era, the week was replaced with a single dress-up day, and according to a 1955 edition of the Campanile, more of the student body got involved. Things remained this way for some time.

Fast forward to 1968. The time is 7:30 p.m., and a massive crowd has gathered in the fields around Stanford University. A man moves to the center of the crowd, where a tall pile of wood looms in front of him.

He raises a torch, commanding the attention of the group. Silence pours over the crowd, and the man leans downward, lighting the pyre aflame. The crowd explodes, students jumping and reciting chants and poems.

This was the scene at the annual Paly bonfire, a key part of Spirit Week later discontinued and deemed a fire hazard; however, much of Spirit Week during this time still exists.

Fast forward to 1978, and the scene is much like today’s. Crowds of students gather, standing on bleachers and looking down as classmates compete in tug-of-war, dances and competitions for best-dressed.

Generations Day has begun, and the attire would seem familiar to Paly students. Freshmen dressed like babies, sophomores dressed like greasers, juniors dressed in formal wear and seniors in dressed in grey wigs and walkers.

Floats paraded around campus, and thousands flocked to watch Paly hammer Gunn in the annual Homecoming football game. The senior class took home the crown, and the event that is known today as Spirit Week had finally taken shape.

“[That] particular year chose to use camo as their green theme,” said Paly math teacher Arne Lim. “The juniors liked it so much that they continued that idea of camo the next year and it’s stuck since then.”

Fast forward to 2001, and students gather around the quad at lunch. It is a typical lazy, post-AP-exam spring scene on campus. Suddenly, commotion strikes. The crowd quickly parts and students fight to get in front of one another, engrossed by the uproar of their fellow classmates.

Two bodies, devoid of clothing, sprint from one end of the quad to the other before pulling themselves into a jet-black car and speeding off. It is the fourth streaking incident that week.

The first Paly Streak Week landed and lasted for over a decade. Over that time, it is estimated that over 75 streaking incidents took place on Paly campus.

But while the tradition of streakers at Paly may have diminished, recently, streakers have moved away from the small crowds of Streak Week to a much larger audience: Spirit Week.

Fast forward to Spirit Week 2016. Assistant Principal Jerry Berkson sits in his golf cart at a lunch rally, hidden from view by tree cover. He watches the football field with the eyes of a hawk, looking for a streaker.

And suddenly, the crowd’s cheers become significantly louder and unified in one direction. Berkson looks out and spots his target. A teenage boy, covered in paint, sprints length wise down the football field, making his way down the field in plain view of the student body.

He revs up the cart and takes off, but it is too late. The streaker effortlessly climbs a fence and disappears into the patchwork of Palo Alto’s Southgate neighborhood.

Fast forward to the early hours of Friday morning. Sandhu makes his way home, stumbles into his bedroom, and collapses into a deep sleep.

His work will not be in vain. His float will not only land the first place in the float competition, but also a spot in local papers.