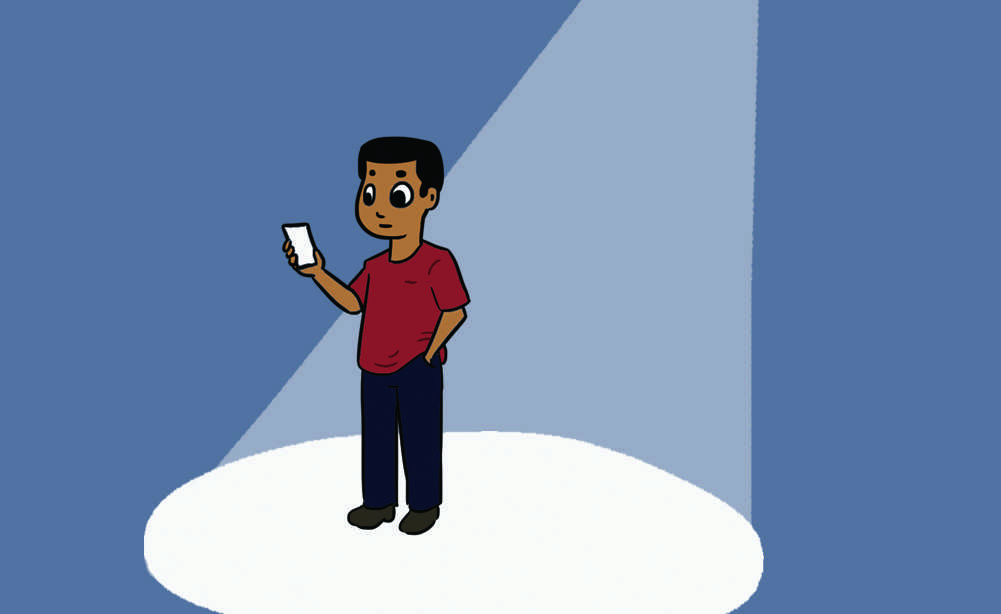 Online, your gut feeling is right. “They” are watching your every click, every day, tracking and recording what videos you like, what music you stream, who you chat with. And all of that data you create belongs to “them.”

“I feel that the vast majority of the time I do not have privacy online. For example, anything I post on Facebook is recorded in the system forever. Anyone can Google my name, and my post will come up. The fact that employers do these checks exposes the inherent fact that it does not seem like we have a lot of privacy online. So while we have a lot of freedom online, with that freedom comes responsibility.”

Society today is ruled by electronics. With smartphones, laptops, televisions and even a slew of wearable gadgets, technology has become an increasingly accepted part of everyday life. But technology’s expanding presence in daily activities has provided companies with mass amounts of personal data, including phone calls, text messages, internet activity and travels.

You might think this data belongs to you, but you’d be wrong. Have you read the details of Apple’s Privacy Policy? It essentially states Apple can track your use of any of their products and use that information as they see fit. We’ve probably all blindly agreed to similar Terms of Service with other social networking companies including Facebook, Instagram and Snapchat. What these companies do with our data is up to them. The power these companies hold has the potential to shape our lives and the future of the digital world.

The Fourth Amendment of the Constitution is often cited as the protection of a citizen’s Right to Privacy in the United States. In the digital age, however, privacy hardly exists and is often surrendered with the click of a mouse on your favorite website.

When Edward Snowden decided to leak documents about the National Security Agency’s (NSA) surveillance program on American citizens, he exposed the most extreme example of digital surveillance. The government recording phone calls, analyzing text messages and watching all online access on an enormous scale with no judicial oversight surprised the public and was widely seen as a landmark intrusion on privacy.

Snowden exposed the extent of government invasion of privacy, but many intrusions were commonplace and noticeable before the NSA leak. For example, have you ever noticed targeted ads consistently popping up on websites? After searching for an item on Amazon, seemingly by magic, advertising for similar products start appearing when you visit other websites. These ads aren’t just random coincidence.

“The fact that ads are based on your previous search history certainly confirms that companies are tracking your activity,” said junior Nathan Ramrakhiani. “Overall, I think that anything you say online is not private and I think that’s something we need to accept as part of the new digital age.”

When users shop online, websites analyze and store this information, using the data to show relevant ads catered to the customer’s interests. That’s how companies make money on the internet and provide services. This feature demonstrates the lack of privacy online and shows how users have sold privacy to pay for “free” services.

“Surveillance is the business model of the internet,” said cybersecurity expert Bruce Schneier in an interview with the Harvard Gazette. “Everyone is under constant surveillance by many companies, ranging from social networks like Facebook to cell phone providers … Personalized advertising is how these companies make money, and is why so much of the internet is free to users. We’re the product, not the customer.”

At Paly, students recently lost a little more privacy. Palo Alto Unified School District (PAUSD) has implemented a Chromebook policy that allows the school and parents of students to view all activity on school Chromebooks.

Students using school-issued Chromebooks have no privacy on the internet, and the District has expanded on the policy. The school is planning to require students to sign in with their student IDs to access school WiFi effective this winter when the PAUSDGEN WiFi network is decommissioned. Signing in allows the school to track all activity on all devices on WiFi, not just on school Chromebooks.

“I can see why the District would see [the WiFi policy] as beneficial in order to prevent people from being off task in class, but I think that they shouldn’t be allowed to do that because students shouldn’t have to worry about always being monitored whenever we’re on the internet,” said junior Stan de Martel.

PAUSD Chief Technology Officer Derek Moore, however, said the Chromebook policy aligns with the goals of Paly and benefits students.

“The WiFi networks in our schools are intended primarily for instructional purposes; however, we know they are used for many personal purposes as well. We have a duty to ensure access to instructional resources is prioritized on our network, and moving forward with user identification we now have a more granular mechanism to throttle individual users as appropriate without blocking entire applications altogether.”

There are large risks with so much personal data being readily collected. Data breaches occur frequently, putting personal data into the public domain. In August 2013, Yahoo was breached and every account’s data was impacted. On a smaller scale, Infinite Campus was anonymously hacked last month and all GPAs and ranks of Paly students were at the mercy of the hacker. According to the Federal Trade Commission, the exposure of personal data has serious repercussions including identity theft, which can lead to a loss of money and other negative harms.

“The reality today is that there is a massive amount of information online,” Moore said. “I don’t see the world going back to paper-based record management, so this [large amounts of available data] is an issue that will need solutions developed today and into the future.”

The digital age is a welcoming sight for many. After all, electronics have many benefits in entertainment, work and school. Individuals and society must be aware of the related harms.

People must be careful of digital footprints and be conscious that the information they put out online can be accessed by companies with only mild regulation.

As technology continues to grow, remember it is watching, measuring and reporting on you as well.

Ramrakhiani said, “I am concerned that lack of privacy is part of a greater trend. At what point does privacy cease to exist?”