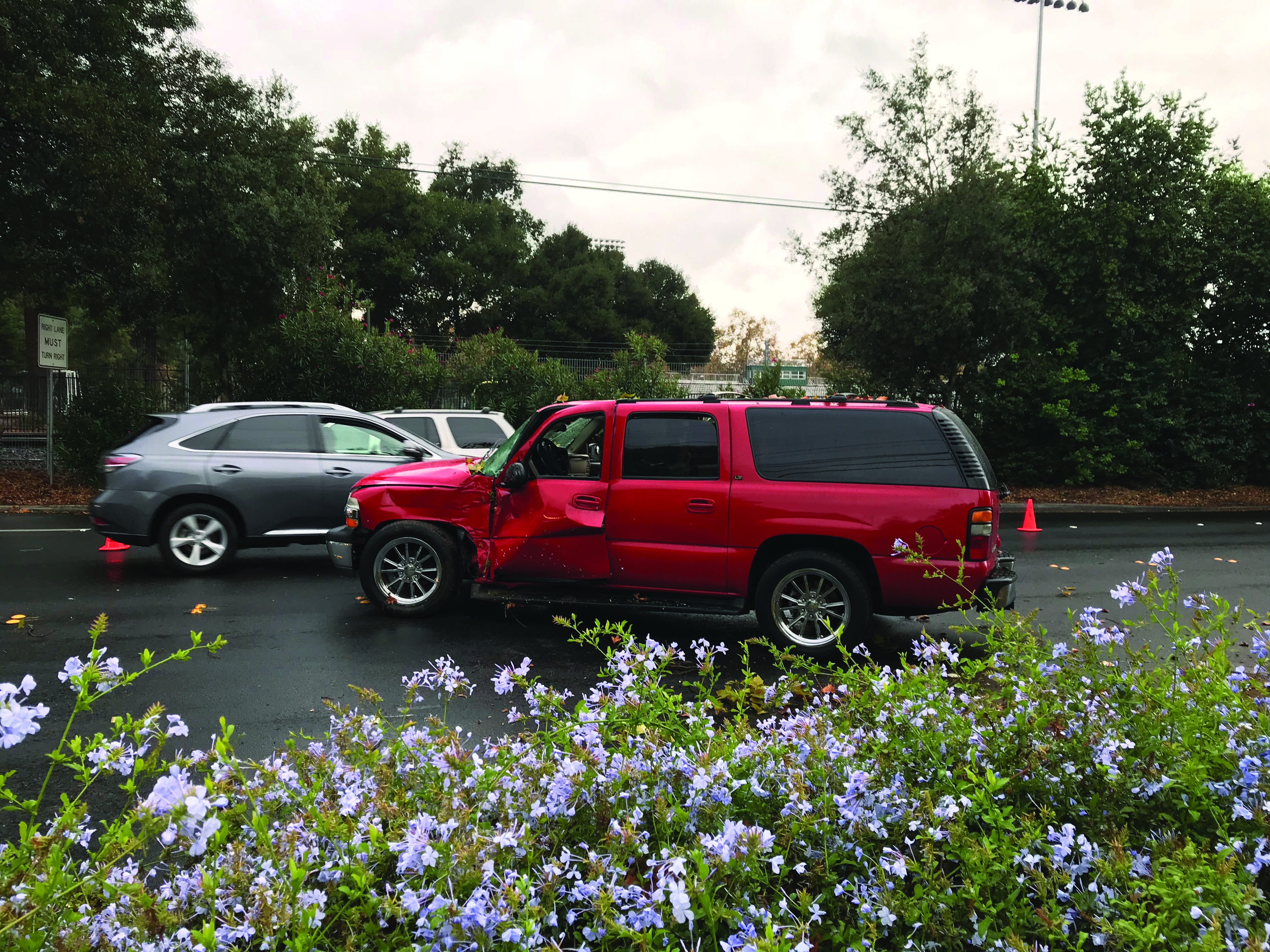 Just days after a terrorist rammed into a busy New York bicycle path, killing eight people, Palo Alto High School students had their own close calls with rogue vehicles. In one incident, last Monday, an unidentified motorist sped through campus and onto Embarcadero Road, nearly hitting students on their lunch break. Two days ear        lier, five Paly varsity football players were involved in a car accident within blocks of the school, injuring two of the players.

The case of the speeding car was a startling reminder of the vulnerabilities that accompany an open campus like Paly, where anyone can freely drive through the school’s roadways and parking lots.

“The parking lot is open, and so it’s not restricted,” said Palo Alto Police Officer Brad Young. “There’s no blockade to prevent traffic from coming into the parking lot.”

Although the incident in New York occurred on an exposed area, directly along a major thoroughfare, the potential for a reckless drive-through on an open campus does exist.

Two Paly campus supervisors, Scott Reese and Carl Hubenthal, instantly sensed the hazards posed by the errant driver. They  saw the unidentified man  behind the Performing Arts Center suspiciously banging on the roof of his car. Hubenthal attempted to approach the man but the man sped off in the car towards the back of the 300s building, where foreign language classes are taught, and then back towards the exit of the parking lot.

“It just seemed like he lost his temper. He threw the car in reverse, hit the accelerator real hard, and hit the curb at a fair speed. He went down about 50 feet or so down the curb breaking pieces of the concrete of the curb, turned into the cyclone fence right off the curb area.”

Reese recalled holding back students, with Hubenthal, from the reckless car.

“Then he was able to U-turn and go back towards the crosswalk to head towards the students and us at about 35 to 40 miles an hour,” said Reese.

The unidentified man proceeded to speed onto Embarcadero and cut off traffic. Many students took videos of the car speeding through campus, which were later turned into Principal Kimberly Diorio and the Palo Alto Police Department.

The police “reviewed surveillance video, and we were able to get a license plate number,” Diorio wrote in an email to staff. Diorio added that the police did not believe this incident was connected to the escape of two inmates earlier that morning from a courthouse in Palo Alto.

Just two days prior to this campus incident, five varsity football players heading home from film playbacks on Saturday, Nov. 4 encountered an oil spill on Alma that caused the car to hydroplane on the wet pavement. According to junior and varsity football player Damion Valencia, who was a passenger in the car, the oil caused the wheel to lock and the car to accelerate.

“We were making a left onto Alma off Churchill, and the car just started swerving by itself,” Valencia said. At first the driver  “got it into control, but then the front tire locked and the engine started making a really loud noise, and the car started spinning.”

Junior Seattle Hmelar, who was driving the car, recalls attempting to warn his passengers. “I looked back and I was trying to warn them and trying to tell them that the car wasn’t going to stop,” said Hmelar. “And I didn’t want to press the brake [because] then we would swerve even more.”

Hmelar tried to move himself away from the driver’s window when he realized the car was going to slam into a tree. He ended up smacking his head against the window, breaking the glass.

Junior Dwayne Trahan said he was thankful that the accident was not more severe. “If the tree wasn’t there we could’ve flipped over into a house,” Trahan said.

The students said that despite the shattered car window and impact of the crash, they did not initially believe that they were injured.

“Everybody was in shock so we really didn’t feel anything at first. But then everyone started feeling soreness in their bodies. [Seattle and I] both got checked up and we both got concussions.”

Both Hmelar and Valencia were not able to play at their first football playoff game against Wilcox on Thursday, Nov. 9. Trahan and the other two occupants, sophomore Jamir Shepard and sophomore Junacio Henley, were not injured.