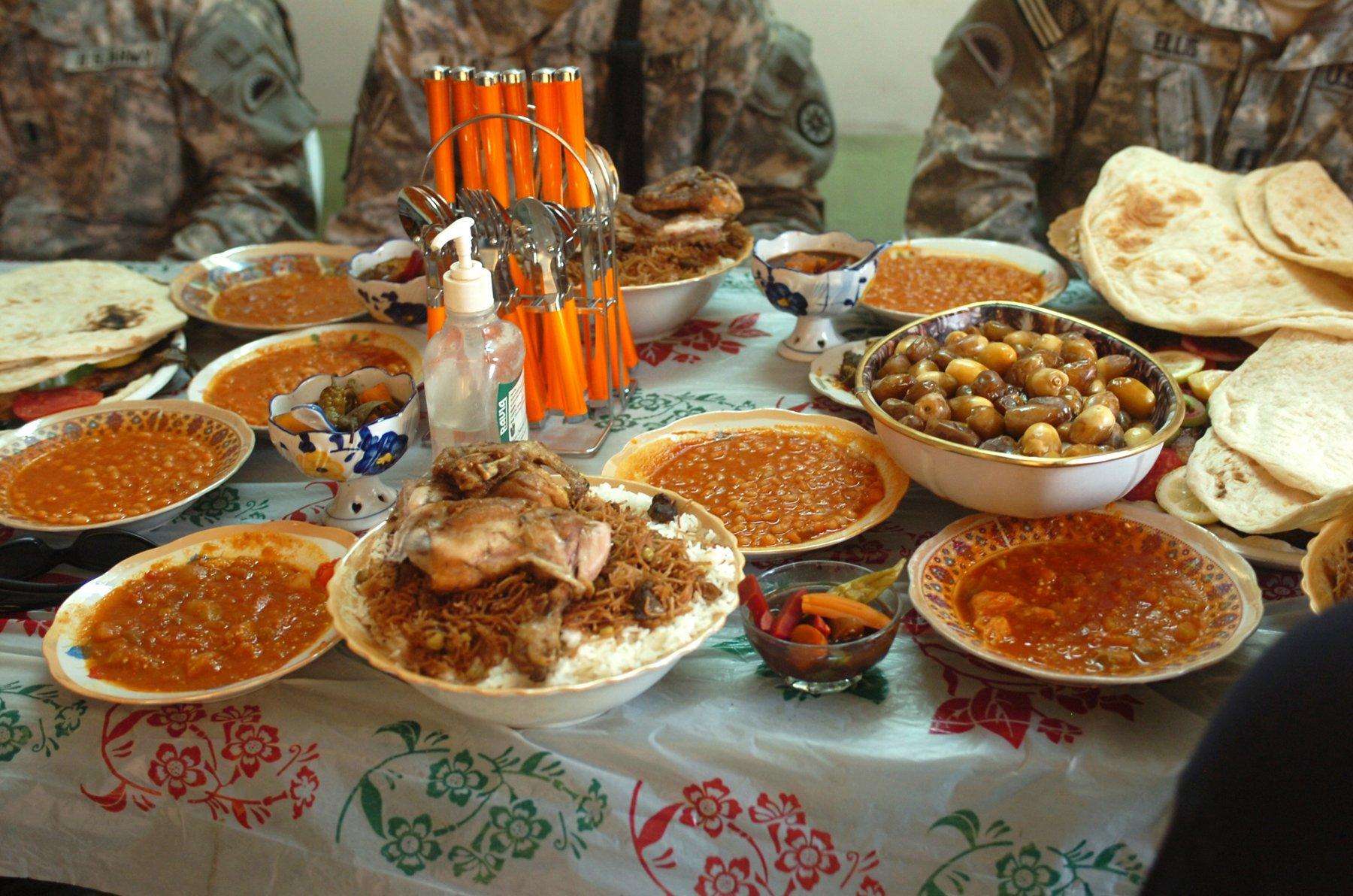 Mr. Ali Jadaan, a local contractor in Scania, Iraq, welcomes members of Alpha Company, 2-162 Infantry, Oregon Army National Guard, into his home for a pre-Ramadan feast. The feast was also an invitaion for the Alpha Company, 2-162 new command to sit and have a non-business meeting. The meal consisted of chicken and rice, soups, fresh fruits and vegetables, pickled vegetables and dates.

Most of the time, the word “diet” conjures up images of people eating salads or drinking green smoothies to be healthy or lose weight. However, there are many people who restrict the food they eat for a different reason: religion.

Paly junior Soumya Jhaveri practices a religion called Jainism. One of the central beliefs for Jainism is ahimsa, or nonviolence. Thus when Jains are choosing what to eat, they must consider all the living things that could have been harmed in producing the food.

“The goal [for Jains] is to minimize the amount of violence inflicted on other organisms as a result of food being harvested,” Jhaveri said in an email.

Every Jain has a different interpretation of this idea and follows it to different lengths.

“The thing about Jainism, like most religions, is you can decide how much you want to follow it. So there are people who eat root vegetables and there are also people [who] are even stricter than me with their diets and don’t eat out at all.”

All Jains practice vegetarianism. This is because according to Jain texts, all organism possess varying levels of senses. For example, bacteria, plants and vegetables are considered one-sense beings. Humans and most animals are five sense beings. It is against Jainism to intentionally harm higher than one sensed beings. Violence to the higher sensed beings, including the consumption of meat, attracts more negative karma.

Jhaveri is lacto-vegetarian, meaning that in addition to meat, fish and poultry, she does not eat eggs. She said that this is because of the symbolism. Eggs have the potential to become a chicken, a five-sense being, so to her, it seems wrong to eat them. Also, in order to produce eggs, chickens can be treated under harsh conditions.

She avoids other animals products, such as honey and gelatin, since five-sensed beings are harmed while harvesting them. However, dairy products are exceptions because they contain only one-sense bacteria. Since animal practices can be unethical for cows, Jhaveri tries to buy organic products.

Jhaveri says stricter Jains may not eat cheese because it often contains animal rennet. Some types of cheese are also fermented, meaning that it contains more bacteria than necessary to consume. Jains do not drink alcohol for the same reason and because it impairs cognitive ability.

Another unique part of Jain diet is that some do not eat root vegetables.

“I don’t eat any root vegetables because when you pull out the roots to eat a plant, like a potato, onion, or carrot, you kill the entire plant, versus when you eat something like a tomato, the entire plant continues to survive except for the one tomato that you are consuming,” Jhaveri said.

In addition to Jains’ regular diets, there are certain days based on the lunar calendar, including the Holy Week Paryushan, when they fast to practice self-restraint. Jhaveri’s family does not eat fruits, vegetables, yeast, cheese or butter during these days. Jhaveri said eating those foods is not ideal, but it would be impossible to get the proper nutrients without eating fruits and vegetables on a daily basis.

“It’s really not as restrictive as most people think it is. I can find something to eat at every restaurant, and it’s made me into a very flexible and adaptable person. And it’s not something I really talk to people about, but when I have, I’ve always found people to be accepting about it.”

One food that is haram is pork. Muslims also cannot eat any products that contain by products of pig meat or milk, including gelatin, pig enzymes, lard, and bacon.

“One of the main understandings religiously [why Muslims don’t eat pork] is that it almost parallels to cannibalism because a pig actually has the brain and cognitive understanding of a five-year-old child, so they know when stuff is happening to them,” said junior Noor Navaid. “They’re also not the cleanest animals. So anything that has a lifestyle that’s not entirely clean or can’t be controlled because it’s their natural lifestyle, like the pig, we can’t eat that kind of meat.”

Muslims also avoid meat from carnivorous animals since it is considered impure.

Intoxicants are also prohibited and observant Muslims also avoid sauces and foods that are contain or are prepared with alcohol.

“[Alcohol is not allowed] because it’s an intoxicant and it puts a strain on your ability to think, your cognitive abilities,” Navaid said. “There’s an emphasis on being able to control yourself and be able to be present all the time, and you can’t really do that with intoxicants and alcohol, especially. Some people might argue, ‘oh it’s fine if you don’t have it to the point where you’re intoxicated’, but if it’s something that’s been restricted on us, we try to avoid it.”

Some Muslims also choose to only eat meat that prepared in a specific way called zabihah.

According to Navid, the animal must be naturally raised in a free environment. Then when the animal is cut, it is turned upside down and cut across the jugular vein to cut the nerves so it does not feel pain. The animal must also be completely drained of blood. During this process, they must recite a dedication to God.

“When you cut the meat you have to say ‘this is is in the name of God’. We’re cutting this meat for God, it’s not just to satisfy our hunger because we know when we cut this meat it goes back to God, the creator.”

Although, Muslims are permitted to have meat, they try to limit the amount they consume.

“[Islam] was brought in a time where people would raise their livestock and then kill it. So the ideal method of having meat in Islam is you raise your animal, you become close with it and then it’s a hardship for you to have to cut the meat because we’re try to stay away from having too much meat.”

However, the Quran states if there is an instance of possible starvation and there is no other food, consuming haram food is non-sinful.

Any foods that are not haram are considered halal. This includes seafood and vegetables.

“There [are] no restrictions except for pork and alcohol, and some people might set their own boundaries, but that’s up to the individual person,” Navaid said.