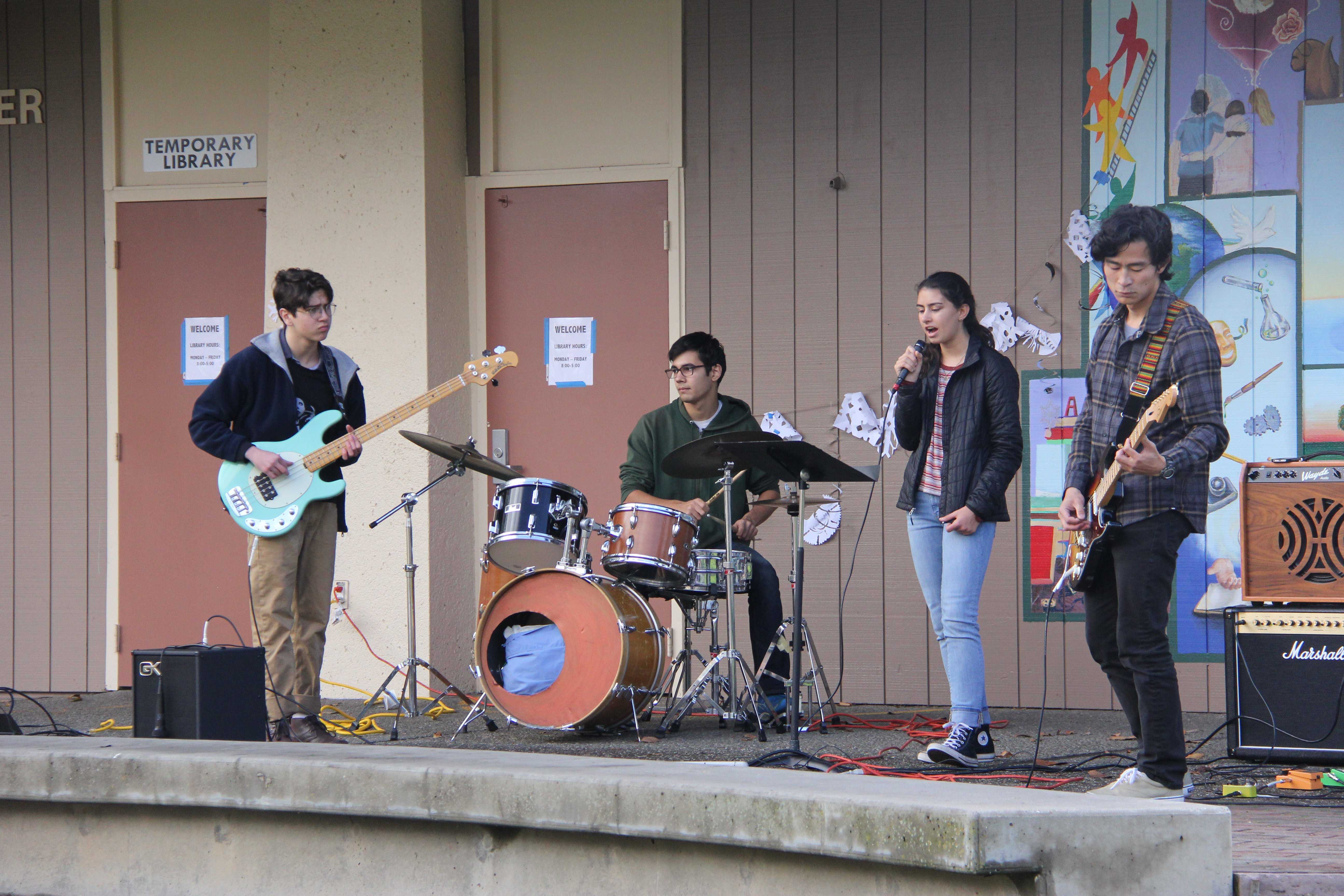 The first-ever Quadglobe was a smash success, with a lively student crowd and strong, talent-filled performances from some of Paly’s finest artists. Without further ado, here’s our review of each of the jam packed days.

Quadglobe kicked off with freshmen band Luke Mulani, consisting of Bryant Sid, David Snyder, Marina Buendia and Jasper Ahrends. Despite Quadglobe being the band’s first stage performance, it still managed to pull through with an impressive show sure to have pleased fans of the alternative genre. Needless to say, they lived up to the hype, and their performance caused the freshman class to unite like never before.

Ever since Oscar’s Band debuted at Quadchella last semester, the group has amassed a huge following. Declared by many as kings of the Paly music scene and the natural successor to Martin from Palo Alto, Oscar’s Band had high expectations going into their sophomore show at Quadglobe this year.

It’s most recent performance, while more abstract than other Quadglobe performances, pushed the definition of music to another level, including revolutionary concepts like the inclusion of food, comedy and  random audience participation. For example, Oscar invited three audience members to the stage and asked one to recite Trump’s inauguration speech, another to recite the lyrics to “Gucci Gang” by Lil Pump and the last to recite Martin Luther King Jr.’s famous “I have a dream” speech all at the same time. The chaos that ensued had the audience in tears.

For many fans, this year’s performance came out of left field. Most expected Oscar’s Band to break out their tried and true pots, spoons and didgeridoos. However, this year, they opted for a mix of stand-up comedy with planned chaos and interruption. The show can be compared to the likes of Eric Andre and other acts specializing in the art of the unexpected and strange.

Oscar’s Band was preceded by senior duo Lia Straight and Kelsey Lu, who performed a rendition of the song “Strangers” by Hasley. The two took the stage in full force and moved students into a hypnotic clap.

Day three of Quadglobe kicked off with a brief performance from the Paly K pop Club, who enchanted the quad with their choreography for popular Korean songs. It’s obvious the group prepared heavily, with each move flawlessly leading into the next.

The group was followed by seniors Ole Erickson, Niko Lillios and George Welch. The trio dressed in flannels, blue jeans and straw hats took to the stage to perform a passionate rendition of Rednex’s 1995 hit “Cotton Eyed Joe.” The short performance left the audience fiending for more covers from the group, and one can only hope to see them perform again in our lifetimes.

Indie fans were quick to give the band praise, citing the band’s ability to improvise on the guitar and expertly cover 1970s music.

“I loved the way that the guitarists were able to put a unique twist on classic music,” said senior Kasra Orumchian. “Personally, I am a big fan of older music and seeing my fellow classmates play the music I love was a great experience.”

Thursday featured only one act, the student band Romaine. The band gave listeners exposure to rock music in a style that contrasted the bands before it. Not quite as experimental as Oscar’s Band and not as indie as Miles’ Garage, Romaine’s ability to perform both covers and original works gave them a fun-yet-emotional learning experience.

For a band making its non-underground debut, the expectations were set quite high for student band Plastic Flowers. They did not disappoint, as the band, which consists of seniors Benner Mullin and Gabe Cohen, wowed listeners with song after song of rock music, even causing students to engage in a mosh pit at one point. Mullin excelled on the drums, while Cohen provided his vocal talents.