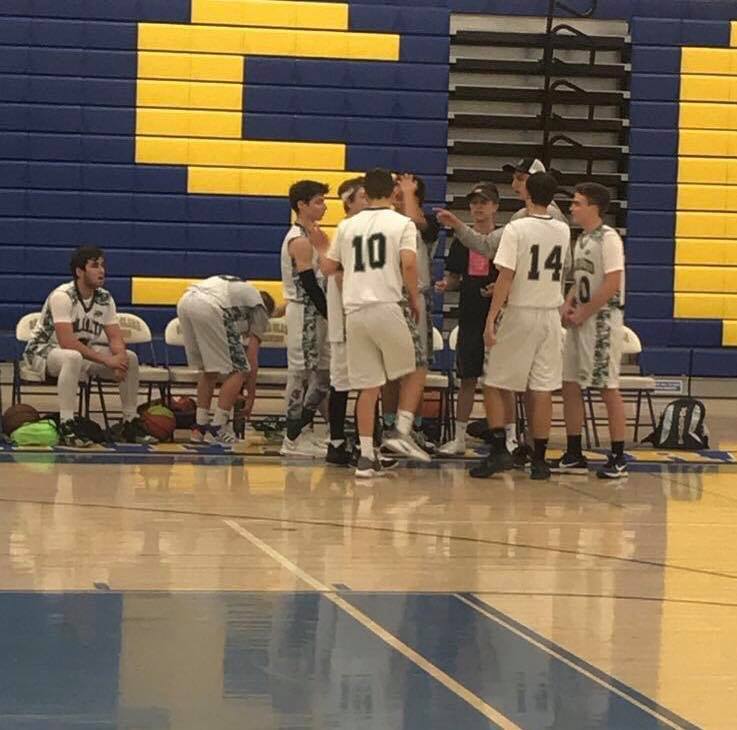 Junior Josh Kasevich dreamt of being a star in the National Basketball Association (NBA) from a young age, but due to his lack of talent he found a league with not as much fame, but the same level of intensity, National Junior Basketball (NJB) basketball.

“I learned very quickly that I was not NBA bound, but NJB offered me more clock and an opportunity to play with my friends,” Kasevich said.

The NJB league is a non-profit youth league with over 20,000 participants in six states. The league’s participants generally consist of elementary and middle schoolers, but over the past few years, an increasing number of high school students have chosen to play, including many students at Paly.

The league’s flexibility on commitment has attracted many students who want to focus on school or another sport, yet also hope to continue playing basketball. Additionally, some players just wanted to have fun with their friends, like many members of the Palo Alto Sky Hookers, who made their NJB debut this year.

“Most of us joined to play basketball with our friends and hopefully catch some dubs.”

Going into the season, the team was confident in its abilities to go undefeated, but their hopes were short lived as they lost their first game 64-30 to Willow Glen.

“We thought we could mess around and still blow out teams, but that proved to be untrue after our first game,” Strathern said.

As the season progressed, the Sky Hooker’s team started to fall apart. They were reported for disrespectful behavior to the league commissioner; their coach, junior Wes Walters, abandoned them mid-season because the team “was complete trash,” and the “Hooks” had to forfeit a game because the team captain, Strathern, didn’t message the players the team was playing, so nobody ever showed up.

The coachless Sky Hookers ended the season 1-8, dead last in the league. Their one win came from a tough-fought victory over Paly rival, the Palo Alto Pandas.

Unlike the Sky Hookers, members of the Pandas saw the NJB league as an opportunity to improve their basketball skills. For example, team coach and player senior Jeremy Dou, said participating in NJB made him an overall better player.

“The season offered me great opportunities to improve my basketball skills,” Dou said. “I feel that I am more confident taking shots when I am on the court than before.”

Unlike other teams in the league, the Pandas incorporated film review to analyze their gameplay and improve. This strategy didn’t pose any major beneficial effects as the Pandas finished the season 2-7, slightly above the one-win Sky Hookers.

“I must admit defeating Diversity is one of the Palo Alto Panda’s dreams,” Dou said.

But this dream was shattered when they lost to Diversity 66-34. However, Dou said he was satisfied with the team’s performance this season.

Palo Alto Diversity, the most successful Palo Alto NJB team, finished in second place with a record of 9-1.

“The whole season was a breeze,” said senior Benner Mullin. “It got kind of boring beating teams by 40.”

Diversity’s main goal was to win the high school division and head to Orange County, Calif. for NJB finals, according to Mullin.

“We knew we could get to the finals of the Silicon Valley section because of our talent,” Mullin said. “We just needed to beat Willow Glen to reach our goal and head to Orange County.”

The Willow Glen team hadn’t lost in three years and defeating them would be a difficult task. Diversity barely kept the game within a 30-point deficit,  and its goal of making it to Orange County disappeared.

“Despite a devastating loss in the finals, our team proved one thing,” Mullin said. “We are by far the best team at Paly.”

The fourth NJB team is the Palo Alto Senders. The Senders entered the league with high expectations for their team, since it was their second year. However, its main goal for the season separates them from other Palo Alto teams.

“NJB isn’t about social media, fame or recognition, it is about inspiring that young boy who sees the Palo Alto Senders and thinks maybe he can send it with the boys too.”

The Senders finished the regular season 6-3, which landed them fourth place. For its first tournament game the team faced powerhouse Willow Glen. In the fourth quarter, senior captain Ercan Gokcek decided to throw in the towel.

“Even though we were down by like 30, I knew we could make a comeback,” Gokcek said. “Willow Glen tried so hard to get here and their coach would lose it if they lost, so I decided to let them win.”

After a potential run at the title season cut short by a loss to Willow Glen, Heller said his team will return next year.

“We’re coming back for the ‘ship,” Heller said. “You can expect nothing less than a full send.”