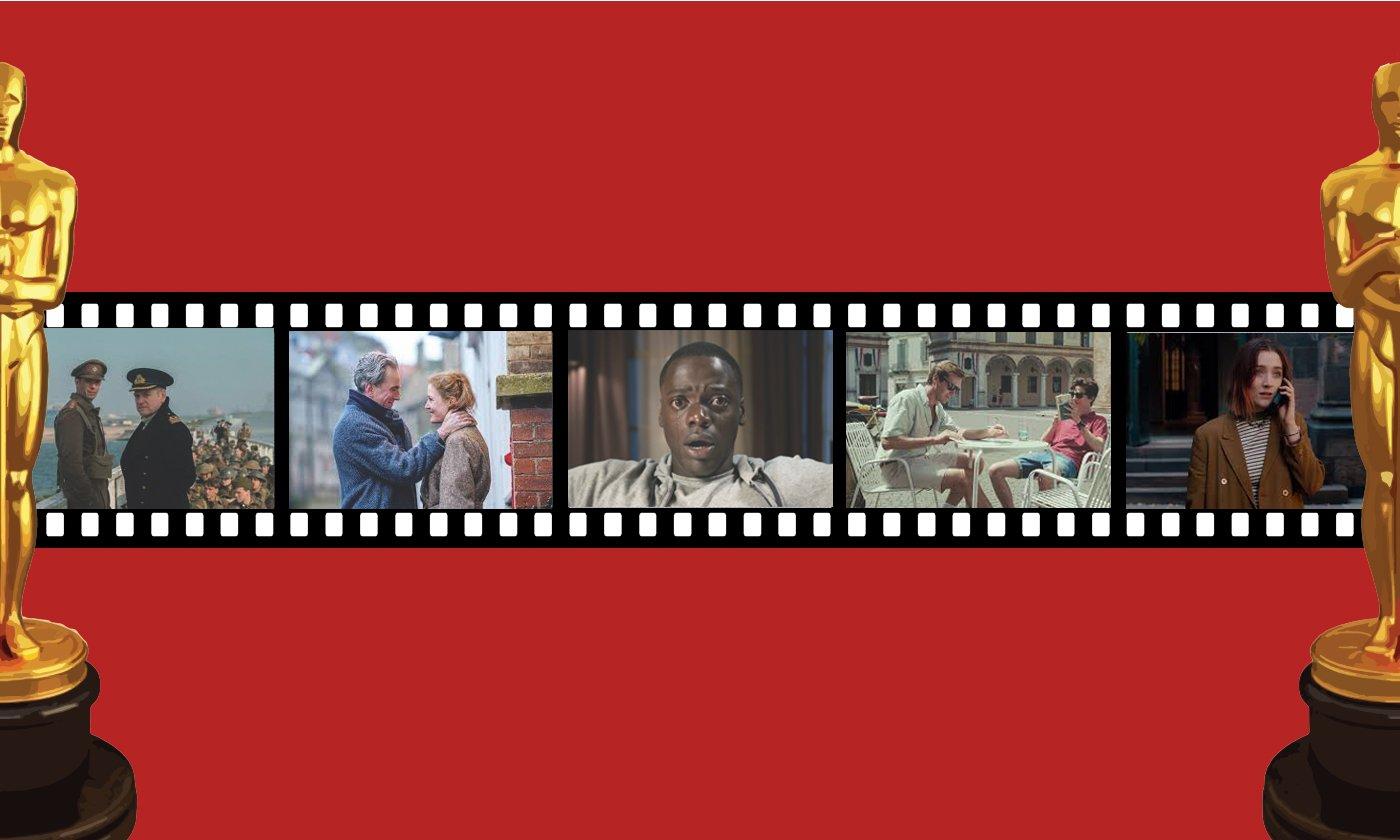 Directed and written by Greta Gerwig, “Lady Bird” has the viewer sitting shotgun with Christine “Lady Bird” McPherson (Saoirse Ronan), a strong-willed Sacramento high schooler who continually butts heads with her mother through the course of a turbulent senior year. The story lacks a traditional plot structure, replacing “rising action” and “climax” with several separate but important moments in Christine’s life that frame her relationship with her mother. The film treats life on the verge of adulthood with refreshingly respectful writing — Gerwig writes awkward and cringe-worthy scenes for her teenage leads without ever seeming condescending or out of touch.

As a character piece, Saoirse Ronan perfectly embodies the fierce conviction and bullheaded confidence that drives the heart of “Lady Bird.” Gerwig’s writing always frames Christine’s actions in a neutral manner, letting Ronan’s pure charisma speak for itself instead of holding the viewer’s hand and guiding them through the tangled web of problems the characters navigate. At the time of this writing, Ronan is widely considered to be leading the pack for Best Actress.

The Shape of Water

This awards season’s head-and-shoulders favorite, Guillermo Del Toro’s “Shape of Water” is a Beauty and the Beast-esque romance, centering around a mute janitor, Elisa, and the aquatic humanoid creature that inhabits the government facility where she works. Set against the backdrop of Cold War America, Elisa must contend with ruthless American government agents and Soviet spies in her efforts to save the creature from vivisection. Del Toro directs with incredible visual flair (there’s something colored sea-foam green in every shot), and Sally Hawkins as Elisa Esposito portrays a remarkable amount of personality and charm without a single line of dialogue.

As a Del Toro production, attention is firmly placed on special effects, specifically creature design. The fish-man is perfectly brought to life with skilled prosthetics, CGI only used to animate scales and eyes. Doug Jones brings the amphibian man to life and gives a distinctly human touch to the most inhuman of characters.

In a year full of morally ambiguous stories and moody character pieces, “Shape’”s optimism helps it stick out, which may be why it attracted more nominations than any other film in this season.

Paul Thomas Anderson’s “Phantom Thread” is the slow-building tale of a dressmaker, Reynolds Woodcock (Daniel Day-Lewis), in 1950s London. Woodcock lives his life by an strict set of rules, working in close tandem with his sister Cyril (Lesley Manville) until his life is overturned by the arrival of Alma (Vicky Krieps), a strong-willed young woman who serves as the inspiration for his work but refuses to submit to his eccentric lifestyle. “Phantom Thread” is a film driven by subletly, letting its lavish costumes and sets take center stage; if a scene centering around one character intentionally cooking asparagus incorrectly sounds boring, this film probably isn’t for you.

It is impossible to talk about “Phantom Thread” without mentioning Day-Lewis, whose work as an apprentice to Marc Happel, costume designer for the New York Ballet has allowed him to flesh the dressmaker out with incredible confidence and skill.

Despite its slow pace, the film is incredibly absorbing and allows the viewer intimate knowledge of a memorable cast of characters, creating an intensely moving film experience.

Darkest Hour,” directed by Joe Wright and starring Academy darling Gary Oldman, chronicles Winston Churchill’s turbulent first year as Prime Minister of the United Kingdom, as his own party tries to undermine him and German troops menace Britain. Oldman embodies the portly Prime Minister with such ease that he almost disappears into the character. In an awe-inspiring display of dedication, Oldman smoked nearly $20,000 worth of cigars for the film and experienced nicotine poisoning.

That being said, “Darkest Hour” is marred by inconsistency in every other aspect of its production. The first half features absolutely stunning shots, including an especially memorable bird’s eye view of a bombed-out France. About halfway through the runtime, the dark tone of the beginning is replaced by an almost sickly sweetness. A scene on the London Underground is so saccharine that it doesn’t even feel like it was made by the same director. Towards the end, it seems like every scene had to contain a dramatic monologue by Oldman. The inventiveness of the first half is bogged down by a second half that so blatantly panders to its Best Actor nomination that the film has becomes a shell of itself by the end.

One of the most financially successful Best Picture nominees, “Get Out” is the directorial debut of Jordan Peele, formerly one-half of sketch comedy duo Key and Peele. No stranger to racial satire, Peele’s debut is a biting social commentary which focuses with a keen eye on the ways society fetishizes black men. Using surprisingly effective horror and suspense techniques, Peele sets up a creepy mystery and executes the payoff with such skill that the dramatic reveal, a premise so ridiculous that it’s a wonder the movie doesn’t immediately lose all its fear-inspiring atmosphere, is still somehow horrifying.

Social commentary, especially when satirical, is very easy to mess up. Come on too strong and it seems preachy, but ease up and the message may be lost. Peele’s writing is impeccable, providing a biting and smart movie that holds a mirror in the faces of its audience without ever seeming contrived. The characters are smart, the dialogue is punchy and occasionally hilarious, and the villains are deliciously menacing.

For an original screenplay by a first-time director, “Get Out” surpasses any expectations that could have possibly held it back.

Dunkirk” is not a war movie, it is a survival movie. Characters don’t have emotional development, and they don’t go through elaborate personal redemption; the only emotions present are panic and fear. It’s a harrowing experience, claustrophobic despite being set on a beach so large the camera can’t capture it all.

Of all the movies on this list, “Dunkirk” is the only one that must be seen in theaters, without exception. Hundreds of thousands of British soldiers look like ants clustered on the beaches, and the massive warships are so large the camera can’t even contain them. The sound mixing continues to raise the stakes: every gunshot is deafeningly loud, bombers overhead drown out dialogue, and the tense soundtrack keeps every second of “Dunkirk” nail-bitingly intense.

Despite the optimal viewing experience being in theatres, “Dunkirk” is the kind of movie that every film enthusiast ought to see at least once. It is intense, fearful, but also profoundly hopeful. “Dunkirk” documents one of the most inexplicable miracles of WWII, and in doing so leaves its viewers optimistic to the very end.

Perhaps a little too on-the-nose given the politics surrounding U.S. journalism over the last two years, Steven Spielberg’s “The Post” is the story of the Washington Post’s editor and publisher, played by Tom Hanks and Meryl Streep respectively, as they work to publish the Pentagon Papers and expose the U.S. government’s activities in Vietnam. To his credit, Spielberg does an excellent job avoiding the preachy message this film could have delivered, opting for a more sincere, dramatic approach. It’s a dynamic movie, if uncomfortably similar to 2015’s “Spotlight.”

“The Post” features perhaps the most star-studded casts of any Best Picture nominee. Meryl Streep and Tom Hanks are icons of Hollywood, both showing off the talent they’re known for. Though “The Post” is far from the greatest performance either have given, they’re still more than believable as their characters, and work alongside Spielberg to create a perfectly enjoyable film.

Three Billboards Outside Ebbing, Missouri” is not a traditional film. With one of the most generic revenge story setups possible, “Three Billboards” quickly begins to subvert viewer expectations with every twist and turn. The advertising of “Three Billboards” was more than a little deceptive; there’s much more at work than simply “tough mother enacts revenge on crooked cops,” and it is made explicitly clear that this story is devoid of both heroes and villains. This is a story about flawed, angry people, and the disasters that occur when people don’t have a productive outlet for their rage.

“Three Billboards” sports one of the best ensemble casts of the year, with Frances McDormand’s grieving mother supported perfectly by Woody Harrelson and Sam Rockwell. Both Best Supporting Actor nominees play policemen caught up in the mess that McDormand’s grief creates. Though Harrelson’s older police chief is performed with heart, Rockwell is the clear star of the show. His portrayal of a violent policeman is the emotional heart of the movie, far more than McDormand’s cold-blooded mother.

Though flawed, “Three Billboards” is an incredibly original and quirky drama that somehow manages to be both bleak and charmingly funny at the same time.

Call Me By Your Name

Call Me By Your Name” is director Luca Guadagnino’s deeply empathetic tale of a forbidden summertime romance between Elio, an introverted musician, and Oliver, a confident, carefree college student, in a time where same-sex relationships were strictly taboo. This film isn’t for the faint of heart: Guadagnino doesn’t shy away from sex, and a particular scene involving a peach about halfway through the film is so sexual that it borders an NC-17 rating.

Despite its overt sexuality, “Call Me By Your Name” has a charming innocence to it. Timothee Chamalet, as the young Elio Perlman, paints a distinctly lovable yet flawed protagonist.

In a balancing act, Perlman and his counterpart Armie Hammer manage to portray sexual relationships without exploiting intimacy for shock value. In doing so, the leads work in tandem to create a romance so heartwarming that other love stories pale in comparison.