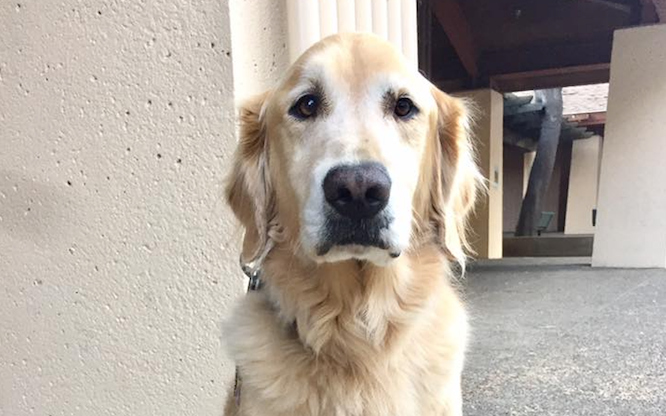 In the concrete jungle, new-age hunters prowl the busy streets between towering skyscrapers with iPhones held high in search of the treasured Dogspot. As valuable as Satao’s tusks, these images are proudly distributed, not on the black market, but rather the social media platform, Facebook.

Whether it be a photo of an elusive sunglasses-wearing canine or the rare stampede of hounds herded by a single human, Dogspotting is undoubtedly a lifestyle.

Around Palo Alto, a picturesque golden retriever by the name of Annie has become a local celebrity, identified by her signature black boots, large stick by her side and being typically atop a car or ledge of some sort. Belonging to senior Melissa Carleton’s family, almost 10-year-old Annie has gained a significant online following for her signature look and habits.

“One day when she was about seven, she just jumped up on the car. We thought ‘that’s so cute,’ so we trained her to keep doing it, and the boots give her the traction to help her balance on the car. It all just kind of works together.”

Much like birdwatching, traditional Dogspotting, which is solely the act of encountering a dog in public, does not grant any tangible rewards; however, as the popularity of the venture has catapulted on online platforms, Dogspotting participants can upload photos of their spot to share with thousands.

“I’m usually not very forward with asking people if I can pet their dog, but I like to admire from afar,” said dog lover and senior Alyssa Ibuyan. “The Facebook group allows me to do so more, because I can see dogs from all over the world.”

In the past year, a picture of Annie at Paly posted by senior Noga Hurwitz and a video of Annie sleeping atop a car garnered over 1,100 and 1,900 likes, respectively.

“People really love [Annie],” Carleton said. “She brings a lot of joy and she’s calming to people. Because they go to work and have really busy, stressful lives, when they see something really cute and furry, they just want to pet her and she brings people happiness.”

Paly students actively participate in the phenomenon of Dogspotting by liking or reacting to posts, commenting or posting Dogspots themselves.

“I look at the page once in a while for pictures,” Ibuyan said. “I post in the Facebook group occasionally, maybe once or twice a year, but only if the Dogspot is really special.”

A common form of interaction within the Facebook group is the habit of “tagging,” or notifying friends, in the comments of the post to share the image with others.

“My friend tagged me in a picture of a giant samoyed, [which looked] like a giant cloud,. He then sent me another pic of a tiny samoyed and it looked like a small cloud that had broken off of a big cloud. “

With over 800,000 members and growing, the Dogspotting Facebook group has garnered a name for itself and a reputation to uphold.

The administrators of the online page situate explicit rules detailing that it must be an “unexpected encounter with with random dogs” to accentuate the “spotting” aspect of the sport. Participants can easily follow the rule with a trick: if they know the name of the dog before asking the owner, the spot is invalidated.

The prestige of the group is enforced by admin deletion of posts featuring human faces or of known dogs. In addition, commenters can freely award bonus points for the dogspot post’s originality, rareness, less-limbedness or other factors.

While claiming they are “not a cult,” Dogspotting is spreading as the enterprise has released merchandise, an app and a more “laid back” sister Facebook page, Dogspotting Society.

Although Dogspots can be measured by likes, reactions and comments, the sentiment that is ultimately true to the art of dogspotting is simply the sense of community and enjoyment.

“Honestly, we didn’t expect [Annie] to get that many follows,” Carleton said. “We don’t do it for the attention. We do it to bring joy to other people and make other people smile, but it [attention] is just a byproduct of that.”