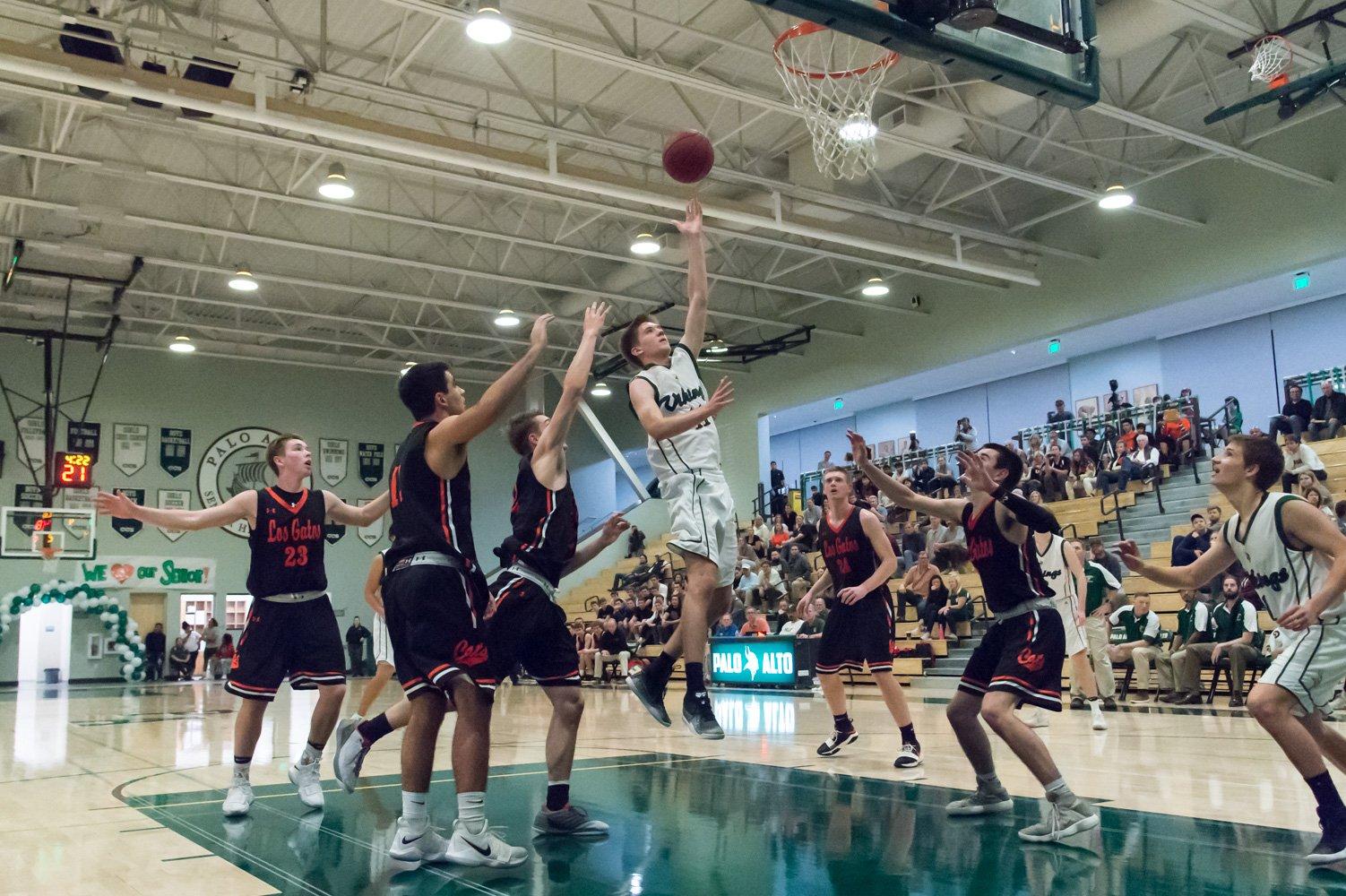 The Vikings had taken on St. Ignatius College Preparatory (16-8) on Friday, Feb. 23 for the open division quarterfinal game, and defeated them 75-60, becoming the first public school in history to advance past the first round of the Open Division.

The team then had limited time to prepare for the following game against Mitty, which took place on Tuesday, Feb. 27. Ranked 125 places higher than their opponent in the state, Paly was expected to dominate the Monarchs in this semifinal game.

In preparation for the game, the Vikings reviewed filmed footage of Mitty’s previous games, attempting to understand more about their playing style, according to senior forward Max Dorward.

“We know that they have a main [player] that scores most of their points. Their ball-handling isn’t that strong, so we’ll have to capitalize on that weakness.”

However, by focusing their attention on one strong player, they didn’t prioritize defending the other members of the team, according to senior shooting guard Jared Wulbrun.

“[Mitty] played really unselfish, which led to a lot of open shots for them,” Wulbrun said.

Senior center and forward William Schlemmer agreed with Wulbrun and noted qualities of Mitty’s team that made them difficult to stop.

“They shot really, really well,” Schlemmer said. “Anytime a team shoots over 60 percent from 3 [they’re] hard to stop. They also brought athleticism and physicality that we hadn’t previously played against in our league and I think we could have done a better job handling that.”

The final score of the game was 61-73, eliminating the Viking’s opportunity to advance to the CCS championship. Although the loss was tough, Schlemmer has a positive outlook on the game and for what’s to come.

“In a way, I’m happy that we lost that game. We had won 21 consecutive games and I think that we became fairly accustomed to winning easily, so I think that this will be a good wake up call going into NorCals.”

The basketball season is far from over, with NorCals approaching and a third place game against Saint Francis High School, for which the date hasn’t been confirmed yet.

Looking back on the season, the team had many impressive accomplishments.

Of their 14 league games, they defeated their opponents in every single match. The game against rival team Los Gatos High School in particular was a tremendous feat for the team, who were supported by the student spectators, cheering madly with each basket scored and stop made.

Paly was able to secure a sustainable lead in the third quarter of that game as senior Spencer Rojahn shot two consecutive three-pointers with success. The final score was 72-61, and marked a big win for the Vikings.