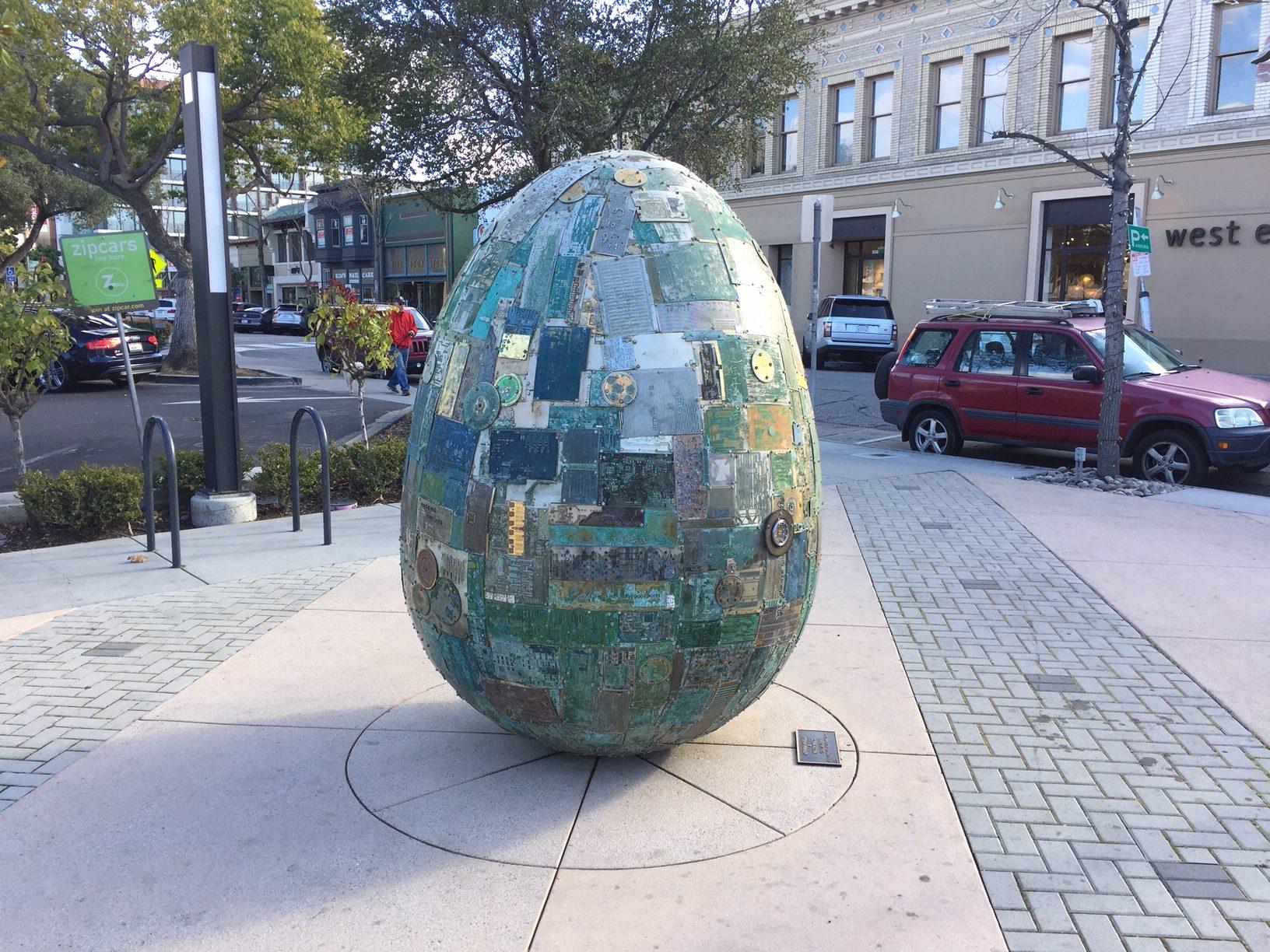 As 2018 begins, many new changes are on the horizon for Palo Alto, particularly on University Avenue. The city’s choices include the possible removal of a sculpture, the consideration of a car-free downtown and the addition of an East Coast  burger chain to the Bay Area.

The art installation in question is called “Digital DNA,” and it is located in Lytton Plaza on University Avenue in front of Pizza My Heart. The feature is most recognizable by its egg-like shape and the fact that it is made up entirely from scrap computer parts.

The city has asked the artist, Adriana Varella, to relocate the installation but has since postponed the date following several legal questions raised by Varella and her attorney.

“Digital DNA” was originally scheduled to be removed due to maintenance issues. According to the city’s deaccessioning report, the installation has cost the city $20,752 in repairs since 2005. The sculpture is also in a state of disrepair, according to the report, and could pose a potential hazard to pedestrians.

In an effort to preserve her artwork, Varella has cited the Visual Artists Rights Act (VARA), a city-wide policy which forbids the intentional removal or negligence of “works of recognized stature.” A letter directed to the city councilman by Varellas’ attorney states that “if the city of Palo Alto does not agree to keep the sculpture in place, as well as to perform routine maintenance on the work, Varella will consider filing a lawsuit.”

Palo Alto City Council is mulling over a proposal to make University Avenue more pedestrian-friendly. The City Council voted to add the program to the City’s list of potential ideas for 2018 back in October 2017 but has not initiated anything yet.

“We have not been tasked to conduct a study at this point,” wrote Director of Planning and Community Environment Hillary Gitelman in an email to The Stanford Daily. “If we are asked to do so, I’m sure it will involve extensive community engagement and we would welcome [the Stanford community’s] participation.”

The project idea was modeled after the Third Street Promenade in Santa Monica, Los Angeles,  which is a successful outdoor pedestrian mall built in 1989 with the intent to liven up the city.

“I think it would be a good idea to make University Avenue car free. If they decided to go ahead with the project, they could use the new space for better things.”

Although the proposal has many upsides, an increase in traffic and lack of parking could pose major problems. A lack of available parking on University Avenue may result in an overflow of cars into residential neighborhoods.

“If you look at what happened in Santa Monica, it took lots and lots of debate for [the pedestrian mall] to finally happen, but I think most would agree that it was a very positive change for the city, and people are glad that they did it,” said Greg Tanaka, a Palo Alto City Council member, in an interview with The Stanford Daily.

The idea is still in early stages and will require lots of input before a decision is made on whether the project is feasible and welcomed by the greater community.

Shake Shack, a restaurant founded by Daniel Meyer in 2004 best known for its burgers and milkshakes, is opening its first-ever Bay Area location in the Stanford Mall, replacing Wells Fargo. This location is one of the three Shake Shacks planned for the Bay Area. The other locations are planned for Marin and San Francisco. The Palo Alto location is planned to open in all of this year, with the San Francisco location following in early 2019.

The Shake Shack in Palo Alto is likely to face competition from local favorites like Gott’s Roadside, Five Guys, Kirk’s and the West Coast classic In and Out, but it will be one of the only restaurants specializing in burgers in the Stanford Mall.