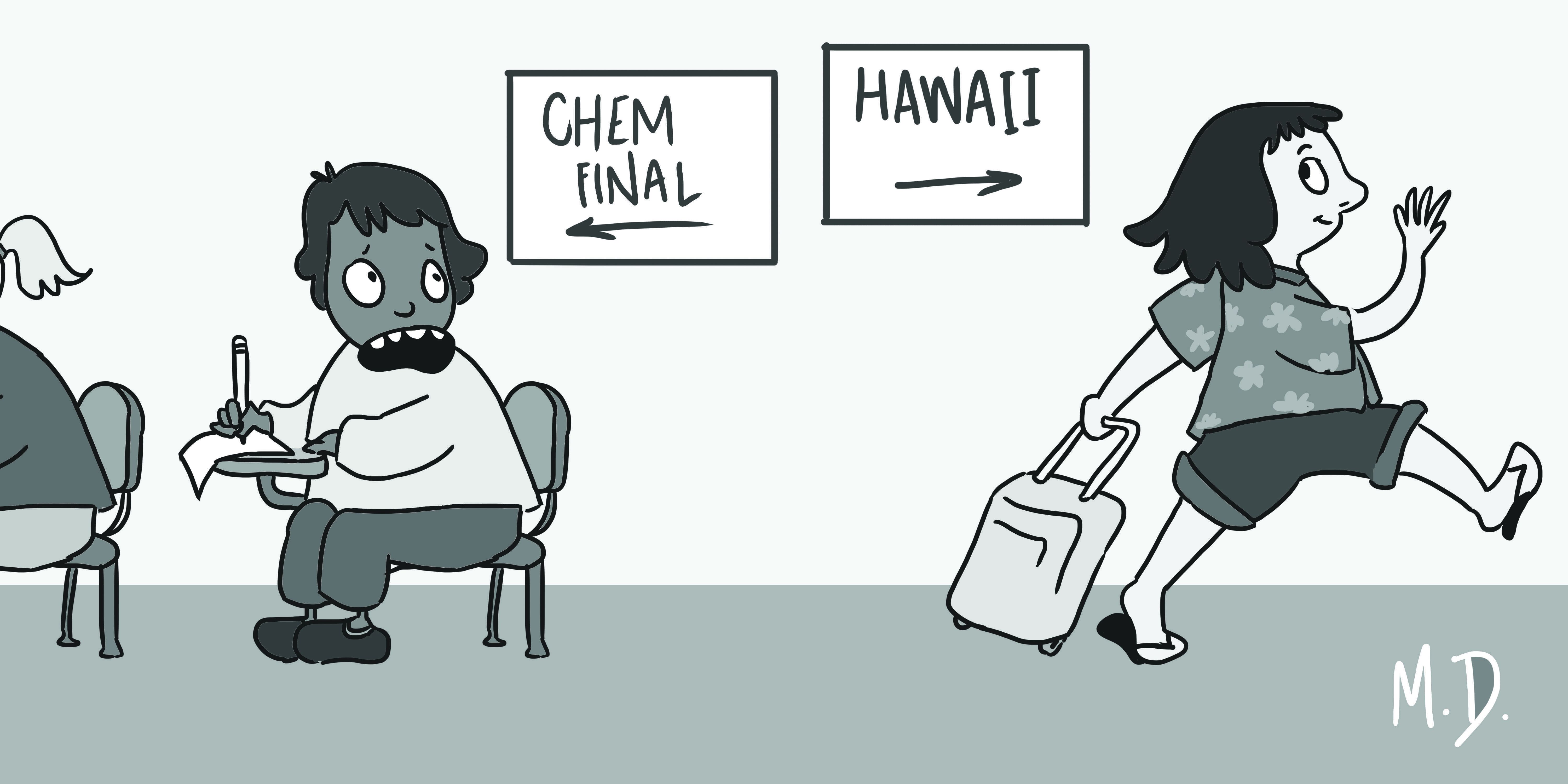 Students with A’s should be exempt from finals

Many students have experienced the anguish of having an A minus the week before the final. However, if the purpose of a final is to determine whether one has understood the course, students with A minuses or higher as an overall semester grade have already demonstrated comprehension and the ability to apply the concepts taught. People who have earned an A minus should not have to take the final because it is an unnecessary stressor.

“I have already worked hard in order to understand the material. So, why should I have to study what I learned throughout an entire semester for multiple classes just for my grade to possibly fall a letter down?”

Usually accounting for 15 percent or more of the total grade, one final has the ability to lower a grade by a full letter. Students who have shown consistent effort and understanding should not have to take part in that risk. There should not be a possibility of unsteadiness in an A grade; diligence should be rewarded.

“After a whole semester, I really just want to ease out of school life instead of going through a last ditch effort to force information I learned at the very beginning of the year into my brain,” said sophomore Sarah O’Riordan.

The majority of students, including those who have an A minus or higher in a class, have already been stressing for the entire semester. Therefore, those with an A minus should be able to catch a break as they have continuously shown, from beginning to end of the semester, that they are dedicated to learning the course material.

In Josep Vericat’s Spanish 3 class, those who have earned an A minus or higher before the date of the final are exempt from taking it.

“The final never tells me anything I didn’t know about the student already because they have been tested on the material before,” Vericat said. “And those with A’s have already proven themselves.”

During finals week, students should focus on finals for classes in which their grade needs to be pulled up. Having to review the entire semester’s course load for multiple classes is difficult, brings unnecessary pressure to the already stressful student environment and forces students to make the decision for which class to focus spending valuable studying time.

On the other hand, those with a borderline grade, or a grade  overall less than an A minus, should be given the chance to prove that they have what it takes to comprehend the material given through the course of one semester in order to raise their grade to an A minus or a higher grade in general (for example from a B minus to a B).

Furthermore, those with a failing grade have not shown any particular investment in the course, so it should not matter if they take the final as it won’t affect a failing grade regardless.

Additionally, students enrolled in AP courses should be focused on passing the AP exam rather than studying for finals, as an AP exam is more important than a final because it determines whether a student can receive college credit for the course in the future.

Moreover, those taking AP courses, usually juniors, are also most likely preparing for standardized tests like the ACT or SAT.

AP exams and standardized tests are top priority and students should be able to opt out of a final if proven understanding of the semester’s material by receiving an A minus or higher.

This would also be effective to implement as it would give teachers incentive to improve their ability to teach and prepare their students, as they would have to grade fewer tests.

Although it’s argued that finals should be applied because learning and then relearning material through studying is the best way to ensure retention, students have already gone through the learning and relearning process by absorbing the material when first introduced, then by completing the assigned homework and finally by rigorously studying for unit tests which are usually cumulative.

This leaves finals without a purpose for those who show comprehension.