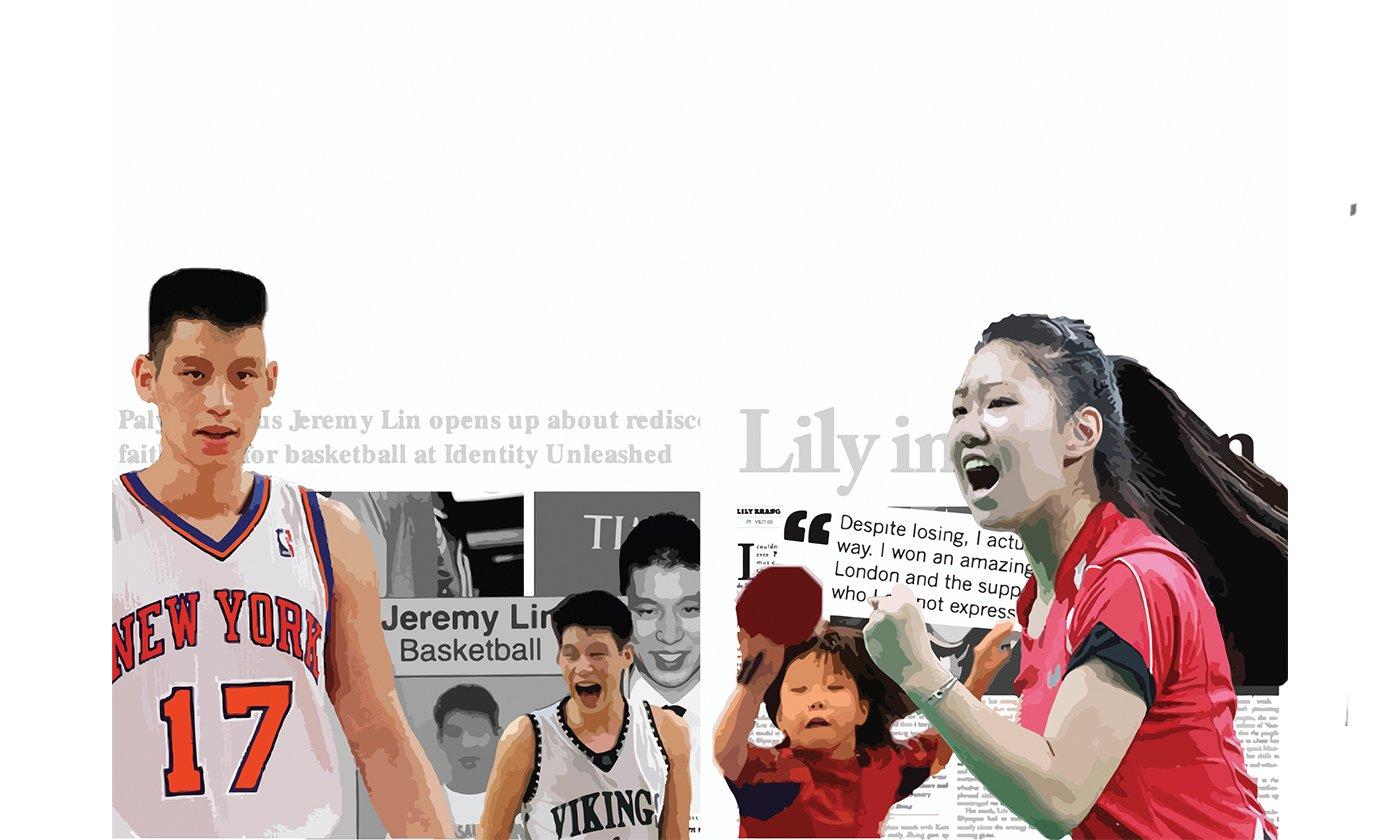 From Production to the Pros: Former Campanile staff members Jeremy Lin and Lily Zhang rise to stardom in athletics

Leyton Ho and Ujwal Srivastava
Centennial Issue
March 21, 2018
One on One with Jeremy Lin

In addition to leading the boys basketball team to a state championship, Lin was a staff writer for The Campanile from 2004-06.

“My time on Campy was really positive, it was amazing being around so many bright minds,” Lin said in an email to The Campanile. “I remember writing articles for the newspaper, but I always knew I was surrounded by more talented writers so it pushed me to try to be better. Typical days were pretty chill and standard unless it was production week, which would mean I’d be there until nighttime all week working on the story and paper release.”

One of the biggest takeaways for Lin from his time on the publication was respect for the media. Having experienced the effort it takes to produce a paper firsthand, he strives to help professional reporters at press conferences as a pro athlete.

“[The Campanile] has always given me a big appreciation for journalism, which I try to remember everyday when I’m doing interviews or PR-related obligations. I try to be empathetic towards the media regardless of my mood or if I played terribly because they have a job to do as well.”

Overall, Lin feels that high school was a crucial time for him and shaped him into the person he is today.

“It was a huge experience for me because it taught me the importance of hard work and dedication,” Lin said. “Looking back, I would enjoy each day more and stress less about my GPA, SAT scores and tests. I wouldn’t work less hard, I’d just stress less.”

In his junior year, Lin also took Advanced Placement (AP) U.S. History with John Bungarden. Bungarden enjoyed having Lin in class and has followed his career through Paly, Harvard University and the National Basketball Association (NBA).

“In my memory, Jeremy was a typical Paly student. He was bright, he was hardworking, and he was quiet in class. He didn’t volunteer a lot. He had to be called on to hear his voice. My clearest recollection has nothing to do with him as a student but as him as a basketball player when he came into class the day of NorCals. He was limping, and he said he was leaving the period early to go to the doctor. He said something along the lines of that he had ‘hurt his foot the night before and it’d probably be ok.’ Of course it turned out not to be, as junior year he was injured and didn’t play. He was just a good guy. It’s high praise for me to describe him as a typical Paly student.”

“We were doing some school visits with my son and that’s when he had the couple of magic games and he was suddenly on everyone’s radar,” Bungarden said. “Part of the deal for a while was, ‘We are from Palo Alto, where Jeremy Lin came from.’ He’s been interesting to watch, and it’s been interesting to watch his career from a distance. To play professional sports in any sport is a remarkable achievement and in the NBA it’s really impressive, and he’s had a nice career. I didn’t quite get all the hair things that he was doing, but I’m not sure many people did. It was an interesting flair of personality.”

“He was an extremely competitive and dedicated guy, a very confident player. You knew that you at least had a chance in whatever game you were playing in with him. He was a hard guy to coach because he lived for the competition but didn’t love doing the basic drills we would work on daily. It was always a challenge to try to get him motivated to work in practice.”

Along with playing basketball, Lin was involved in many other activities as a high schooler.

“He was extremely organized,” Diepenbrock said. “He played badminton, did the newspaper, he was an excellent student and took AP courses; he was also taking Chinese classes outside of school, and he was heavily involved in his Christian church. He was very disciplined in his schedule.”

According to Diepenbrock, Lin’s path to the NBA was unconventional and unexpected. Contrary to popular belief, Lin was not dominant in high school and refined his game later in his career.

“It has been very rewarding seeing a former player play in the NBA and have success,” Diepenbrock said. “He was a very good high school player, but normally people that make it into the NBA dominate much more than he did at the high school level. He had very moderate high school statistics given that he is an NBA player. His story is much more about his work ethic after leaving high school and doing what he needed to do to have success in college and the NBA. There were a lot of very good college coaches that saw him play quite a bit and just decided that he was just not good enough to play at their level.”

That being said, after winning the Division II State championship, Lin went on to play basketball at Harvard University and in the NBA with the Golden State Warriors and the New York Knicks, among other teams.

Through the Lens of a Photographer

Professional sports photographer Kyle Terada, a photo editor of USA Today, was part of The Campanile in 2004. He frequently took photos of Lin at Paly basketball games.

“[Lin] did well with academics and was well-liked by his peers and friends. He was a good basketball player, great teammate, great leader and respectful.”

As a photographer of Golden State Warriors games, Terada has interacted with Lin in the NBA.

“Being able to see him from high school to playing at Harvard and going onto the NBA has been a joy,”  Terada said. “When he visits he is always friendly and humble to anyone who approaches him.”

Back and Forth with Lily Zhang

Lily Zhang, a staff writer on The Campanile for two years (from fall 2012 to spring 2014), has an impressive table tennis resume, having made the U.S. Olympic Team in the past two summer Olympics.

Zhang picked up table tennis at age 7, when a friend took her to the Palo Alto Table Tennis Club, and hasn’t stopped since.

Currently a student at the University of California, Berkeley, Zhang reflected on her time on The Campanile and its effect on her table tennis career.

“I had a fantastic experience being on Campy. The friends I made, the skills I developed and the lessons I learned will stay with me forever.”

According to Zhang, these lessons did not come at the expense of her table tennis career, as she was able to balance table tennis with her newspaper commitments.

“I remember Campy was super accommodating to my training and competition schedule,” Zhang said. “Whenever I needed to travel for a certain competition, Woj and the rest of the staff would be supportive and encouraging and try to help me make up any work I missed.”

According to Zhang, while her parents largely planned her schedule in high school, she has developed techniques in college allowing her to continue playing ping pong and keep up with the demands of being a college student.

One of these techniques is using a planner.

“I recently picked up a planner and I definitely feel like it’s helped a lot,” Zhang said in an interview for Team USA. “Before I never gave much attention to it; I thought I could handle it all in my head. But after a while I realized it’s pretty overwhelming to keep it all in so it’s a lot more helpful to write it down and see it on paper.”

Jake van Zyll, a current junior at Chapman University, wrote for The Campanile at the same time as Lily Zhang. He reflected on his interactions with Zhang in an email.

“I got to know Lily a little bit while we were both writing for Campy. She is incredibly nice and always had a smile on her face in class. I remember thinking that she had particularly well-thought-out questions for the amazing guest speakers that would frequent our class.”

Van Zyll actually didn’t initially realize Zhang was an Olympian, and believed that Zhang’s personality endeared her to her classmates more than her Olympic pedigree.

“I actually didn’t find out that she’s an Olympian until a few weeks after I’d been in class with her, and by then I just thought that she was nice and seemed normal so it didn’t really shape my perspective of her,” van Zyll said. “Everyone was really nice to her, but that probably had more to do with how she treated other people than her Olympic status.”

Along with providing support, The Campanile also provided many positive experiences for Zhang.

Zhang said that she enjoyed production, the three-day process of turning stories into a coherent newspaper and valued the freedom that came with being a student journalist.

“I genuinely enjoyed production,” Zhang said. “Having a student run production was especially refreshing; we had so much creative freedom and opportunities to express our own opinions and ideas. Additionally, I learned many useful digital development skills, such as InDesign and Photoshop.”

While Zhang wrote many different pieces for The Campanile, she appreciated the opportunity to write for the lifestyle section the most.

“My favorite section to write for was probably the Lifestyle section. I especially loved being able to eat at new restaurants or try out new activities and then get the chance to write about my opinions or experience.”

The support and positive experience Zhang received from The Campanile staff was also present within the greater Paly community. In general, Zhang felt Paly was instrumental in helping her balance school and table tennis.

“Paly in general was such an important support system in my life,” Zhang said. “The administration, teachers and my peers there provided me with all the help and resources I needed to train, travel to competitions, and still pursue the classes and learning material I wanted. There is not a doubt in mind that I would not be where I am today without this incredible school and I am eternally grateful for Paly’s full support in encouraging me to follow my dreams.”

While at Paly, Zhang took AP Biology with Erik Olah.

“She was a good student. She missed this class quite a bit for tournaments but she always let me know ahead of time of what she was missing and she would always come back and stay on top of stuff.”

Olah adds that Zhang was pleasant to be around and a great team player.

“She was a good student all around, took care of things, had friends, worked well with others on labs,” Olah said.

Watching Zhang achieve success at the national level has been a rewarding experience for Olah.

“It’s been really cool [watching her],” Olah said. “I never watched table tennis in my life but following her and tracking  her has been pretty cool.”

At the end of the day, Zhang is still a college student, but nothing can undermine her vast achievements at such a young age.