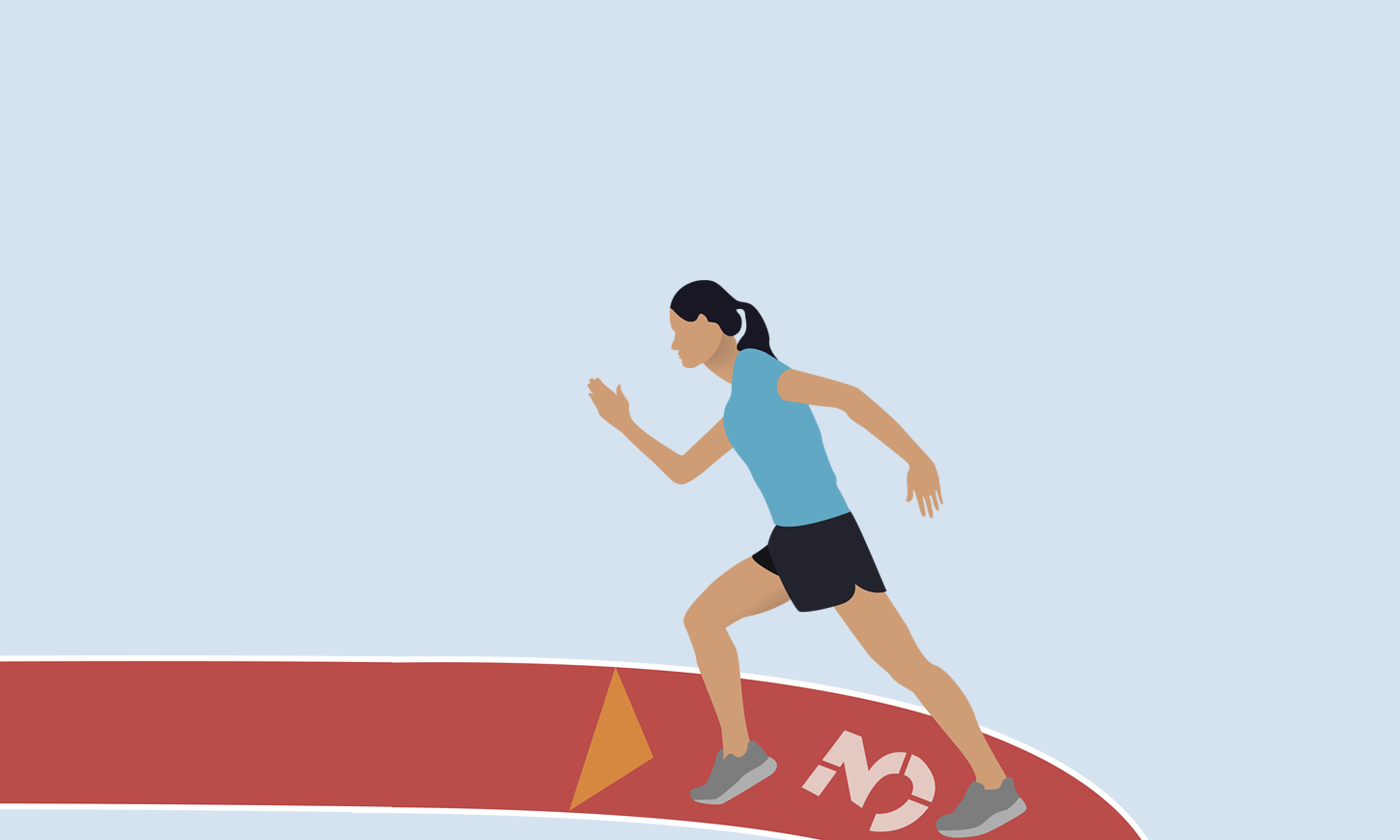 Comeback Season: How Student Athletes Navigate the Turmoils of Injury

It takes a split second to change a life. A stuck cleat. An uneven patch of grass. A sweaty blotch of hardwood floor. An unexpected tackle. All seemingly innocuous sporting moments. Yet, for an unlucky few, these events aren’t just a small occurrence in the normal flow of a sports match. Instead, they are painful portals into a world of struggle, doubt and suffering.

For many, injuries are an inevitable byproduct of playing sports. Anyone who has watched professional sporting events such as the Super Bowl, World Series or NBA Finals has likely seen an athlete go down. Serious injuries in professional sports have become common enough that sports fans and sports media have trivialized the rehabilitation process. According to NFL Hall of Famer, former 49ers quarterback Steve Young, who led the 49ers to a Super Bowl victory during the 1994 season, the occasional recklessness of professional athletes can negatively influence their young fans.

“Youth athletes trying to imitate the pros can be dangerous because pros don’t necessarily play with the safest techniques,” Young said.

Additionally, professional athletes generally rehab quickly, play through injuries and according to Young, approach injuries like another challenge to conquer.

“Mental toughness is a hallmark of the elite athlete so coming back from injury is just another challenge or roadblock to be overcome just like you have your whole life.”

The mentality of professional athletes, however, does not paint the full picture of the injury rehab process for youth and recreational athletes.

In reality, the healing process is extremely strenuous and is complicated by mental struggles, peer pressure and stigma.

Senior Matan Ziv has struggled with serious injuries throughout his soccer career. Ziv has undergone surgery on his ankle twice, the first time to repair a torn ligament in his foot and the second to repair a fractured tibia. In total, Ziv has spent almost a year and a half of his time at Paly rehabbing from the two injuries. Despite these obstacles, Ziv continues to play soccer, albeit with a more conservative approach to the game.

“The only way to fix my ankle for good is another surgery, but I would have to quit soccer and I’m not willing to do that,” Ziv said. “For now I’m playing through the pain, icing heavily after games and hoping I don’t get into any huge tackles during the game that will create a significant break to my ankle.”

Junior Nathan Ramrakhiani, who has played soccer for most of his life like Ziv, also faced a bleak diagnosis but elected to stop playing instead of having surgery.

“I’ve been injured more times than I can count,” Ramrakhiani said. “My two most significant injuries have been a quadricep tear and a labral tear. I had to also quit soccer as this injury would not heal by itself.”

Junior Rachel Loewy took a different path. After two surgeries and many dislocated knees, her surgeon forbid her from playing soccer again. Instead of giving up her active lifestyle, Loewy pivoted towards running track and cross country and has not looked back.

“Through soccer and my injuries, I was able to try out cross country and fell in love with it. In fact, I enjoy cross country more than I enjoyed soccer.”

Facing long hours at physical therapy and a grueling journey towards regaining fitness, Ziv, Ramrakhiani and Loewy struggled both physically and emotionally to cope with their injuries.

For many young athletes, the mental toll an injury can have on an athlete can be more debilitating that the physical pain. It can seem insurmountable at times. Injured athletes are sidelined for an extended period of time and have to brave the setbacks and obstacles that come with the process of rehabilitation. Often, this struggle places a massive mental burden on the athlete, resulting in a loss of confidence and fueling negative emotions.

“I felt that the mental struggle was ten times as significant as the physical struggle, mainly because I could see all the hard work I put into my sport slowly being lost as everyone around me got better, while my ability stagnated,” Ramrakhiani said. “I lost a lot of motivation and self-confidence as a result.”

“The mental strain is a huge ordeal. After a certain time, most injuries become 90 percent mental, 10 percent physical. Your mind itself has to prepare and engage and ask itself ‘Am I able to do this?’ ‘Can I compete again?’ ‘Do I want to put myself in that position again?’ It’s more of a mental argument that each individual athlete has.”

With the prevalence of injuries in high school — the National Athletic Trainers’ Association reports that 90% of student-athletes report some sort of sports-related injury — many Paly coaches have firsthand experience witnessing their athletes struggle through the mental barrier of an injury. Jonathan Kessler, the Paly wrestling coach, is one such person.

“Depending on how severe the injury is, it can be extremely detrimental to an athlete’s daily life,” Kessler said. “It’s always tough to have to sit out of competitions due to injury. Wrestling is mainly an individual sport and we train so hard to reach our goals. The thought of not being able to accomplish what you set out for is extremely tough mentally to grasp.”

For athletes who sustain multiple serious injuries, the mental strain caused by subsequent injuries is even greater.

“The second injury broke me. I remember sitting in the room after the doctor told me [my tibia] was broken and I didn’t believe it. I kept repeating out loud ‘Why me?’ ‘Why again?’ That’s all I could think about for so long, what did I do to deserve this again.”

After overcoming the initial shock and despair of the injury, Ziv found that he simply was not the same athlete he was before the injury.

“After many long months of feeling like I lost who I was, it was finally time to start physical therapy which I thought would help me again like it did the last time,” Ziv said. “But this injury just didn’t get better. I worked so hard to get back to my physical shape, but my ankle always hurt, it never got better. It was really frustrating knowing there’s nothing else I could be doing. My bone just isn’t healing because of how bad the injury was. I would still go to almost all of my club team’s games and parents would tell me how they miss seeing me out there. I never learned how to respond to that because there’s nothing I wanted more than to be out there.”

Furthermore, athletes cannot just leave their injuries on the field. They take this mental strain and struggle to every aspect of their life.

“It’s not like you can leave the injury at school or on the field,” Arakaki said. “You take it home, it affects your family, it affects your own personal lifestyle, which is a really difficult part of it. Not only are we trying to get the athletes back into the game, but we are also looking at the fact that they have a social life, family life and education. [Rehabilitation] is a fine balance between those aspects.”

Along with affecting their social life, family life and education, injuries also challenge one’s sense of identity. Having played a sport for a significant portion of their life, injured athletes are often left searching for direction.

“Soccer was something that my dad instilled in me from such a young age. I started watching and playing soccer before I was 2 years old. Up until my first injury I always saw myself as a soccer player and to me it was the biggest factor in my identity. When I got injured for the first time and couldn’t play there was a few weeks where I felt like I didn’t know who I was and like I didn’t know what to do with myself.”

Another factor that makes recovery difficult is the stigma behind injuries. Sometimes, as in Ramrakhiani’s case, injuries can be misinterpreted as weakness, leading to a lack of support necessary for rehabilitation.

“I found that while my Paly coach was very understanding, my club coach was not. I felt that he was pressuring me to return long before I was physically able to, and I think this had an adverse effect on my recovery. The hardest part about my experience was my teammates’ behavior: I was called ‘weak’ and effectively emasculated for trying to let myself fully heal before returning to soccer. I was repeatedly told to ‘man up’ and ‘just play through it,’ a toxic attitude that ultimately hampered my recovery.”

“A lot of high school athletes are victims of their parents or their coaches or other players pushing them saying ‘We need you so badly, you have to play. That can be a big mistake. Sometimes I have to shut down parents or coaches that are pushing them too hard and protect the kids from the outside sources that are driving them further down the injury track.”

Love of the Game

Some say hindsight is 20/20. Reflecting on their sports careers, Ziv, Ramrakhiani and Loewy look fondly upon their experience playing soccer, even with their respective injury struggles.

“I never regretted playing soccer. I’ve always been an extremely physical player and if I could go back I wouldn’t even change that. I feel like I’ve always played the game the way I think is right and I would never change that. I love the game, there’s absolutely no way I would give up all I’ve learned from it, even with my injuries.”

Ramrakhiani echoed Ziv’s sentiments and also believes that his participation in the sport taught him key values that he carries with him in the present day.

“I do not regret playing soccer as it laid the foundation for work ethic, teamwork, and athleticism, key virtues that still guide my life today,” Ramrakhiani said.

Some athlete’s love of the sport is so great that despite adversity, they continue to take an active role on their team. Senior wrestler Jackson Clough sustained a severe season ending injury in the preseason that required surgery, but continued to help others on the team and to attend practice.

“Rather than isolating himself from the sport because of the thought of his wrestling career being taken away, he gave back to the community and helped the program,” Kessler said. “[Clough] trained our brand new wrestlers in the preseason, refereed wrestle-offs, ran the scoreboard during home duals, helped coach at JV tournaments and didn’t miss a practice all season.”

For all athletes, whether a professional at that top of their game or a high schooler playing their first varsity season, a strong support network of professionals — including physical therapists, trainers, doctors and surgeons — is beneficial for a successful recovery. These professionals provide athletes with valuable insight on their rehab process and educate athletes on keeping themselves safe in the future.

“Most athletic trainers not only try to fix the current symptoms but also try to educated each athlete about their injuries — why it happened and how it can be prevented in the future,” Arakaki said.

According to King, he stresses patience and trust in one’s body in allowing the athlete to return safely to their sport.

“The most important thing is listening to your body. Don’t listen to your coaches, don’t listen to your ego. If you are really having pain in a joint, then that needs to be addressed quickly and rapidly. Don’t try to push through it. The no pain no gain rule does not apply to joints, it applies to endurance.”