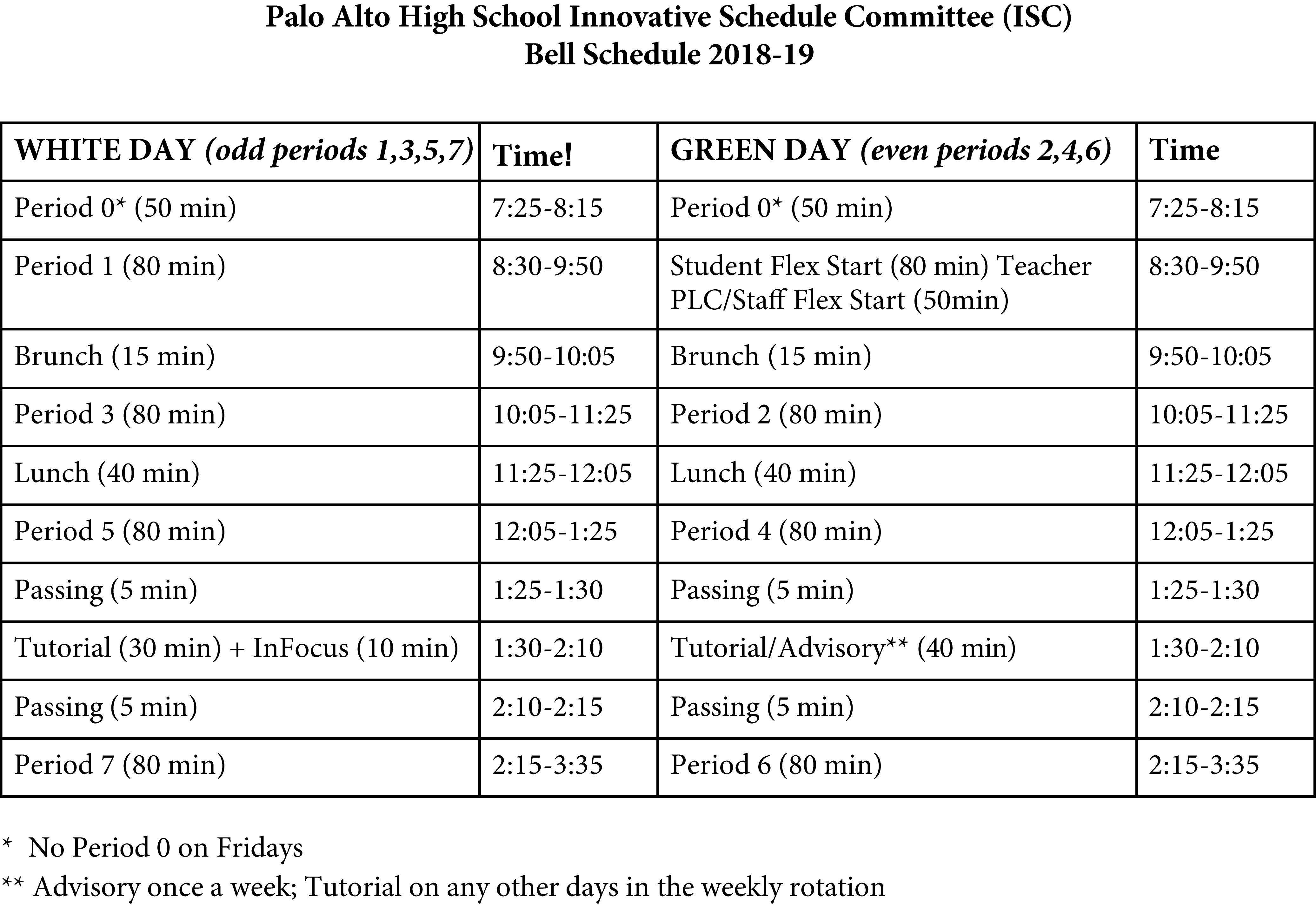 Breaking down Paly’s new bell schedule for next school year

As sleep deprivation and stress plague students at Paly community members have created a new bell schedule for the upcoming year that will hopefully increase productivity and reduce stress. The Innovative Schedule Committee (ISC), a group of Paly students, parents and teachers, has worked throughout the year in order to implement a new system.

The final schedule will eliminate of C days and alternate every week between even and odd periods, creating a two week cycle with the even days having a late start. Every week, the Monday schedule will alternate between even and odd. In addition to this structural change, each class period will be shortened by 10 minutes to 80 minutes long, and a daily Advisory or Flex will be implemented in the the middle of the day.

While finalizing the bell schedule, the ISC met frequently to discuss different schedule options, as well as the pros and cons of each possibility. Throughout the process, the committee conducted surveys and held focus groups for parents, students and community members.

The new bell schedule has a significant structural change, switching to a complete block schedule. While some may not support the unfamiliar schedule, Corrie Sid, a parent representative on the ISC, explained the reasoning for these changes.

“Several years ago there was a survey done to the student body and the parents,” Sid said. “The feedback that came back said a lot about the negative impact of C days and the negative impacts of the start times and student well-being.”

Although the ISC created the new bell schedule with the hope of enforcing positive change for students, concerns have arisen within the community regarding potential negative effects. In response, the committee is planning to work with administration to ensure smooth transition from the old schedule to the new one.

“The later end time could pose a problem for athletes and that’s something that we totally recognize, however we hope to mitigate the problem as much as possible through implementation and working with [the athletic department],” said student ISC representative David Foster.

In addition to the removal of C days, a 30 minute Flex session will be implemented in the middle of the day. This session will be included to reduce cuts and allow students to get extra work done during the school day, as opposed to staying after school.

“The biggest change that students will dislike is that they will be required to be somewhere for 30 minute Tutorial or Advisory five days a week,” said ISC teacher representative Samuel Howles-Banerji. “It’ll be in the middle of the day so it’ll be harder for them to skip and there will be consequences if they skip it. There will be attendance policies taken and enforced.”

Another concern that students and teachers may have regarding the new bell schedule are the shorter 80 minute periods. Although lesson plans may be altered due to the changed class time, Howles-Banerji believes it will have a minor effect on his classes next year.

“I don’t view it as it being that huge of a change,” Howles Banerji said. “I think it means that I have to be a little tighter on my beginning-of-class and end-of-class routines. It may mean that I nip a few minutes off of reviewing homework in the beginning of class and fewer minutes to start homework at the end of class. But we have 30 minute Flex everyday.”

In addition to Flex time during the school day, a late start on even days will allow for students to utilize their morning time for make up work or to simply catch up on sleep.

When designing the schedule, one of the committee priorities was creating a system that would lessen stress for students.

“The ability for students to have a big chunk of time in the morning where they can catch up on work, where they can sleep in or take tests can be hugely advantageous for students,” Howles-Banerji said. “Right now, if they stay after school to take a test, they only have a 90-minute window, and everybody is there to take a test, and the testing center closes at five o’clock and so they are very crunched on time. Now if they have this time in the morning everyday, it will reduce some of that workload.”