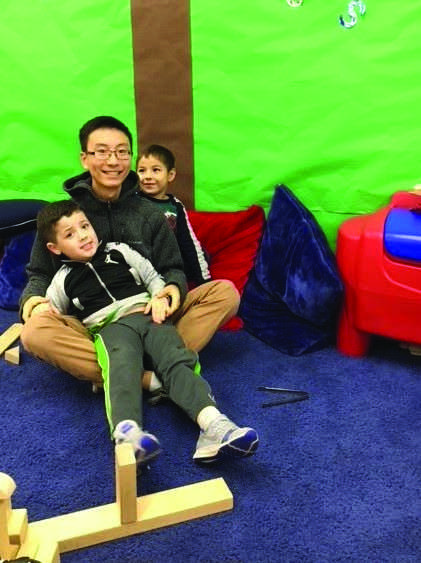 Although Early Childhood Development (ECD) is in its fourth year, ECD teacher Hilary McDaniel can name all the male students she has ever had in the class off the top of her head. Even though ECD is a course open to any sophomore, junior or senior, only 20 percent of students enrolled in the class this semester are male.

The few male students who do enroll in the course have had positive experiences, McDaniel said.

“What I like best about ECD is that I get the opportunity to go to a preschool and [I] really enjoy spending time with the kids. On top of that, I get to develop my own lessons on motor skill training as well as cognitive skill learning and test it on the kids.”

ECD covers children’s psychology and development. Members of the class also plan lessons for younger children. It allows students to take a more hands-on approach than in a traditional classroom setting. In an average school week, the class spends the “C” day schedule learning in the classroom with a lecture. On the two block days, it takes a bus to the Greendell School in Palo Alto — which hosts the Transitional Kindergarten (TK) Young Fives Program — to work directly with kids in the classroom. The Young Fives program is for children who are unprepared for the more academic environment of kindergarten after preschool.

One reason it’s important to have more males in ECD is to create role models for the preschool boys. McDaniel says that many of the teachers at Greendell are female, so having more high school boys to interact with the younger boys gives them more males to look up to.

The lack of boys in ECD correlates with gender roles in society, according to McDaniel. Childcare has traditionally been viewed as a job for women.

McDaniel’s husband, for instance, wasn’t interested in learning about childhood development until he had kids of his own.

“He’s in a tech background, so he didn’t get … any sort of psychology or anything,” McDaniel said. “Now he’s interested in it; he has a more practical reason.”

She also cites her cousin, a nurse, as someone who wished he could have had an opportunity like ECD earlier in his life. If he had, he may have realized childcare was more of an interest of his, according to McDaniel.

“The jobs for women [in the past] were still surrounding the family and the children, like being teachers,” added junior ECD student India Phills, “and I feel like that’s kind of a stereotype that still insists.”

Another contributing factor to the gender inequality is traditional standards of masculinity.

“[G]uys are forced to hide their emotions. Since they were young, they were expected to act stronger than girls. This also means that it hinders guys from really [practicing] emotion recognition as well as how to deal with it.”

Additionally, many students assume ECD is a class for those who want training as future responsibilities as parents and therefore rule it out when determining their course selection, according to McDaniel. She also said that students often assume that the class is for pregnant teens.

However, according to McDaniel, these misconceptions have no basis in truth. Students who do enroll in the class choose to sign up for many reasons other than parenting. One example is junior Alex Daw, who wanted to sign up for ECD but didn’t have room in his schedule. He wants to decrease the stereotype of having white female teachers.

“A way to break that is one African-American [teacher] who is male, cause that doesn’t happen a lot, and that’s a new thing we can bring.” Daw said.

While it’s a good class for those who want to become parents, McDaniel points out that ECD is also a great hands-on opportunity for anyone who wants to work with kids in the future, be that a pediatrician, teacher, camp counselor or any other profession involving children. Phills, for instance, found she enjoys working with kids by being a camp counselor, and has found out through ECD that she wants to be an early childhood educator. McDaniel says that in order to combat the gender disparity in ECD, it is imperative that students spread the word about the class and tackle the larger issue of gender roles.

McDaniel said, “I think changing the messaging and I think as we allow men to fill non-traditional male roles in society and encourage more… diverse definitions of masculinity we will see more changes.”