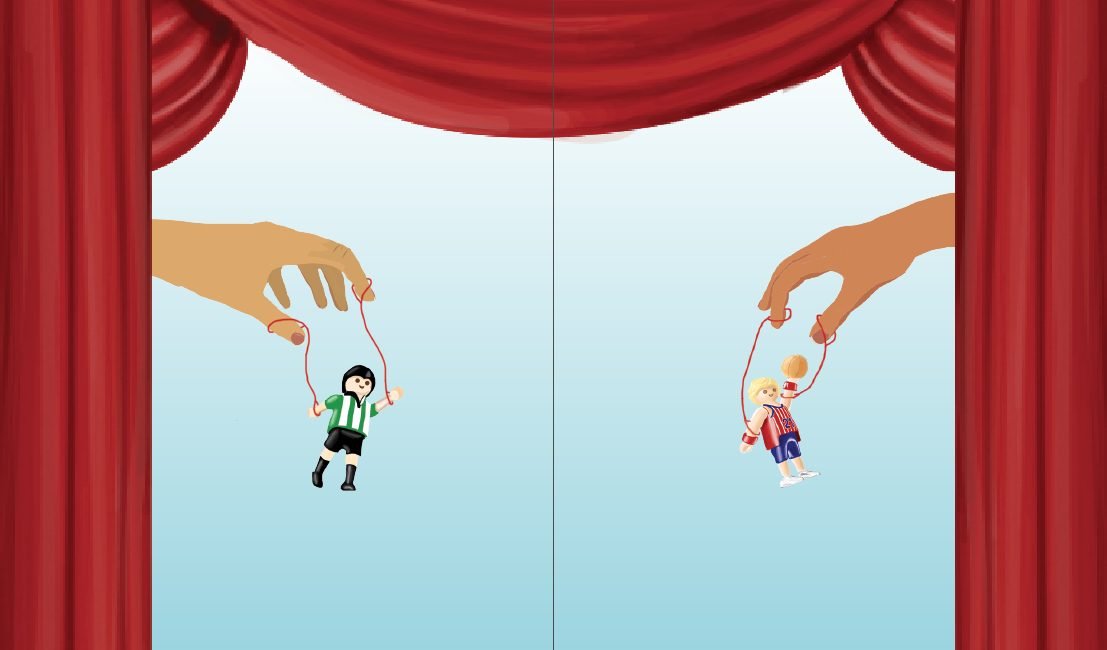 As Jake Varner steps up to the mound, parents bombard him with misguided encouragement. All eyes on him, parents strain their voices yelling ,“Strike him out!” Little do they realize, this persistent shouting just adds to the pressure that Varner already feels.

In a community driven by high achievement, many youth sports have become ridden with overbearing and overly involved parents.

These parents manifest in a multitude of ways. Some pay for extra private lessons and expensive training, some yell distracting phrases at the children.

According to Paly parent Jane Varner, negative parental involvement in sports can drive a child to hate the sport they once loved as well as cause the child to lose ownership over their own athletic pursuits.

t the high school level, the opportunity for college recruitment drives many parents to put an unnecessary amount of pressure on their child, resulting in a toxic environment for young athletes.

According to girls varsity volleyball coach Benji Saetang, there is a lot of pressure put on some of his players, specifically regarding college recruitment.

“There is more pressure on the college part because many parents are thinking about the scholarship money,” Saetang said. “They don’t think about the student’s well being, their mindset and what they want to do.”

According to Saetang, parental pressure can reveal itself in many forms.

“One way is overbooking their kids, pressuring them on the team when they are on the team already and they also keep on pressuring them if they’re not a starter to start,” Saetang said. They also can pressure the coach like ‘why isn’t my kid starting’. They’re butting into the player’s lives and athletics.”

Although an over involved parent can be toxic for the coach and player, a parent who is not involved and does not care can be harmful as well.

“You have another side where the parent doesn’t care; they just don’t care,” Saetang said.  “They’ll let the player do whatever they want and then player really does not accept authority well. So, if a parent doesn’t have authoritative conversations or interactions with the player at home, the player will often not have respect on the court.”

According to Saetang, the effects of a lack of discipline can lead to detrimental effects for the team and often do not prepare the player for the discipline that comes with team athletics.

“Those players think they can do whatever they want and talk all they want,” Saetang said. “So if the parents aren’t teaching them great manners and work ethic, coaches can drive players away because they’re not used to that type of environment. But, the environment that the coach creates in practice is necessary to play on a sports team.”

Through their actions, the uninvolved parent can drive a wedge between the coach and players, creating conflict within the team. Despite this obstacle, a coach can gain the trust of their team through slow progress.

“A player who doesn’t really have respect will oftentimes question the coach’s methods,” Saetang said “The thing about those players is you have to gain their trust first, because once you gain their trust it’s easier for them to understand your coaching.”

“The perfect medium is a parent that is supportive and doesn’t ask for results and is just asking ‘ok what did you learn today?’ or ‘is there any way we can make that better?’’

Parents that are not too involved are usually supportive of whatever sport the kid wants to play rather than pressuring them on playing time,”  said Kevin Cullen, a junior who plays on both varsity lacrosse and varsity football at Paly.

“They are most concerned about the kids safety and the fact that they are enjoying what they are doing. The most supportive thing anyone can do for me is simply cheer me on at my games.”

Student athletes also feel the effects of a meddling parent, even if they are not the parent’s child.

“The worst thing a parent can do is push a kid to play a sport that they do not want to play. This often results in the kid putting little to no effort into the sport which is detrimental to the rest of the team.”

Summer Daniel, a Paly junior who has played soccer since the age of 4, has witnessed the effects of harmful parents and predicts that the unnecessary pressure will result in long term effects.

“I think the mental and psychological effects of parental pressure are incredibly detrimental,” Daniel said. “For example I have this one friend and her dad was crazy about soccer and made her play soccer all the time and although she’s a very good soccer player, she has very low confidence and it’s always down on herself so I think I’m always worried about her psychological state and I think a lot of that comes from her parents pushing her too far.”

Professional athletes have admitted to negative effects from parents involvement in their athletic career.

In 1988, Sports Illustrated released a story about the Marinovich family. The story gave America a chance to view the parenting style of Marv Marinovich, father of Todd Marinovich.

Marv, a former football player, was coaching his young son to be a star quarterback.

In his coaching,  Marv would keep young Todd on an extreme diet and subject him to rigorous practices modeled after the Oakland Raiders.

Unsurprisingly, Todd was a troubled young man and a mediocre quarterback with a short stint in the NFL.

His career fell apart due to repeated drug charges and he soon abandoned his football career.

This example, although extreme, shows how a parent who cares too much can drain the sport of any enjoyment for the child.

According to Daniel, many parents also want their child to suppress any pain or emotion while playing.

“I’ve seen parents that don’t allow their kids to cry and if  they cry the parent makes the coach take them out for the rest of the game,” Daniel said. “That takes a hit to their confidence. Or sometimes the child will have team practice every single day after school but the parent still makes them practice every day separately in their free time.”

Jane Varner, a Paly parent of two children who have both participated in Paly athletics,

“I’ve seen a lot of bad parent behavior on the sidelines and I have seen it really impact the morale of the athlete,” Varner said. “It is hard when you’re out there working hard and you see negative body language, facial expressions and eye rolling and, I think that sometimes parents underestimate how impactful their body language and things that they say on the sideline is for the athletes. Not even not for just their own kids, but all the kids.”

Even actions of misguided support can harm the mentality of an athlete.

Varner’s son Jake, a Paly graduate of the class of 2018 who has gone on to play baseball at Azusa Pacific University, experienced frustration with actions from parent in the crowd.

“Jake, as a pitcher, every single time he’s been on the mound in every game he’s ever pitched, there would be parents in the stands yelling ‘strike him out’ and then he would feel like such a failure if he didn’t,” Varner said. “So it’s just complete humiliation. All these parents yelling ‘strike him out’ and they get a hit off you and then it just hangs there like the elephant in the room.”

Varner’s son’s experience pertains to a common source of pressure that many young athletes are subjected too.

Anyone who has been to a youth sporting event is most likely familiar with this occurrence.

For example a child takes a shot on goal and misses, and a collective “ohhhh” of obvious disappointment falls engulfs the sideline.

Or, a child has a penalty shot on goal and the a majority of the parents shout with pressuring encouragements.

In another issue of misguided parental judgement, Varner explains the misconceptions many parents have regarding the relationship between winning and effort.

“I think also you have to acknowledge that there’s a distinction between winning and trying your best. I think on some level parents really want to see their kids try their best and sometimes that get confused with winning.”

Although the addiction to winning and tireless improvement can consume the careers of many athletes, Varner finds a deeper importance within youth athletics.

“The value of youth sports is really learning how to be part of a team and it’s physical fitness, a little bit of discipline, going to practice when the kid would want to be doing something else,” Varner said. “That’s life so it gives you an introduction to that.”