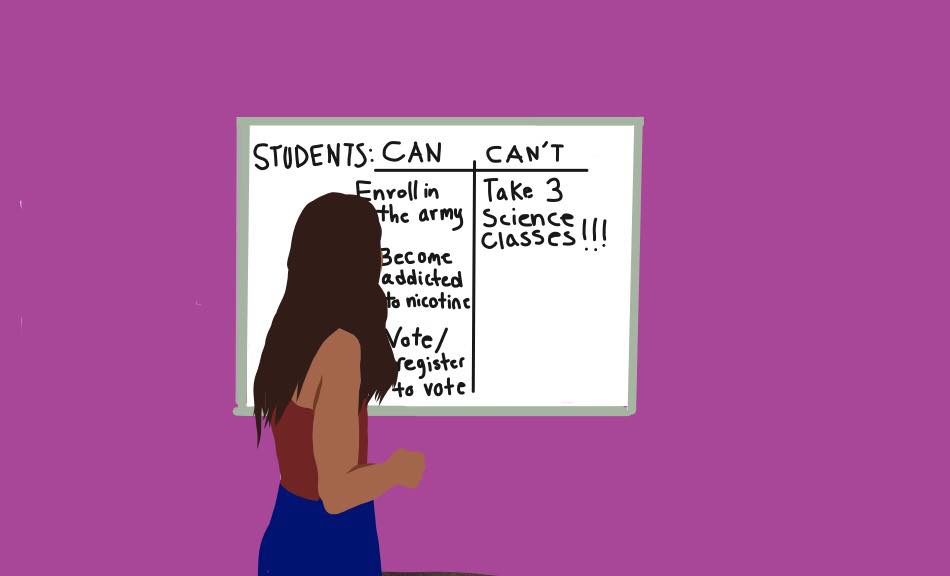 Students should have final say on their schedules

As the school year officially kicks off and the window for schedule changes closes, the usual class-switching chaos in the guidance office is drawing to an end. The chaos in the office is spurred largely by a new junior and senior class, full of eager students trying to take Advanced Placement (AP) and honors classes, for college preparation and for their own interests.

However, students are not trusted to design their own schedule and are only granted partial control over what classes they can take, creating a questionable and unfair contradiction for students in a school where they are expected to be mature, organized and responsible.

According to Susan Shultz, guidance counselor for the Class of 2020 and overseer of class changes, Paly recommends students do not take more than two AP classes.

To get around this, the first thing students need to do is to sign the AP contract, which states all the expectations and warnings for taking multiple APs, and requires a parent’s signature.

However, more than just a parent signature is required for finalizing a schedule that exceeds the recommendation. When students make their schedules at the end of the year, their teacher advisor reviews and makes changes or suggestions based on the student’s extracurricular activities and work habits.

The schedule is then signed and processed for the next year. When the start of school rolls around though, hundreds of students flock to the tower building to modify their schedules. To do this, they get a slip of paper on which they specify what schedule change they would like.

With the necessary signatures, the slip is turned into the guidance office to be approved and processed. However, there are still restrictions to student’s ability to customize their schedules, and many students aren’t happy about it.

Most students find it unfair that in a school where academic expectations and college requirement standards are high, they are not granted control over one of the main factors that determines their high school experience.

One of these restrictions affected junior Naomi Jecker, who decided to take on a course load featuring an honors science and three APs, two of which were science courses.

“I had brought it up with my parents beforehand, who agreed that if I were to scale back on my sport and manage my time that I could handle it with their support,” Jecker said.

Despite this, she ended up dropping the additional honors science course to get her schedule signed by her teacher advisor. After thinking it over during the summer, Jecker attempted to add back her additional science course at the beginning of school.

“I decided to try and add the class back to my schedule at the start of the year because it’s a class I am really interested in,” Jecker said. “I got my parent signatures and turned it in, only to receive it back with a note telling me I can’t take three science courses.”

This is an issue that many students are upset about — at the end of the day, they are the ones taking the classes, so they should be able to decide which classes they take.

In a school where academic expectations are exceptionally high, students should be making their own decisions as young adults preparing to make their way into the real world.

Making choices based on ones own judgment  is an invaluable life skill, and can not be learned if students are told what they can and cannot handle, rather than deciding for themselves.

However, many people believe that the competitive climate at Paly, along with parental pressure, affects the mental health of students negatively and dictates a need for restrictions on AP classes. While these people are correct for wanting to counteract the  overly-competitive and harmful culture of academic pressure and too many APs, the fundamental ideology in their approach is deeply flawed.

Stress cannot be solved by creating more rules; this only angers students and further stresses them out. To end the aforementioned academic pressure, the change must come from within, and that means that high schoolers should be allowed to determine their own schedules.

Generally speaking, teenagers are passionate, stubborn people, often learning best through real life application and facing the consequences, and as with most life skills. The best way to learn something is to experience it firsthand. Students in AP classes are juniors and seniors, and need to be more directly responsible for themselves in order to learn how to make good decisions.

Additionally, there is a period of time at the start of the year where classes can be changed if a student decides they no longer want to take as many APs, and classes can be dropped at anytime throughout the school year. If a student is being pressured into taking a class by a parent, they could then speak to their guidance counselor privately. After all, not all classes that are requested are available. For further school protection, more contracts like the AP contract could be written up for the student to sign, acknowledging responsibility for their decisions.

Although it may seem like a trivial matter, the world is in a time unlike any other in its history– a time in which children are being forced to grow up, mature and take responsibility for themselves.

In light of the huge global struggles this generation has to remedy, giving them this stepping stone to help them become better decision makers should be a no brainer. Students should get to have the final say on what they want in their schedule. It is a small change that will help teach crucial skills, and if we continue to withhold these skills from students, we are ultimately doing them a huge disservice.