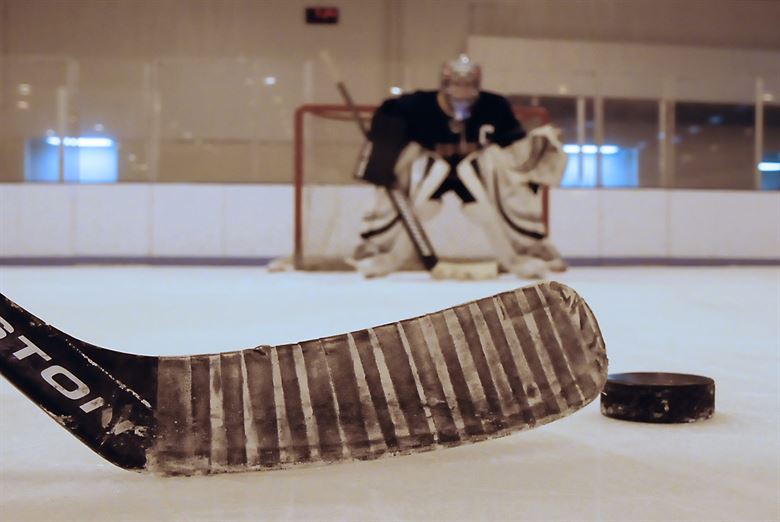 Premiering this winter, Vikings tie their skates for hockey

This winter, Paly will be adding to its array of athletic programs with the addition of a new ice hockey team. While many other sports offer athletes the opportunity to play on both the club and high school level, on the West Coast, ice hockey has little in the way of high school programs. However, a recent growing interest in the sport has spurred many high schools on the Peninsula to create ice hockey programs so that they can be represented on the ice.

Because ice hockey is not a California Interscholastic Federation (CIF) sanctioned sport, the team will be a Paly club organization and will play in the Pure Division of the Sharks High School League — “pure” meaning comprised solely of high school players. In addition to Paly students, the new team will also accept players from private schools in the Palo Alto Unified School District.

Craig Janik, head coach of the new Paly ice hockey club, was inspired to create the team after see-

ing the talent present in the town and the lack of a high school program for them to play in.

“I have lived in Palo Alto for many years and have coached youth hockey, and it often occurred to me how many very good players happen to live in our town,” Janik said.

Janik also has three kids who play hockey, one of which has played for the Jr. Sharks travel team before, which is what brought the Sharks High School League to his attention.

Additionally, the National Hockey League (NHL) is providing funding to high school programs across the country, which has created a great opportunity for new ice hockey teams to be formed.  Senior Cole Sotnick, an experienced hockey player, is considering joining the team.

“Hockey is a growing sport in California, so it’s important to support its growth with new teams,”

Hockey is indeed growing in California. According to USA Hockey’s yearly registration reports, in 2011, there were just over 22,000 hockey players in the California. In the last seven years, that number has increased by 50 percent, and is now just shy of 32,000.

The number of under-8 players in particular rose by 250 percent in that time frame, showing that hockey is positioning itself in the mainstream of youth sports in California.

With the help of the NHL and the growing presence of the Sharks High School League, ice hockey will continue to grow in California.

Another player who plans on joining the team is senior Adam Woods.

“Hockey has been something I’ve been doing all my life, and getting to play to represent my school is an opportunity I couldn’t pass up,”

For many athletes, playing for their school adds a new dimension to the game because it feels as if they’re playing for something larger than themselves, fighting for school pride. This is something that is missing from club sports which are much more self-interested.

“I’ve always wanted to play a sport for Paly but couldn’t,” Geller said. “I think the idea of representing your high school in a competitive environment was the incentive that made me want to join.”

For Geller, the absence of a Paly hockey team left him with no options to represent his school in an athletic capacity, but now in his senior year, he finally can.

The team will play a 12 game regular season over a six month period against other “pure” high school teams such as Bellarmine, Mitty and St. Francis. The games will be played on Tuesday evenings at the Shark’s practice facility in San Jose.

The team will play a 12 game regular season over a six month period against other “pure” highschool teams such as Bellarmine, Mitty and St. Francis. The games will be played on Tuesday evenings at the Shark’s practice facility in San Jose.

Janik hopes the team will be competitive in its first year playing in the league. Over half of the players on the team have already played at this level before and that prior experience will be key to their success.

For those looking to join, according to Janik, it’s not too late.

“The roster is solid but we have room for a few more players,” Janik said. “If there are any other experienced players, they are welcome to contact myself or any of the players, or show up at the table at the Club Day event.”

Additionally, the team is looking for one or two more advisers in addition to their future club adviser, Paul Hoeprich, who is an experienced player himself.

“As an avid hockey fan and goalie, I offered to help,” Hoeprich said. “I really wanted to help bring hockey to Paly.”

The team is hopeful that they can extend Paly’s winning culture and athletic prowess into the ice rink and making the school proud.