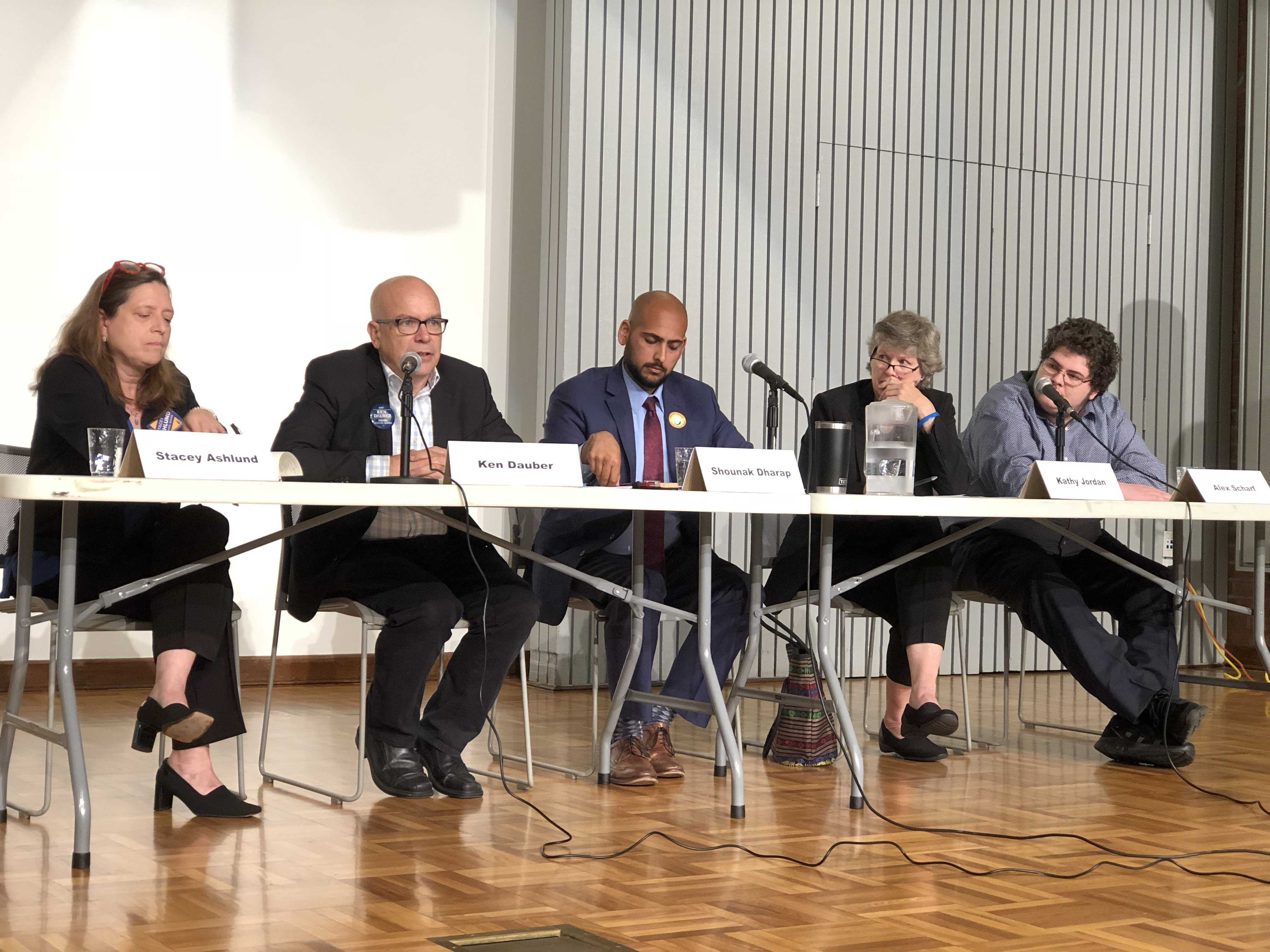 Five newcomers and one incumbent board member are currently running for two open seats in the Palo Alto Unified School District Board of Education election in November.

Dharap, now a 27-year-old attorney, graduated in 2009 from Henry M. Gunn High School. This was around the time of a suicide cluster in Palo Alto, which he said will allow him to connect to students in the district.

“It gives me a kind of first-hand experience, a deeper understanding of what students are going through. More specifically, I remember what it was like to live through some of these big issues that students are dealing with in this district, specifically whether that’s mental health and wellness.”

If elected, Dharap said he wants to bring effective oversight to the school board, instate innovation and expand programs that engage students into the process of learning, such as the Connections program.

According to the JLS website, Connections, a program at Jane Lathrop Stanford Middle School, uses project-based learning to teach the whole child: in the social, emotional, intellectual aspects and teach students as individuals. They also give parents a say about the school, and teach that less is more, emphasizing the importance of putting depth over coverage. Students learn to have the teacher as a guide.

Dharap also said he is an advocate of community building. He has an open door policy for his campaign, offering students the opportunity to be a part of the campaign and learn more about behind the scenes, believing that transparency is necessary in the school board to aid the alleviation of the undue stress miscommunication brings.

“I’m not running for the school board because I have spare time to fill,” Dharap said. “I’m not running without reason; I understand that public service is sacrifice. I’m doing it because I feel very passionately, very strongly about giving back to the district that has given me so much.”

The youngest candidate in the running, Scharf, graduated from Paly in 2015 and now attends Foothill College as a part-time student. He believes his youth is an advantage compared to the other candidates.

“I think [the other candidates] don’t necessarily understand that everything someone in school today has to go through compared to what they had. I think my biggest advantage is that I’m a student currently and I think I have a good grasp on what the needs of the students are.”

One of Scharf’s main priorities if elected would be improving the resources available to students, especially those relating to mental health.

“One of the main things is budgeting to mental health and a lot of the systems and services provided to mental health are [only the absolute necessities], so they provide the bare minimum of what is considered counseling with trainees that have no experience at all and simply provide lackluster service,” Scharf said. “And if we’re able to validate a decent budget toward mental health and provide quality services, I think that’s going to be a very important thing.”

Parents Ashlund and Jordan both expressed their ideas of what kinds of changes they want to make. The impact they want to have is based on their children’s experiences in the Palo Alto education system.

Like Dharap and Scharf, Jordan said the school board should improve by bringing accountability and transparency to the current system, along with making sure students are put first.

“I offer common sense, persistence, tenacity and the commitment to focus on the well-being of our students and our community. I will work to be an independent leader and advocate for all of Palo Alto, to usher in a new era of which we can all be proud.”

As a stay-at-home mother, Jordan said she found ways to incorporate herself into her children’s school community by volunteering in her children´s classroom for more than 10 years.

“I believe that the breadth of my career, in the private and public sector, combined with my experience as a parent, have prepared me extremely well to meaningfully contribute to our community as a member of the school board,” Jordan said.

Ashlund said she is putting a large emphasis on making sure students feel happy and their voices are heard. She also said she is an advocate for developmental assets and inclusion.

“We talk about academic excellence because we want our kids to get into a good college. You know, ‘good college,’ get a good job, earn money and be happy and successful right? But we also want out students to find joy in learning, to really enjoy it and love it.”

Another aspect of  Ashlund’s campaign is educating parents and the general public on the importance of balancing academic success with being socially and emotionally successful.

“From talking to people, we’re really not serving equally, and that’s why I’m running for the Board to include all students, to support all students to be happy, healthy and successful in life,” Ashlund said.

Ashlund also emphasized individuality and the importance of ensuring that as many students as possible leave the district feeling satisfied both emotionally and academically and treated with the importance that all individuals deserve.

The final newcomer to the school board race is Christopher Boyd, who is the director of a nonprofit after-school STEM program for students called InstED, which was recently found to have some inconsistencies. According to a Palo Alto Online article, it is not a non profit organization as previously claimed as it was not found in the California Secretary of State’s list of registered businesses. The article continues, stating that tax ID provided by Boyd is a different Palo Alto non profit called the Institute for Environmental Management, an organization Boyd has not worked for. Boyd did not respond to emails and LinkedIn messages seeking comment on his school board candidacy.

Incumbent Dauber said he wants to strengthen the district’s innovative classes and programs for students. He said that although the district has made progress throughout his last term in this area, there’s still a long way to go.

According to Dauber, he would continue stricter enforcement of the district’s homework policy, which states students should receive about 90 minutes of homework a night. He would also like to enforce policies that prevent the stacking of multiple projects and tests, work on improving special education services and closing the achievement gap.

Dauber said his years spent as a student wellbeing advocate in PAUSD prior to joining the school board make him a good candidate as well.

“I have a very solid understanding of the district. I expect to share my opinions and experiences with the other candidates. I think voters will judge me on the basis of my accomplishments, which I think make a good case for my re-election.”

The election will take place on Nov. 6.

Note: This is not an endorsement.