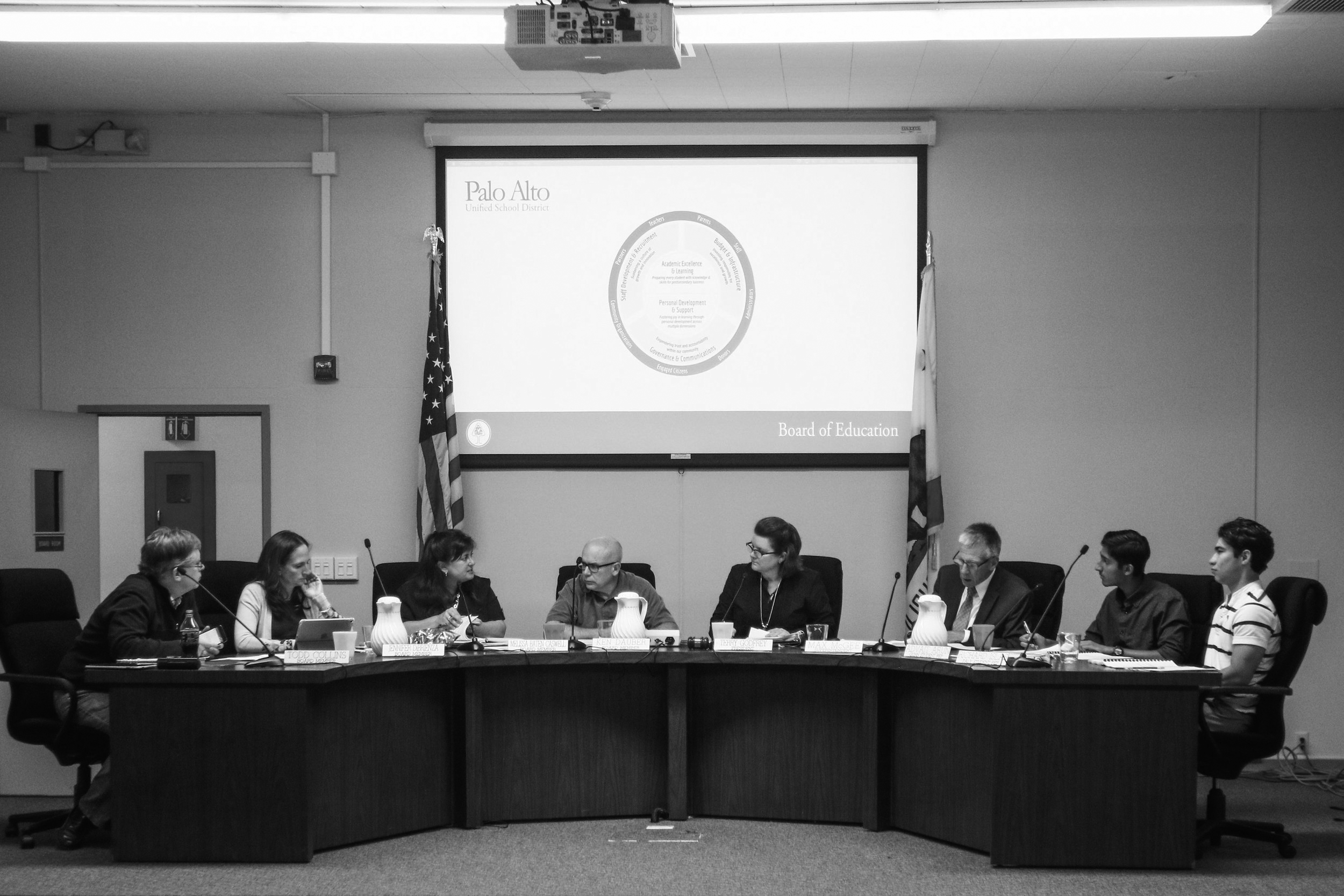 Alleging that Palo Alto Unified School District’s upcoming Board of Education election is discriminatory toward minority voters, a Southern California law firm has indicated PAUSD could be the next district it targets for legal action.

According to Board President Ken Dauber, the Board would like to be able to gather public opinion before addressing the August letter from Alexander Tomescu of the firm Wewer & Lacy.

In his letter, Tomescu claims the at-large election system PAUSD uses to elect candidates for the Board of Education results in “minority vote dilution” based on the geographic racial polarization of Palo Alto’s voters, and therefore violates the CRVA.

Tomescu’s letter urges PAUSD to “voluntarily change its at-large system of electing board members” and warns that if PAUSD does not comply, the Laguna Niguel law firm “will be forced to seek judicial relief.”

In the letter, Tomescu also alleges that the at-large voting system currently in practice “allows a bare majority of voters to control every seat,” and instead suggests a system in which political units are divided into single-member districts in order to “facilitate a minority group’s ability to elect its preferred representatives.”

The PAUSD Board discussed the letter in closed session on Sept. 4, and discussed it publicly on Tuesday.

Tuesday’s meeting was a chance to hear the public’s opinions, which will influence how the board plans to respond, Dauber  said.

At the meeting, William B. Tunick, board attorney of Dannis Woliver Kelley, LLP, explained the legal background of lawsuits similar to this potential one. In its history, there have been multiple cases and settlements, with close to 200 school districts and over 20 community colleges districts agreeing to transition from at-large election systems.

According to Tunick’s presentation, there has been no successful defense against California Voting Rights Act challenges since the institution of the Act in 200 1because of  the high litigation cost from cases like this for school districts.

The board is now faced with two choices. It could decide to change the election system. If the board chooses to do this, Tomescu would receive reimbursement of up to $30,000 from the district in litigation fees.

If the board decides to refute the recent allegations, however, they must prepare to defend themselves against a more costly lawsuit, one which no defendant has won.

Despite the law firm’s original response deadline of Sep. 24 having passed, Tomescu has agreed to extend the deadline for a district response by 45 days.

On the other hand, Wewer & Lacey’s preferred system involves dividing  Palo Alto into defined, compact political areas, each of which would elect one candidate to the School Board.

As an example of how the current system discriminates, Tomescu used the school board elections of 2014 and 2016.

In the election of 2016, “a candidate of Asian descent ran and lost to non-Asian candidates,” Tomescu said. “As a result of racially-polarized voting, Palo Alto does not appear to have any Asian elected representatives.”

The credibility of this example as evidence of unjust voting has been called into question by Dauber, however.

“I don’t see much evidence that minority candidates don’t do well in school district elections, and it isn’t apparent to me that the viewpoints of minority voters are not reflected in outcomes on the school board.”

He cited minority candidates who had won various district elections in the past, such as Barbara Klausner and Amado Padilla. Additionally, he referenced the 2016 candidate who he had mentioned in the letter.

“Subramanian might well have won had he not dropped out of the race,” Dauber said.

According to Dauber, while he agrees voting by geographic district  can be effective based on the concentration of different ethnic groups into districts, he doubts the worthiness of the case applying to the Palo Alto community. “In our situation, I don’t think that we actually have that geographic concentration. I don’t think district voting would be an effective solution even if there were a disparity in voting,” Dauber said.

Using this data, Tomescu points out that while the population in PAUSD is made up of many races, the School Board lacks Latino, Asian and African-American  representation, and blames the at-large electoral system. Tomescu’s letter also mentions online racial appeals complaining about the issues of school segregation, and mentioned the use of the hashtag  “#BoardSoWhite” calling the hashtag a “direct reference to the lack of minority representation on the Board.”

In terms of this year’s election, regardless of whether PAUSD cooperates with Wewer & Lacy, the election will continue, according to attorney George Schisler, a former PAUSD parent. If a suit were filed, a judge would grant an injunction for the election to be effected.

“In a matter like this, I think an injunction would be extremely unlikely,” he said. In addition to the subjective issues that could potentially surround the suit, “There are different legal requirements for when at-large voting is deemed to be unconstitutional. The minority group must be sufficiently numerous and compact to form a majority in a single district. The minority group must be politically cohesive, meaning that they tend to vote similarly, and the majority vote is sufficiently a block to enable it to defeat the minorities’ preferred candidate. All those things have to be proven to show that  an at-large system is discriminatory.”

Students of color seem to be unsure what to make of the lawsuit threat, and whether or not districted elections would get to the root of the problem.

However, Buendia doubts that this lawsuit have the potential to fix the bigger issues at play.

“We live in Palo Alto — most of us are liberal. We’re not that split up. Dividing us up into factions is not going to do anything,” Buendia said. “I understand what they were trying to achieve, but I don’t think this is a problem that can be solved this easily. Racism and bias in general, they go a lot deeper.

It’s going to be a long while before we live in a world where it won’t affect our schools and elections.”

In addition to the legal complications, this lawsuit threat could raise potential new issues for Board of Education candidates to consider in their campaigns.

Board candidate Shounak Dharap would favor switching to district elections. He said regardless of the ethnic dispersion in Palo Alto, district elections would  allow for more minority and non-traditional candidates to run, which in turn would create more representation for those groups. However, he acknowledges there are pros and cons for either side.

“The cons of a districted election can be that it’s a lot harder for consensus building when you have a board made up of people from various geographical segments,” Dharap said. “There may be more tension with respect to building infrastructure. For example … building the magical bridge playground. If we had a district council elections, then maybe there would be contention as to where that should be built.”

Despite these cons, he said districted voting would be beneficial, even in Palo Alto, where some argue voter disparity isn’t an issue.

“I think a lot of people say Palo Alto is spread out evenly, so it doesn’t really apply and won’t help the situation,” Dharap said. “Even assuming that’s the case … I think they [districted elections] would [be beneficial], because the first and biggest bar to political access is money. When you have a population where the minority is spread evenly throughout, it makes it a lot harder for non-traditional candidates to run for office against traditional candidates who have more access to resources and exposure.”

Dharap also said the average cost of running an effective campaign is excessive and could decrease if candidates only had to get exposure in their own district rather than the city as a whole.

“What it does is it allows non-traditional candidates to run for office, and those are younger people, people who are lower income, and statistically speaking, minorities,” Dharap says. “Diversity and inclusion are some of the shared values that we have in Palo Alto, so we should do what we can to trend towards that inclusion. This is all assuming that Palo Alto is fairly homogeneous in its spread.  I don’t think that’s true. I think dividing into district elections could actually bring us closer together.”