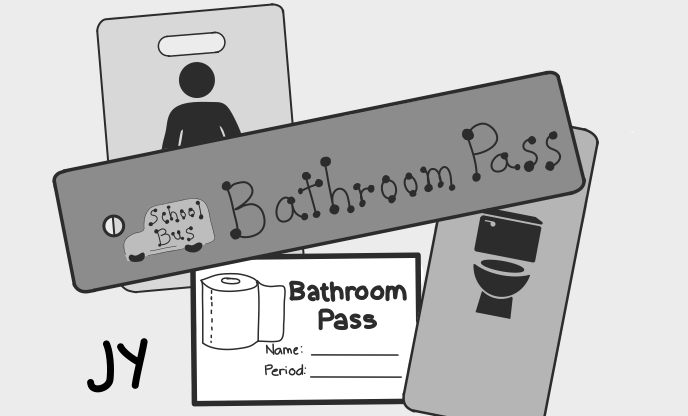 The uncertainty of the process of going to the bathroom troubles any individual awaiting the relief that a long-awaited bathroom visit can provide.

Across classes, students experience different procedures for receiving permission to go to the bathroom. The variety of procedures, ranging from sign-out sheets, to printed bathroom passes, to the lack of an actual procedure, make students unsure of what the process of going to the bathroom looks like. Additionally, the procedures in some places are often unfair to the students.

The worst method used is printed bathroom passes distributed to students at the beginning of each quarter or semester.

This method allows teachers to limit the number of times students go to the bathroom during a given time period, which is an unfair restriction.

Generally, the number of bathroom passes given to students is two to four per semester. Students who need to go to the bathroom often run out of their passes and are then unable to fulfill the basic human necessity of relieving themselves.

The only benefit of this system is the ease of communication between student and teacher.

A student can simply hand his or her bathroom pass to the teacher, or place it near them and head to the bathroom without disrupting the class, since no conversation is required.

However, the faults of this method outweigh the benefits. Limiting the number of times students can go to the bathroom simply shouldn’t be allowed.

The main benefit of this system, non-verbal communication, can be obtained through a much more fair system that doesn’t limit a student’s ability to use the bathroom: a sign out sheet.

In some classes, teachers use a sign out sheet to track which students go to the bathroom.

It appears sign out sheets are not scrutinized unless a teacher wishes to see who went to the bathroom during a certain time period, in case of a fire alarm or similar drill, or how often a student goes to the bathroom if a problem rises regarding the student’s grade and class participation.

Paly physics and chemistry teacher Michael Lupoli, who uses a sign-out sheet system in his classes, says the sheet can be helpful for assessing a student’s bathroom tendencies.

According to Lupoli, on occasion, he’s pulled the sheet out to show parents when there’s a concern about how much time their student is spending outside the classroom.

Since a teacher can see a student using this sign out sheet, verbal communication isn’t needed, which is beneficial for students and for not disrupting the flow of the class by interrupting the teacher to ask for permission.

Among all the systems, the sign out sheet provides the best balance between accountability for the student and ensuring that students have the ability to use the bathroom when they need to.

According to Lupoli, this sign out sheet doesn’t prevent them from making choices of when to use the restroom and when not to use the restroom. He lets them make that decision, but will coach them if he notices a trend or a problem. He said that if you need to go to the bathroom, you need to go and that he doesn’t have any way of knowing if they’re telling him the truth, and he’s not going to question them on that kind of thing.

If a student does abuse their freedom to use the bathroom and they miss significant classroom time, the sign out sheet gives the teacher a tangible method of identifying the student’s time spent outside of class.

In addition, in case of emergencies, the sign out sheet provides a reliable way of knowing where students are.

The third common system is the lack of an actual system.

Some teachers ask for students to raise their hands and simply ask to go use the bathroom, while others indicate that it’s acceptable for a student to simply get up and leave, whenever they need to.

This system gives students the most freedom by far, by making them the only ones responsible for the class time missed when they use the bathroom.

AP Psychology and Positive Psychology teacher Chris Farina said he feels comfortable giving his students the freedom to monitor their bathroom use on their own.

According to Farina, the reason he has no system is because he teaches a generally really mature group of seniors, and he trusts them both to know when it’s a convenient time to go and use the restroom and to not be out too long.

Farina said he has had occasions where students abuse their bathroom privileges, but he doesn’t think having a system is the most effective way to address the problem.

According to Farina, he doesn’t need the policy  much as just a chance to talk to students.

One major downside of this system is in some instances, such as in case of a fire or earthquake, it would be beneficial for the teacher to have a written account of which students were outside of the classroom at that given time.

Both the sign-out sheet and the lack of a system provide students with the freedom teenagers should be treated with.

Any system that sets a limited number of times a student can go to the bathroom should be removed, as it simply unfairly restricts a student from filling their basic bodily needs.

Bathroom policy should be standardized across Paly, making it the norm for a teacher to use a non-restrictive sign out sheet to be able to track their students in case of bathroom privilege abuse, or an emergency..

According to Farina, he understands why people might want students to sign out but he just doesn’t feel the need to have anybody ask for permission.