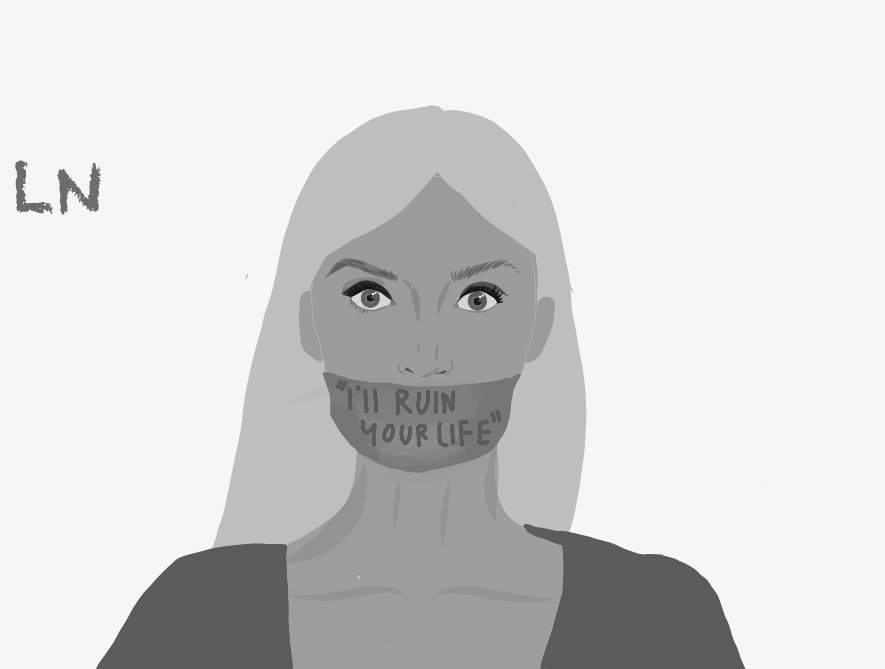 As the worlds of sexual harassment and social media inevitably intersect, they have cultivated a new kind of easily erased footprint for harassers. Presenting itself in the form of threats, unsolicited pictures, inappropriate comments and many other possibilities, online sexual harassment has become all too familiar for many teenagers.

Not all harassment begins online. For many victims, their harasser is someone they know, who often threatens to tarnish a reputation or send or demand sexual pictures. Through popular apps like Snapchat, harassers can send messages that are virtually untraceable, as they disappear in seconds.

Eva, a Paly student who has asked to have her name changed to protect her identity, said her harassment incident began her freshman year. A senior boy sent her a picture of his genitals on Snapchat.

“It was shocking and unwelcome. I had begun hooking up with one of his friends, and he berated me with messages, and he said if I did not provide him with details he would ‘ruin my life’ because he knew I had had sex with the friend and I didn’t want anyone to know.”

A constant cycle of verbal harassment and coercion led to stress and internalization of the messages the male student would send her.

“[His threat of ruining my life] was terrifying for me, as I had intercourse with his friend and did not want to be labeled as a slut, because I was the only one of my friends to have had sex,” Eva said. “Regardless, he referred to me as a slut, accompanied by the phrase ‘the truth hurts.’ Despite his poor reputation, I internalized those words and question whether he is right to this day.”

His harassment stopped her from being able to report or speak about his actions, as she was threatened with the exposure of her own personal information.

Many harassers and abusers use whatever they can to place their victim in the inescapable area of forced agreement. They often dig a hole so deep the victim feels as if they cannot do anything but plead for a way out. His threats to ruin her life came from the fact that he knew that she had engaged in intercourse with the friend, something she was incredibly embarrassed about.

Apps like Snapchat can be a easy resource for these abusers, allowing users to delete previous chats, destroying all evidence and send pictures that only appear for 10 seconds or less. Messages and photographs that could be used as proof of abuse and harassment are are deleted with the tap of a finger, and the victim is yet again voiceless. Although it is possible to preserve messages through screenshots, Eva said she was afraid of the consequences that could come with this approach.

“I found [that] with Snapchat there is no evidence unless you screenshot the picture/conversation, which would notify the individual and probably anger them so it is challenging to address.”

Additionally, speaking of the disconnect present in social media interactions, Wellness Center coordinator Elizabeth Spector said, “You can really hurt somebody and you can really damage either relationships or people’s emotional state or affect people without having to do it to their face. It’s scary to me. So I think I think social media definitely makes any sort of harassment or bullying just so much easier to happen.”

Another simple response many would immediately suggest is to block any form of communication with the alleged harasser. However, when threats of exposure are on the line, cutting off all communication presents itself as a risky option that in some cases, the victim may feel hesitant taking.

Just because the online communication method is cut off does not change the fact that the harasser can approach the victim in person, and the threats remain an issue.

At first, Eva had the intention of never speaking to her harasser again. Unfortunately, fear of hurtful backlash made her reconsider her options.

“I blocked him on Snapchat, although he had my phone number and began texting me soon after. Through fear of further harassment, I unblocked him.”

According to Jayne Hitchcock, president of  Working to Halt Online abuse, there are specific steps that the victim should take in response to harassment. First, she says that victims should tell the relevant authorities and clearly tell their harasser to stop contacting them.

They should also stop all online communication with their harasser through blocking their accounts.

Hitchcock also encourages victims to keep all messages from their harasser through screenshots to prevent the harasser from to deleting the messages themselves.

Although social media is not the sole enabler in perpetrators’ actions, it obscures the boundaries of appropriate social conduct and consequences of negative actions. Face-to-face confrontation is eliminated and direct consequences seem irrelevant.

Though she acknowledges the difficulty of reporting harassment, especially if the victim is facing threats, Spector stressed the importance of coming to a supportive adult when facing a difficult situation such as Eva’s.

“As  mandated reporters, we [Wellness Center staff] do have to tell administration and call in the police for serious situations,” Spector said. “Hopefully people realize that everyone involved would be trying to protect the student victim involved. So if the harasser is is threatening them, I understand it’s hard, but we need to communicate to the victim that they need to report the situation.”

Additionally, Spector specifically encourages students to come to the Wellness Center specifically in order to help them with either reporting or simply talking about the situation.

“We have really well trained people here whose best interest is with the student and can kind of help guide and direct about what’s going to happen in the future and who’s going to be involved. You can have that person as your advocate and as you meet with police or as you meet with administration, or different things like that, so that it doesn’t feel so isolating.”

Through victims coming forward with their experiences and the advice of certified counselors and experts, the subject of online harassment will hopefully become a larger conversation within our community.

Need help for yourself or a friend?