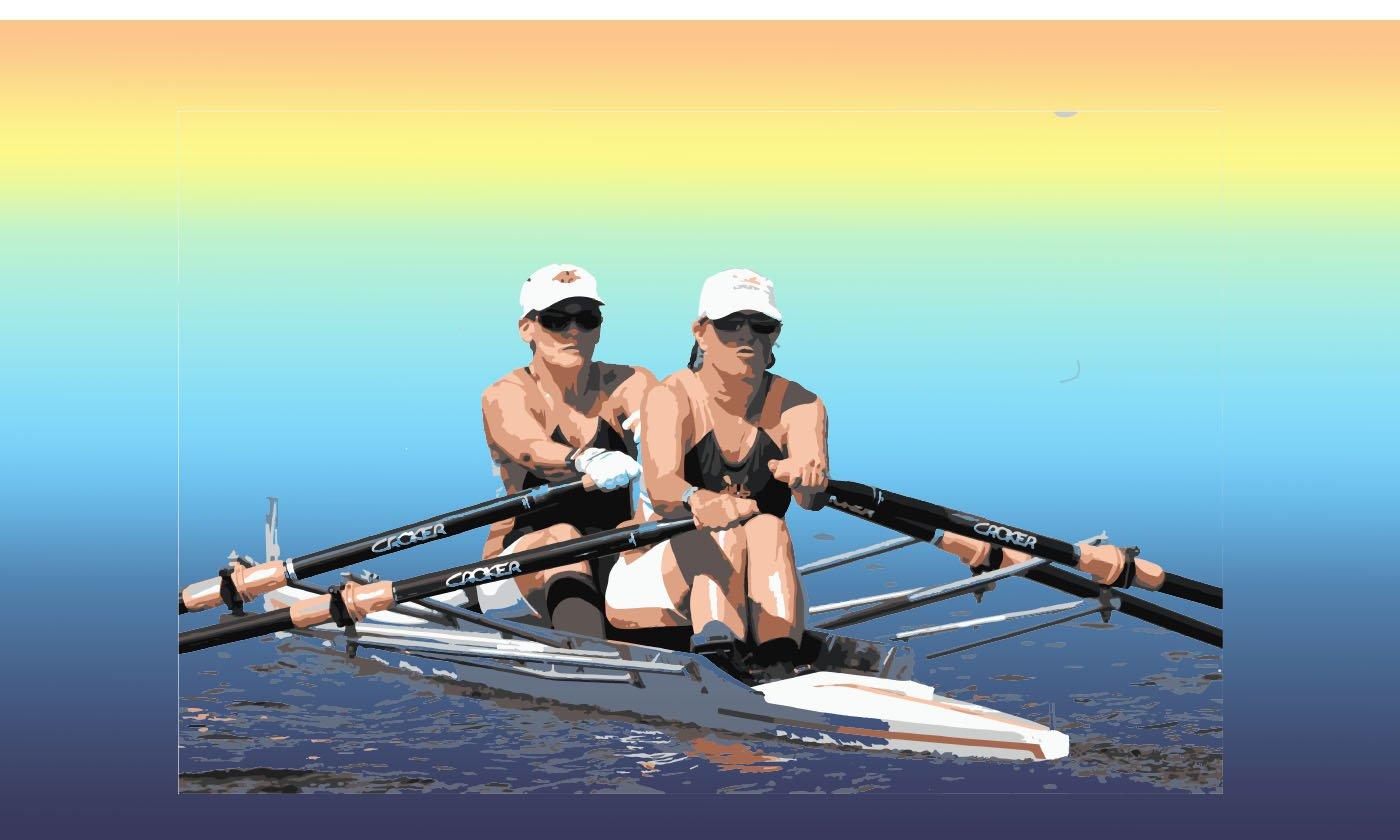 Crew: From dawn till dusk

Three boats float along the San Francisco Bay at 5 a.m. The water is at its calmest and it is so dark that the only lightsource is the surrounding ships and the stars above.

The Bay is completely empty and it is so quiet that you can actually hear the electricity flowing through the telephone wires. Rowers like senior Sabrina Martin and sophomore Finn Callaghan wake up at 4 a.m. several times a week on school days to row as a part of the NorCal Crew team.

4 a.m. – 7 a.m.
After struggling to get out of bed for 10 minutes, Martin makes her way to Redwood City to squeeze in some training before the sun comes up.

“[The team is] basically rowing the entire time on those days,” Martin said. “We’re really trying to pack in as many minutes of just actively rowing as possible.”

Before heading out to the water, the rowers fill their bodies with nutritious snacks for their first breakfast.

According to Callaghan, carbohydrates, protein and healthy fats are necessary to power through practices. A typical breakfast for Callaghan consists of an avocado toast along with three eggs.

“Nutrition is a really big priority in our team,” Martin said. “We constantly have to fuel ourselves just because we have so many practices.”

Callaghan said these pre-sunrise practices tend to be his favorite part of rowing.

“We get out in our boats and we wait for five minutes for the coaches to arrive to the meeting spot. We lay down in the boats and just look at the stars, and it’s so beautiful.Sometimes it feels like you’re dreaming; it’s just insane.”

“It’s dark,” Martin said. “Sometimes I see a shooting star out on the bay.”

Though there are beautiful sunrises involved, this type of training can be strenuous on one’s body.

“[For] morning practices, it’s really crucial you have warm stuff so you don’t get sick,” Callaghan said. “You just need to be prepared for whatever, so I’ll always bring a long sleeve or a jacket, even if I don’t wear it on the water.”

This rigorous morning practice lasts for two hours before the rowers run home for their second breakfast and get ready for school just as their fellow students are waking up.

3:35 p.m. – 7 p.m.
On days with morning practices, the coaches offer optional workouts later in the day, as well.

“Those days, I crash in school, definitely, and sometimes I have to take a nap after school,” Martin said.

When met with a low homework load, however, Martin will sometimes attend the optional workouts to maintain her fitness.

“We have about 16 hours of [required] practice a week, but it’s not uncommon for people to put in another five extra hours on their own. Rowing is super competitive, so if you want to be at the top or be the best boat, then you really have to put in the extra work.”

Here, rowers will either spend the first half of the practice on land with a warm-up workout or just start out on the water.

Callaghan said that he prefers to complete the majority of his weekday homework on Saturday in order to budget his homework time during the week, especially on nights before morning practices.

Weekends
Most weekends come with races against other club teams. During the fall season, this entails 6,000 kilometer competitions, testing the teams’ endurance and cooperation.

As there are sometimes around 40 boats participating in these races, the boats start in intervals, according to Martin.

The incentive is to catch up to the boat ahead even though race times are taken individually.

The coxswain is the team member who sits at the end of the boat facing the rowers, shouting commands to coordinate steering and the rhythm of the rowing. Each spot on the boat has its own role and is best suited for specific types of rowers.

For example, the middle four spots are typically reserved for the strongest members of the team while the bow pair, located next to the coxswain at the back of the boat, and stern pair, located at the front of the boat, require rowers with better technique.

The bowman nearest the coxswain acts as the “stroke,” or the rower who other team members follow for pacing.

Although some may think that the East Coast would house the fastest rowers, Martin said the Bay Area is actually one of the fastest regions in the United States.

“This is the Bay Area—everything here is on steroids—so it’s super competitive around here,” Martin said.

The NorCal team typically sends rowers to the national championship, which changes location each year.

“To qualify for the national championship, you have to compete against the people in your region, so the competition is extra hard around here,” Martin said. “We have some very fast neighbors in Oakland and Marin and Newport.”

In order to train for this competition, the team holds three-hour weekend practices containing workouts on the rowing machines as well as mock races on the water.

The future
As far as recruitment for college goes, Callaghan said he will look into that option when the time comes.

However, since he is 5’9”, which is rather short for a rower, he does not have high expectations.

“One of my big strengths is that I’m really, really fast for my weight, so I’m in the second boat with guys who are 6’3”,” Callaghan said.

A taller rower would have more leverage and power, and is therefore more ideal in the eyes of college coaches, according to Callaghan.

However, since Martin participates in women’s lightweight rowing—for women under 130 pounds—there are limited options for her to row in college.

The NorCal team plans to attend training camps and regional competitions in places like Sacramento, Boston and Seattle this year, in addition to nationals if allowed, according to Martin.

“I love traveling with the team,” Martin said. “It feels like a vacation even though we’re out there to do well and race.”

Positives of crew
Both Martin and Callaghan began their rowing careers with no crew experience  in seventh grade while attending then-Jordan Middle School. According to the NorCal Crew website, anyone can join the novice rowing team, regardless of experience.

“The whole thing started in seventh grade when we were using the rowing machines at Jordan,” Callaghan said. “I was like, ‘I’m good at this. This is the first thing I’m actually good at.’”

Not only does crew encourage a healthy way of living, but it also provides a tight-knit community, according to Martin.

“[Rowing] keeps me fit and motivated. If I had to work out by myself for the rest of my life to stay healthy, I think I would go crazy.”

According to Callaghan, rowing has changed his lifestyle for the better.

Callaghan said, “I wasn’t too sporty as a kid, I was kind of a bigger kid, and my eating habits weren’t great. [Rowing] just kind of changed my personality, and I have made a bunch of friends.”