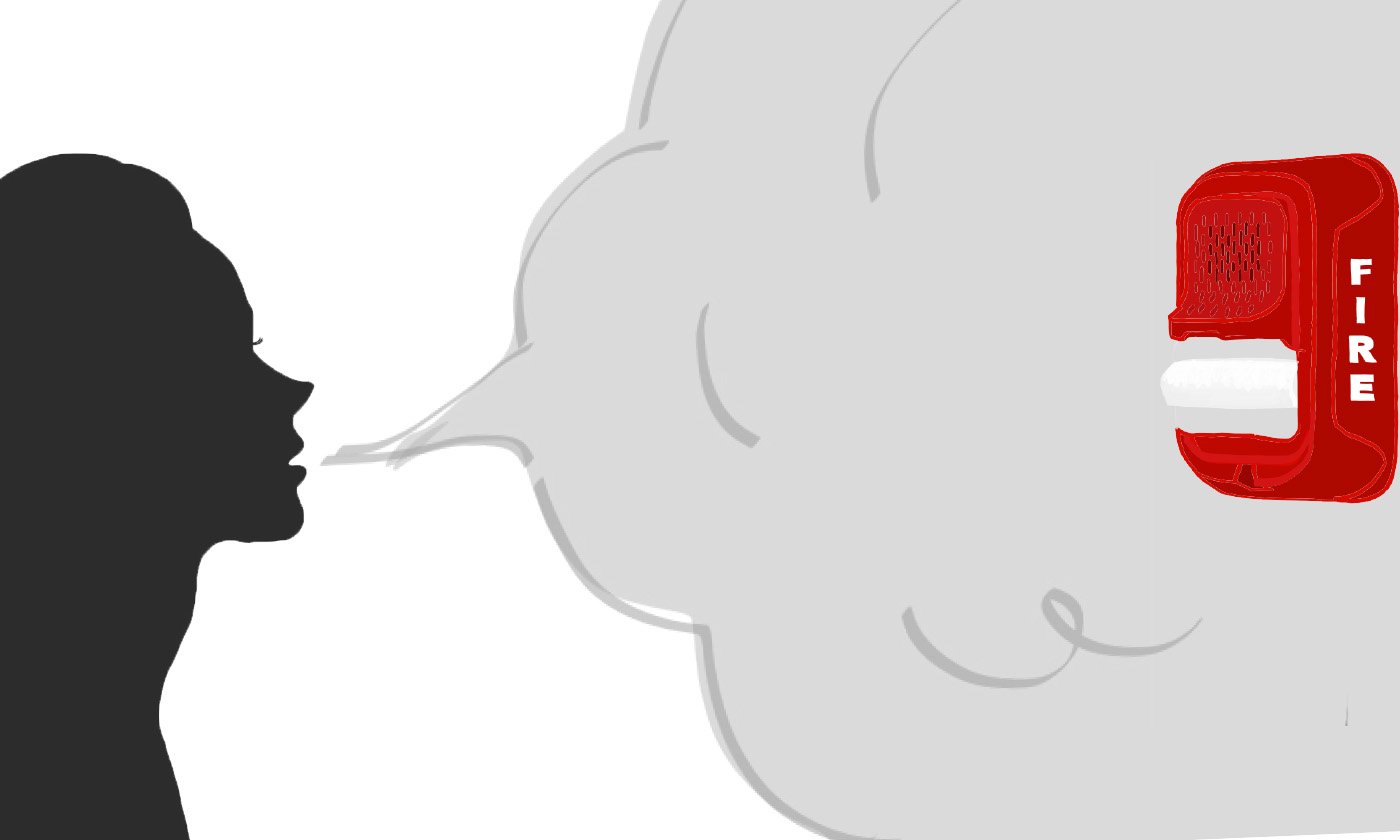 Frequent false alarms, such as the seven set off in August, have made Paly students all too familiar with this required school facility and the following evacuation procedures. Although many students find the repeated fire drills unnecessary, the high school is legally required to promptly notify the fire department to avoid potential fire damage.

According to the International Building Code (IBC) and International Fire Code (IFC), the minimum requirement for a school fire alarm system consists of manual fire alarm boxes throughout the school. In addition, the state of California adopts more stringent codes, which require every room or space on campus to have fire detection devices.

Luis Martinez, who works at Paly Technical support, said that the alarm system at Paly was installed many years ago.

“The alarms have been here for a long time,” Martinez said. “They are passive devices; they are just sitting there until something happens.”

According to Martinez, every building and room at Paly, including the bathrooms, have sensors in them.

“[When]  the sensors recognize a potential danger, they send signals through wires to the sound emitters. [The alarm] cannot be stopped by us unless you cut the wires. Certain people have the right to turn it off, but they must first check that the school is safe from fire.”

Martinez further explained that different  sensors at Paly are triggered in different ways.

According to Martinez, the heat detector most likely will not be tripped unless a real fire occurs, because the temperature required to trip the heat alarm is too high for other causes, making the smoke detector the cause most of the false alarms.

“Our smoke detectors are really sensitive,” Martinez said. “Sometimes they can be tripped by just a cigarette. And even the vaping that people are doing nowadays can produce enough smoke to trip the alarm.”

According to an appliance science story published on Cnet, there are two kinds of smoke detectors: ionizing and photoelectric. According to Martinez, Paly mostly uses ionizing smoke detectors, which consist of two metal plates. One of the plates carries a small amount of radioactive elements, which emits Alpha radiation, knocking electrons off air molecules and ionizing them. These ionized molecules allow electric current to flow between the two metal plates.

However, while there is smoke present in the air, the non-ionizable particles restrict the electric current flow, which trips the alarm.

“Ionizing detectors are very sensitive,” Paly chemistry teacher Samuel Howles-Banerji said. “That is why they are more prone to false alarms.”

According to Howles-Banerji, ionizing detectors are particularly sensitive to smoke and  other matter such as water vapor, produced by vaping. However, Howles-Banerji thinks this sensitivity is necessary for a school fire alarm system.

“[Smoke detectors] are designed to be so sensitive that a small amount of smoke can trip them because a severe flaming fire may not produce as much smoke,” Howles-Banerji said.

According to Howles-Banerji, the smoke that people see from fires is combustible matter that is not fully burned, and thus disperses into the air. This is why smaller fires tend to have more smoke.

However, when a blazing fire is severe enough, all combustible materials are burned thoroughly, and thus very little smoke is produced.

Howles-Banerji said, “The problem is, the hotter the fire is, the more [damage] it [causes] and the faster it can spread, so you want to be able to detect those sooner, which is why I think it will probably be better to have those more sensitive [detectors].”

Who sets off false fire alarms?

Each time the fire alarm goes off, irritated students of Palo Alto High School file out towards the football field and proceed to line up behind their teachers under the scorching sun. Though all of the students are much too familiar with this inconvenience, few consider the perspectives of the individuals responsible for setting off the alarms. Three of these individuals shared different motivations and consequences.

Jane, whose name, as well as all other students in this story has been changed to protect their identities, is a typical Paly sophomore in nearly all aspects. However, she is one of the students responsible for triggering one of the fire alarms that have been occurring almost weekly since the beginning of the academic school year.

On the day she set off the alarm, Jane was going through her normal school day routine when her sixth period class seemed like it was passing by more slowly than usual.

“That day, I was really bored in class and I wanted to know what it was like to be in that situation,” Jane said. “People say that [setting off the alarm] is really fun so I kinda just gave it a shot.”

According to Jane she does not plan on repeating this incident. Once caught, she was suspended for two days and had to attend court.

Jane further explains how, she was called into the office by Assistant Principal Jerry Berkson, who asked her about the incident and then proceeded to ask her to write a statement for the school resource officer.

“After I talked to Mr. Berkson, I had to talk to a lawyer who explained the whole court process to me and how I would be receiving something in the mail, and what charges I would be facing. I recently got the paper in the mail and it said that I have to wait for the probation office to call me and sign the paper for probation and court.”

According to Jane, she holds many thoughts about her experience with fire alarms.

“This experience was cool in some ways, but if my mom gets charged [with the fine] then I will regret doing it,” Jane said. “This is definitely not an experience I would like to ever be in again.”

According to Berkson, deliberately setting off a false fire alarm is a citable offense. Additionally, if the school believes someone intentionally set the alarm off, they will call the police, who will take over from there, as it is a legal issue.

In contrast, Paly junior Al has managed to dodge the consequences and aftermath of pulling the alarm despite threats of steep fines and suspension. Thus, Al expresses no guilt for his actions.

“I have [intentionally] set the alarm off about four times in all of my high school career and have never been caught,” Al said. “It sucks though because [admin] just [monitors] me more.”

Al attributes many of the false fire alarms to students vaping in the bathrooms, without a particular goal of setting the alarm off.

“I’ve been around people setting off the alarms many times and it’s always people smoking wax pens and taking too many hits and like ‘hotboxing’ the bathrooms too much and then the alarm goes off,” Al said.

‘Hotboxing’ refers to concentrating an enclosed area with smoke so that the people inside are continually inhaling said substance.

As most students and staff at Paly know, there is a large problem with vaping in the bathroom. However, according to Al, these “juul sessions” provide more of a purpose than just vaping.

“I’ve met lots of people through being in the bathrooms and people in there smoking [and] juuling,” Al said.

According to junior Zoe, she accidentally set the fire alarm off with her waxpen. She recounts that she went to the bathroom in the Media Arts Center (MAC) one morning during her second period class.

“Setting the alarm off benefited me since it gave me something to do,” Zoe said. “I’m sure there were other students in similar situations as me that were probably also happy it went off, but there were also probably some that were taking tests and got upset by the interruption.”

Though this issue is humourous to some students at Paly, it has detrimental effects to daily student life.

“I was not caught, but I regret having disrupted students taking tests and having costed the district a vast amount of money,” Zoe said. “I wouldn’t do it again, at least not intentionally.”

According to Principal Adam Paulson, another growing concern among admin is the level of safety within the community.

“When a fire alarm is triggered, a fire truck is always immediately dispatched with a team of firefighters – and that is exactly how we want them to respond to an alarm coming from the school. When it’s a false alarm we are taking life-saving resources from community members who may have an actual emergency.”

Administration showed a lot of concern, and worked hard to combat the issue. The first step admin took was locking the 800s, 1700s and 100s building bathrooms during class time, only opening them for 10 minutes halfway through the period.

According to Paulson, the goal of this action was to check bathroom sensors and see how well they are diagnosing smoke, specifically in bathrooms that had been main sources of the false alarms. The bathrooms were reopened on Oct. 11.

According to Berkson, admin is working on getting vape sensors that will be tested in the bathrooms that are main sources of alarms

Another approach admin has taken is to inform students of the effects of vaping through posters designed by the Food and Drug Administration (FDA) which will be placed in bathroom stalls.

Berkson said, “It is my belief that vaping is the root cause of this issue. Hopefully with the posters, students will think twice about juuling.”