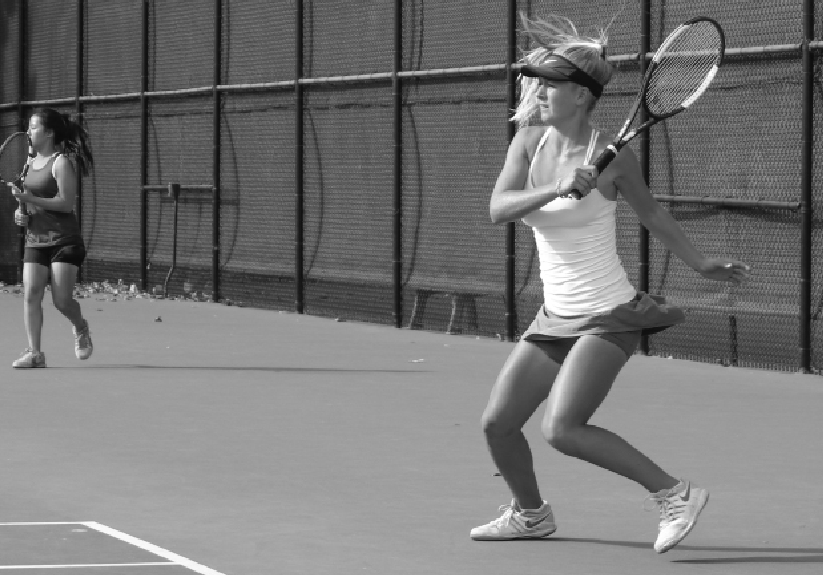 In a doubles match against Homestead, sophomore Maddi Page hits a pass back to her competitor.

After facing some tough losses and tie break situations, the Paly girls’ varsity tennis team has continued to stay dedicated and motivated as the season progresses.

“At the end of the day, we just have to mature and become more mentally tough so we can handle the higher pressure moments better.”

Citing frequent ties as a main source of the team’s past losses, sophomore captain Maddi Page weighs in on the team’s progress.

“We’re one of the younger teams in the Central Coast Section (CCS), and it’s hard to beat experience.”

According to Page, the competition this season is unusually tough,  and Paly’s young varsity team is not yet used to the intensity of high-stake matches and tie-break ends.

“The league is super high-end this season, with an unusual number of [probable] future college players,” Page said. “As a team, we haven’t dealt well with the pressure that comes with tie-breaks.”

As the season continues on, the team plans to buckle down and focus on remaining consistent and resilient.

With both victories and losses under their belt, the team has learned what they need to work on and where they can improve.

“At the end of the day, we just have to mature and become more mentally tough so we can handle the higher pressure moments better,” Page said. “Next year, we will be older and hopefully win more tie-breaks.”

According to Page, the team hopes to be prepared for CCS championships and to beat crosstown rival, Gunn High School in the upcoming weeks of the season.

As the team approaches their next matches, they’ve intensified  their practice schedule.

“To prepare for matches, we have mandatory team practice on Wednesday,” Page said.

According to Page, the team holds two-hour practices per week.

With the exception of Wednesday, the practices are not mandatory.

However, she admits that there can only be so much accomplished through teamwork and group practices.

“Additionally, most of the girls have private coaches and training since at the end of the day tennis is an individual sport.” Page said.

Its next game will be against Gunn High School on Oct. 24.