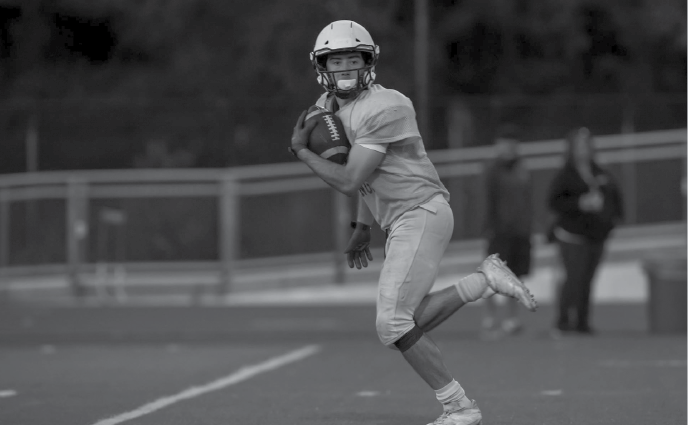 Of all the students at Palo Alto High School, over 1,200 participated in at least one sport last year. However, according to Athletic Director, Therren Wilburn, only two stand-alone Vikings currently compete in three school sports. Participating in one sport each season, these athletes don’t have any days off.

Senior Paul Thie is used to the rigor of everyday practices and weekly games; he grew up with sports as the main part of his life.

“I have been playing soccer and baseball the longest,” Thie said. “I started when I was around six. I played American Youth Soccer Organization (AYSO) until I was about nine, then I started to play club soccer.”

Participating in football, soccer and baseball every year since ninth grade has brought new competition, different priorities and a new sport into Thie’s life.

Going into freshman year, tackle football was new to Thie, as his parents hadn’t let him play the high contact sport when he was younger.

Now easily recognizable as number 11 under the Friday night lights, Thie was pulled up from junior varsity to varsity football for the playoffs his sophomore year.

Another key player of the varsity football team is senior linebacker Wes Walters. Along with playing football in the fall, Walters plays basketball in the winter and lacrosse in the spring.

Walters said he favors the fall grind of football for its strong team bond and the close relationships he has with his teammates. As football continues its best record of the last five years and basketball finishing close to a state-title its last two seasons, Walters highlights that the time on a team isn’t only playing together, but succeeding together.

Playing sports year-round makes time management a critical aspect of the athletes’ lives. Balancing school work, sports and a social life can be a struggle, according to Thie. Thie said this struggle is especially strenuous during the fall, when football practices run later and games fill up every Friday.

These extra long hours even cut into the next season. Going into a new season of sports, even before tryouts start, many teams have preseason trainings, open gyms or workouts. However, as they are finishing off their seasons of the previous sport, Thie and Walters often miss this critical period of the preseason for the next sport.

Aside from football preseason, which runs throughout the summer, Thie is forced to miss preseason training and large parts of the tryouts for soccer and baseball.

Between the fall and the winter, football’s Central Coast Section competition has interfered with soccer tryouts.

“I only had two days to tryout [last year],” Thie said. “This put a lot of pressure on me to perform.”

The same situation occurred between the winter and the spring, as Thie transitioned from the soccer season to baseball season.

“It was the same deal — I only had a couple of days to tryout for the team because of how late the soccer season went,” Thie said. “It’s hard to get used to this because I literally don’t even have one day to rest.”

Despite having no rest days, competing year round has its upsides. When picking a favorite season of play, Thie couldn’t just choose one.

According to Thie, competing in three different sports throughout the year only drives him to improve his performance.

Thie said, “Competing year round gives me a constant challenge to try and beat kids that only play that one sport the entire year. [Playing three sports] gives me less time to focus on each one, so going up against kids that play year round is a lot of fun.”