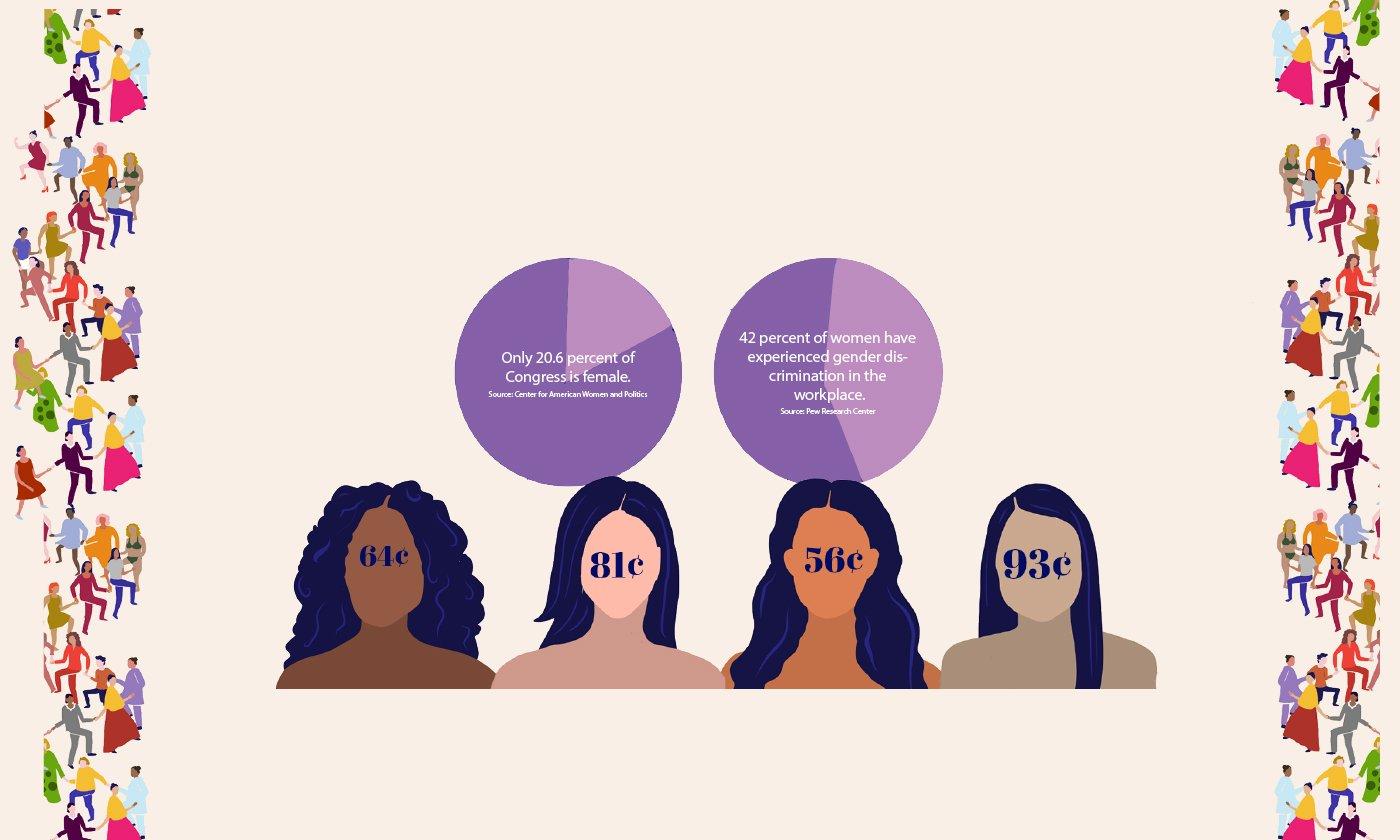 Frida Rivera and Lucy Nemerov
Uncategorized
December 7, 2018
Has anything changed?

Feminism. To some people, it’s a dirty word. To others, it’s an integral part of identity. Does it mean “man-haters”? Or does it mean “empowerment”?

Some people say it’s out-dated, and others criticize it for focusing too much on first world concerns.

However, feminists say it can never be out-dated because equality has not yet been won, and the fight for equality for women concerns all women, in both the United States and around the world.

Yet, the feminist movement in the U.S. has come under criticism for being dominated by white women.

The drive for a more inclusive movement and for a broader definition of central issues has grown in recent years, as black, Latino and Asian-American movements have sought a seat at the feminist table.

It wasn’t all that long ago that women could even consider having a political voice in the U.S. The right to vote came in 1920, with the ratification of the 19th Amendment to the Constitution.

Suffragettes built their part of the feminist movement on the ground plowed by American women starting in 1848, when women gathered at the Seneca Falls Conference to discuss equity in social, civil and religious spheres.

Many of these problems are relevant to all women, of any race, ethnicity or religion. However, the feminist movement also is realizing that other concerns of specific racial, ethnic or religious groups overlap with feminist issues and present an opportunity to tackle problems on a broader front.

Junior Emma Donelly-Higgins, president of the Paly Feminism Club, advocates for the inclusion of all racial identities in the feminist movement in both her role as a club leader and a frequent attendent of women’s rights protests. Donelly-Higgins said it’s important to understand the difference between White and Intersectional Feminism.

“Intersectional Feminism is a branch of feminism that emcompasses women of varying economic, religious and racial identities, whereas White Feminism seems to only play to the advantage of prosperous white women,” Donelly-Higgins said.

The Bay Area is home to many women’s groups voicing the importance of Intersectional Feminism.

For example, The Women’s Building, a center founded in 1979 by a group of lesbian women and women of color who did not feel welcomed at other women’s centers in San Francisco. The center provides social services and works with non-profits in order to promote women’s movements in the area.

Founded in 1979, The Women’s Building is a community center that focuses on empowering, enriching and engaging women in the feminist movement.

Vylma Ortiz, an advocacy specialist at the San Francisco The Women’s Building, said she focuses on helping women who face sexual assault and harassment in addition to  promoting movements such as #MeToo.

“I think everyone’s welcome in the movement, but many times, the standard is coming from a white lens,” Ortiz said. “People forget that there are Native, black, LatinX and disabled women. Not everyone is the standard white woman.”

Arianna Mao, a junior Asian-American leader in the Paly Feminist club, said the importance of Intersectional Feminism lies in the new perspective it brings to the feminist movement.

“It’s really important to look through the lens of how it affects different sects of women,” Mao said. “Not just focusing on one group of women specifically, but looking at several layers of the problem. For example, looking at what problems affect a woman in a lower social class or of a different race can really broaden your view on the feminist community.”

Donelly-Higgens said she sees Intersectional Feminism as an opportunity to stand with all women while still allowing women of color to lead their own movements.

“I don’t think it’s necessarily about helping women of color — it’s more standing in solidarity with women of color. It’s so important to speak for women of color and people of color in general. They are the leaders of their own movement.”

Paly sophomore Isabella Koutsoyannis, a Mexican-American female in the Social Justice Pathway, said she is thankful for the effects of feminism on the Latino community.

“I appreciate anyone supporting the feminist movement no matter what race they are,” Koutsoyannis said. “Whether that means you are black, Asian, white or any other race, we are all fighting for the same goals.”

Koutsoyannis said she has seen the negative effects when feminists turn against other feminists.

“I hear people sometimes bashing ‘White Feminism,’ but in my opinion, attacking each other distracts from the other problems at hand,” Koutsoyannis said.

No movement for social justice can progress without backlash, and as an outspoken advocate for women’s rights, Donelly-Higgins is no stranger to retaliation, especially from men.

“I’m really outwardly feminist and liberal, and I’ve noticed a lot of guys, either behind my back or to my face, will call me crazy,” Donelly-Higgins said.

Acknowledging the accusation that her views are ‘radical’, Donelly-Higgins said, “You have to be crazy to believe in this sort of thing because it’s crazy, and it’s something different. If you want equity, you are believing in an extremely progressive society, which is nothing like we have right now.”

Another common misconception within the feminist movement is that all women experience sexism and discrimination in the same way.

According to Ortiz, it is not that one sub-group faces objectively worse discrimination than another, rather, that their experiences differ.

“The different levels of privilege that women have either alleviate or exacerbate the problems of sexism and misogyny.”

Despite being a prominent leader in the Paly feminist community, Donelly-Higgins said she does not want to problem-solve on the behalf of women who experience inequalities that she does not face.

“I am not a woman of color, so I can never truly know how the problem affects women of color and what the best solution would be,” Donelly-Higgins said. “Only women of color do. However, this is in no way an excuse to stay silent on the issue, therefore being complicit. Consult your friends of color and listen with open ears. Elevate their voices.”

Intersection between culture and feminism

From the age of 12, Paly senior Noor Navaid has made room in her morning routine for an additional item of clothing: a hijab.

Attending an Islamic school in the Bay Area at that age, Navaid was often surrounded by girls doing the same.

According to Navaid, the commitment to a hijab is a big one. Along with draping a scarf over her hair, Navaid also has to cover her legs and her arms up to her elbow.

“Making the decision to wear a hijab was huge,” Navaid said. “But it is a daily reminder of who I am and what my values are, and it feels like a connection to God and a connection to religion.”

According to Navaid, the Islamic faith is rapidly changing and adapting to societal changes and her Islamic faith as well as her hijab are contributors to her feminist ideals.

“I think that the reasoning behind the hijab is not the same in the 21st century as it used to be,” Navaid said. “To me, the wearing of a hijab is a form of equaling women. Back in the day, slave women would not wear hijabs, but modest women would, which was a sign of respect and was equalizing for women and men.”

According to Navaid, a verse from the Quran gives a good insight into the Islamic concept of gender, social and racial equality: “O mankind, indeed, We have created you from male and female and made you peoples and tribes that you may know one another. Indeed, the most noble of you in the sight of Allah is the most righteous of you. Indeed, Allah is Knowing and Acquainted,” (49:13).

“Basically, this verse is saying that you’ve been created as men and women, but the best of you are the ones who do the most good in the world,” Navaid said. “In Islam, being a caretaker or mother is a very special type of love and is very respected. The Quran never says that women aren’t supposed to work, and instead women are expected to be educated, being the foundation of a family, biologically.”

According to Navaid, using her religious attire as a form of empowerment and connection to her religion is something she holds dear.

“My favorite thing about my hijab is that it removes the focus away from physical appearance of a woman and more on their personality and humanity. I find that the society is too focused on defining standards of beauty for women, and conforming to those standards can be oppressive to many women.”

Although Navaid made the personal choice to wear a hijab, some women are pressured to dress in a certain way based on cultural tradition.

Wearing ripped jeans and a crop top, Paly junior Esther Kagiri dresses in the typical attire of a Palo Alto teen. Kagiri recalls changing her attire when she moved here from Kenya.

“Depending on what your tribe and parents are like in Kenya, teens will either wear miniskirts and showy clothes,” Kagiri said. “Then there are others who dress very covered, like me, where I used wear a turtleneck and leggings under a dress.”

For Kagiri, the largest influence on her way of dressing was her mother.

“My mom really wanted me to present myself in a respectable way, which reflects on both me and her,” Kagiri said.

According to Kagiri, her father’s attitude towards her choice of clothing has changed.

“After having lived in the United States for many years, my dad has seen what people wear here and is now much more flexible in what I wear, unlike my mom.”

Some people think the feminist movement has become unnecessary or a crusade against the male sex.

“Feminism was important in the 1900s, not anymore,” junior Jackson Druker said. “It was important for the the 19th Amendment and getting women to be treated with more respect in the workplace, the field of education and in the civil rights movement.”

As a conservative, Druker stands out in Paly’s mostly liberal student body.

In Druker’s eyes, the feminist movement has been twisted into an excuse to demonize men, and its purpose is no longer clear or necessary.

“I feel like it’s become more of a misandrist movement that is attempting to blame all faults of society on men, which is why I don’t consider myself a feminist,” Druker said. “I think that it has become something that it wasn’t supposed to be. It turned something that was once useful into not what it used to be.”

According to Mao, there are members of the feminist movement who are misguided in their definition of feminism. However, that group is a small minority, she said.

“Of course, there are going to be some people in the feminist movement who are more radical and are demonizing men, but the whole point is looking for equity for all genders.”

Druker said he bases his argument off his interpretation of the Constitution.

According to him, the document outlines the positive state of equality between different groups in present-day America.

But, according to Mao, although the Constitution outlines equality between men and women, there are still many institutional inequalities that cannot be dismissed.

“To bring up the wage gap, for example, you can compare white women to white men, and there’s a significant difference,” Mao said. “But then if you compare Latina women, it’s much worse.”

Although Druker is anti-feminist, he objects to being labelled as anti-women’s rights and dismisses such stereotypes about conservative men.

Druker said, “many people say conservatives are misogynistic, which means by definition, the hatred towards women. Feminists see individuals in the conservative community who are outspoken and assume that their opinions speak for everyone. There are definitely misogynistic and sexist people. People in the feminist movement are singling out those people and generalizing our whole group as those people.”