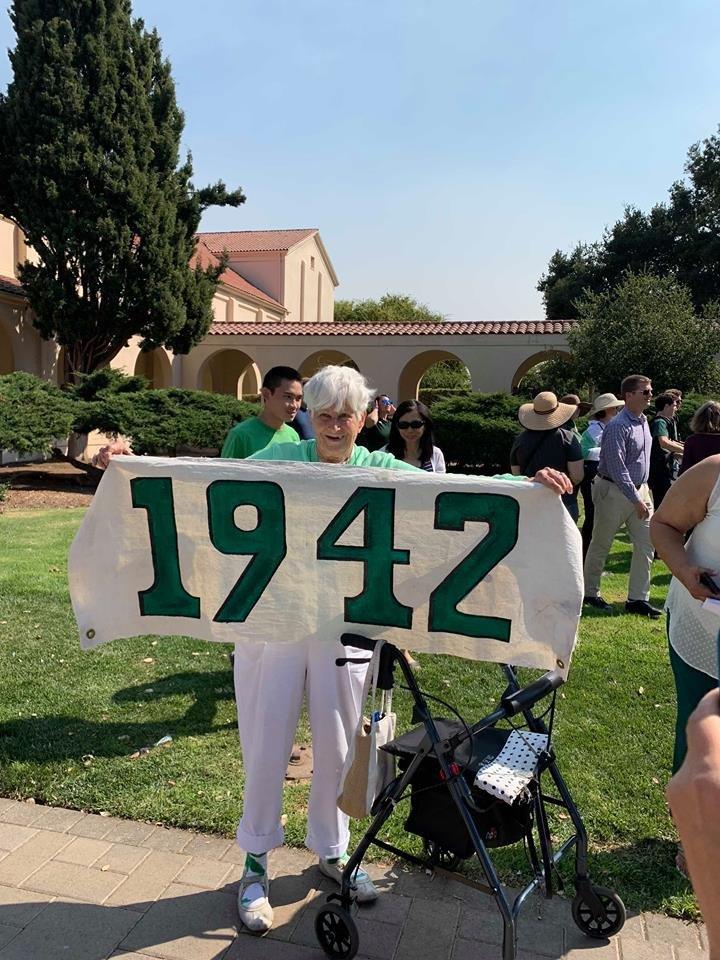 To celebrate 100 years of the current Palo Alto High School location, the Paly Centennial Committee collaborated with the Palo Alto Historical Association to host a community march and photo reenactment followed by a celebratory program on Oct. 7.

The Paly Dance Team lead the Centennial March, followed by the Paly Cheer Team and Paly Band. A  mass of Paly alumni, students, parents, faculty and several community members trailed closely behind. Paly Librarian Rachel Kellerman, a member of the Centennial Committee, had been advertising the event to numerous classrooms throughout the week.

“Everybody showed up and it was a nice mix of generations with new student leaders and former student leaders. I’m really happy about the way it turned out.”

Cheering echoed through the streets of Palo Alto as marchers made their way to the new Paly site.

“The energy of the crowd made it very exciting,” sophomore dancer Azalea Wakelee said. “I feel very special and honored that we got to be leading this celebration.”

Once the cluster reached the Paly campus, the Centennial Committee ushered all participants into a large group to recreate a monumental photo from the opening of the new campus in 1918. Within the rows of people setting up for the group photo, several smiling Paly alumni held green and white banners with their graduation years neatly drawn on them. Among the crowd were several Paly alumni who were recognized as examples of the ideals that Paly still holds today, according to Kellerman.

“This week has been so much fun — especially having our Paly class reunion last night — it’s been a flurry of Paly memories,” Assemblyman and Paly alumni and California Assemblyman Marc Berman, one of the speakers at the ceremony, said. “Some of my high school friends are still my best friends today, and it’s just great to see so many people share their fondest Paly memories.”

Once the photo was taken outside of the Tower Building, the attendees entered the Performing Arts Center to enjoy a ceremony.

The ceremony consisted of several performances from the Paly choir, band and staff and honored pioneers who are remembered for their significant imprints on Paly during their time. Among these people were Mary Gordon, honored for her architectural vigor benefitting the Paly campus, and Anna Probst Zschokke, one of the first residents of Palo Alto, who the committee honored by unveiling a plaque denoting her foundership of the school.

“It’s truly an honor to be part of the centennial class,” Paly Board Representative senior Caroline Furrier said. “It’s a very significant historical event that I am proud to be a part of because I love our school pride and the turnout was truly inspiring.”

The Centennial festivities will continue throughout the year by honoring the Paly campus and its influential people.