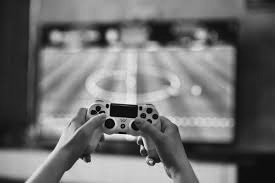 Nearly every 21st-century student has played a video game. Video games are the national craze and part of a billion dollar industry in America. Whether students play with their friends for fun or on competitive e-sports teams, it’s no surprise video games are the subject of addiction.

In a recent study conducted at the Pew Research Center in Washington D.C., researchers found nearly all American youth play a video game of some sort. Across the world, around 1.2 billion people play video games, which is approximately one-seventh of the world’s population.

When looking at video games, one may wonder how the addictive nature starts. According to Paly Wellness Center Coordinator Elizabeth Spector, addiction can stem from a multitude of reasons.

Many Paly students said that they first started playing video games in elementary school. It was at that time that electronics emerged as a new form of entertainment for all. Platforms including Wii, Nintendo DS and Xbox rounded out this new past time.

Games such as Fortnite and Grand Theft Auto allow players to wear a headset and engage verbally with other players during the game, using gaming as a form of socializing as opposed to speaking in-person.  Freshman Alex Born enjoys playing with friends after school.

“I game because I enjoy playing with friends and putting time into a game to improve.”

According to a survey done at the Kaiser Family Foundation in 2015, children spend around 50 hours a week looking at a screen. To many, this may be considered an excessive amount of time. So when do screen time and video games become too much?

In June 2018, the World Health Organization (WHO) recognized “gaming disorder” as a mental health condition. The condition would have behaviors like gaming taking precedence over other activities despite negative consequences, such as playing instead of studying for a test. The disorder affects a teenager’s inability to differentiate enjoyment  versus addiction for the activity. Professor Anna Lembke of Psychiatry and Behavioral Sciences at  Stanford University explains how the brain reacts to addiction.

“The brain adapts to the effects of the stimulus, such that the addicted person continues to need more and more of the substance to get the same effect, craves the substance when they’re not using, and is no longer able to enjoy ‘natural rewards,” Lembke said.Most adults who are addicted started when they were teenagers according to Lembke, this suggests that the number of addicted adults in the next generation will only rise.

“I’m concerned that the games can become another thing to do, making other activities overwhelming.”

They offer escapism, an outlet for aggression or adventure. The feeling that these games elicit in a fantastical manner is what gamers may feel they are missing in their real lives, and over time many players resort to games such as Sims and Grand Theft Auto to fill the missing void in their life.

“We all understand that gaming is, in the end, something virtual, an escape from reality, and don’t make it the only future we have,” Benjamin Kong, President of Paly Esports Club said.

Dopamine is a neurotransmitter that offers feelings of happiness and pleasure. It is released when someone is doing something that the system thinks is vital to do. It makes someone want to repeatedly do the action to get more dopamine.

“I will not deny that playing video games does feel good, especially when you’re having a good time with friends,” Kong said

Drugs and addictive behaviors, hijack the dopamine process. Repeated activation of the reward system dulls the receptors; this creates less of a rush, making the gamer play more to get the original feeling.

“That hour you planned to play could turn into three or four,” Kong said. “Anything enjoyable can be addicting, like how that one episode of your favorite show could turn into four or five.”

In many cases of video game addiction, it’s the parents who seek help for their children, knowing they may be missing out on important events of childhood.

“I notice negative behavior change when the screen time is extended,” Bunten said. “It feels like the kid is lethargic from lack of movement.”

Another important factor that affects gamers is the social obligations that come with playing, according to The Economist. Players may feel obliged to help their teammates and friends when they play in games where teamwork is required; using the logic that if other people are still playing the game, they should, too. Many times students use gaming as an incentive.

as motivation to finish my homework,” Born said.

Addiction is something all gamers need to beware of because  it is a possibility for all who play.

Kong said, “Balancing school, family, friends, and gaming can be a struggle, but it’s not impossible.”