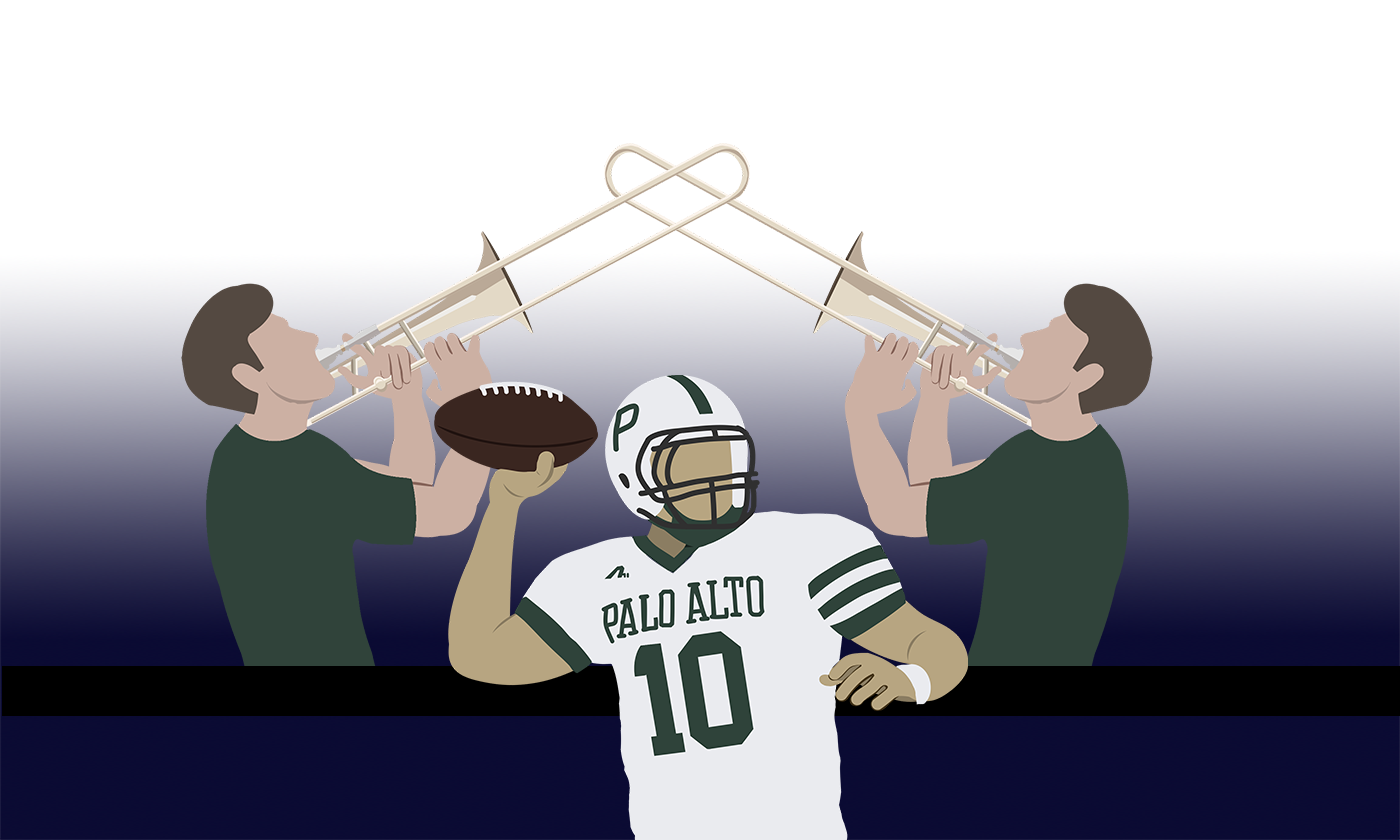 Touchdown! Varsity running back and senior Aiden Chang celebrates with his teammates. The crowd cheers. The stands shake. Chang glances up at the stands, where the band roars, with the blasts of the brass shaking the ground, the tunes of the woodwinds filling the air and the beats of the percussion rocking the stadium. Familiar melodies erupt as the audience and Chang chant along. “P-A-L-O A-L-T-O Paly High, Ah-Schooooooool!”

The worlds of music and sports are not foreign to one another — they intersected long ago, with the ancient Greeks combining musical performances with sporting events at their Olympic games.

However, the tradition of music in tandem with sports has evolved. Today, from collegiate sports bands to the Super Bowl Halftime Show, music makes an appearance at the majority of sporting events.

“There is a whole entertainment package when you talk about any kind of an athletic event, like even if you go to a Warriors game … there’s that beating music that’s going all the time, and it can get people pumped up,” Director of the Concert Band and Symphonic Band Jeff Willner said. “Music enhances the experience of the fans and the team.”

One of the most notable sports that involves music is football. Many colleges and some high schools, including Paly, have bands that play during football games and march on the field during halftime.

The Palo Alto High School Viking Pep Band consists of all members of the two band classes, the Concert Band and Symphonic Band, and has around 130 members. However, the Pep Band has not always been this way.

“(Paly) had had a competitive marching band that was stopped about seven years before I got here,” Willner said. “The couple of years before I came in 2000, all the band did was sit in the stands, and not everybody showed up.”

Willner said when he arrived at Paly, he decided to have the entire band play at afternoon games and make the performances a part of the class. Initially, band members stayed in the stands — Willner set out to change that.

“The very last home game, I said to everyone, ‘Here’s what we’re going to do — we’re going to go out on the track at halftime and play towards the audience instead of just sitting in the stands.’ That’s where it started.”

The Pep Band has since evolved into what the fans and varsity football team see and hear at every home game. The Pep Band, like college bands, performs both a pre-game and halftime show on the track circling the football field. According to Willner, the band has also developed many traditions, including performing its classic kick step during its marching and playing the Monday Night Football Theme at the pre-game.

The Pep Band’s music sparks motivation and energy in players and the audience, according to Chang.

“(The band) hypes (the football team) up, and also brings other students from the student section to join in with the hype,” Chang said. “My favorite part of the band being there would be the chants and the individual songs they play when the football players make big plays.”

According to junior and Pep Band member Ally Kim, classic songs that the Pep Band plays throughout the games include the “Fight Song,” also known as “Green and White,” and “All Right Now.” The band also creates cheers for specific players, including Chang and Paul Jackson III, Paly alumnus and former running back for the varsity football team.

“I love how everyone in the band gets really spirited and wild. Some of the percussion and brass start rhythms and chants that everyone follows, and it’s really fun.”

Furthermore, according to Willner, when the team is on defense and makes a good stop, the band plays the Darth Vader theme. When the team gets a first down, the band will play a snippet of the “Fight Song.”

The audience often also joins in with supporting the team, cheering the team on along with the band. According to Kim, this further enhances the atmosphere, and even allows for friendly, spirited competition.

“The audience really loves when we play, and they always cheer us on. During big games like Homecoming and the first game of the season, where there are lots of seniors in the bleachers, we like to compete with them with spirit chants, like ‘We got spirit, yes we do, we got spirit, how about you!’”

According to Chang, without the lively and encouraging presence of the Pep Band, the game would feel empty.

“For example, when our players score, the band plays a song and the students cheer — it sucks not having that there,” Chang said. “The atmosphere (is) … more flat than when the band is there.”

Varsity football coach Nelson Gifford agrees with Chang and said in an email that the band offers encouraging support to the team.

Gifford said, “I’ve always felt that it’s a great show of community, inclusiveness and diversity that sports can bring. Everyone wants to feel supported and the band being there is a big part of that support … I think music is a big part of athletics in general and the band makes a big contribution in making the environment fun.”