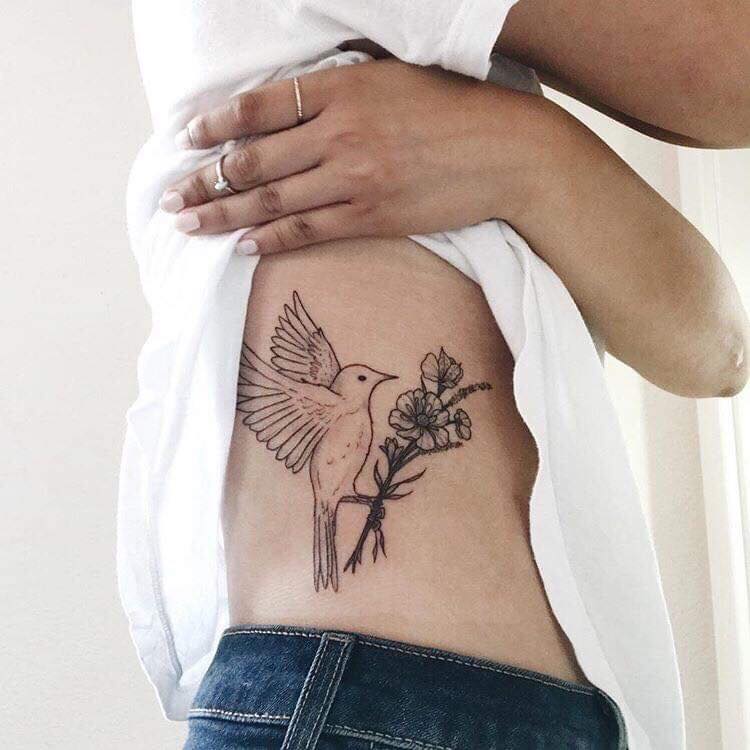 Tattoo body art allows many to express their personalities

It would be easier to ask what isn’t art rather than what is. Boundless in appearance and medium, its physical aspects often serve as the messengers of thoughts and feelings that words alone can’t convey. Whether it’s the simple appreciation of an aesthetically pleasing painting or a deeper emotional impact, art has cemented its place in society as a way to inspire and connect individuals. Therefore, the fact that many would choose to put it on their bodies is no surprise.

Tattoos have been integrated into several cultures around the world for over 5,000 years, receiving a radical increase in mainstream exposure during the 1960s with the invention of the electric tattoo machine. Since then, ink has become common in western fashion and pop culture, rising in popularity especially among young adults.

“I got my first tattoo junior year, I sort of just wanted to do something different and have art on my body (…) I just saw it as a change, like a more extreme version of getting a haircut.”

Wang, who graduated in 2018, has since gotten seven tattoos, including a bird holding flowers on her ribcage and a snake on her left shoulder, both of which she designed herself. Interested in increasing her collection, Wang said there is an addictive quality of getting tattoos.

“If I don’t get (a tattoo) for a long period of time, and I have an idea of the design, it kind of feels like my skin is crawling,” Wang said.

Although body modifications have increased in popularity among young adults over the past couple of years, the stigma surrounding them still remains. 2017 Paly graduate Maddie Lee said there is a negative connotation that sometimes comes with tattoos and those who have them, especially among employers.

“People tend to generalize and stereotype people who are tattooed as being more aggressive or violent, and of course this isn’t true, but I understand why some places may not hire heavily tattooed people,” Lee said. “I don’t agree obviously, but the truth is that people do judge others off of initial impressions and sometimes that reflects poorly on a company.”

According to a 2018 Pew Research Center survey of over 2,000 people, 76 percent thought tattoos and piercings hurt an applicant’s chances of getting hired and 42 percent said visible tattoos are inappropriate at work. The study showed a general correlation between age and tolerance, as the older participants were, the less likely they were to accept tattoos.

Judgement is not only limited to vocational environments, but is also often expressed by family and friends as well. Senior Abby Ramsey, like many students, initially hid her tattoo from her parents for fear of disapproval.

“I wasn’t going to tell them because they don’t support it, but they saw it,” Ramsey said.

Despite the scrutiny tattooed individuals face, adolescents have not been deterred from getting them. In fact, several have observed a decrease in negative reactions and view body modification as a harmless form of expression.

“Oftentimes, corporate environments say ‘no’ to tattoos regardless of what they are,” Wang said. “But I feel like that’s definitely changing, especially with our generation. It’s becoming more widely accepted because people are seeing other people with tattoos who aren’t criminals (…) they’re seeing people with tattoos leading legitimate successful lives.”

However, many young tattoo supporters do have words of caution for those thinking about getting inked up. Given that the process involves puncturing the skin repeatedly, lack of proper equipment, technique or sanitary measures can easily result in not only a disappointing result but also potential infection.

Lee said people considering tattoos should research the artist and tattoo parlor for the safest and most satisfactory results.

“Absolutely do not get a tattoo if you’re under 18, especially if it involves going somewhere sketchy where they accept your fakes or don’t check ID. I would be very worried about the quality and safety of the tattoos … do not stick and poke yourself, as you open yourself up to infections and other health risks.”

Although there are risks that come with tattooing, according to several tattooed students, they can usually be prevented with proper planning and research.

Tattoos offer the freedom to express and concretize what would otherwise be intangible thoughts and emotions, but are unique in their placement on someone’s own body. Wang noted the appeal of being able bring her art with her wherever she goes, which cannot be said for most other mediums.

Wang said, “Remember that it is permanent, so don’t do something that you regret, but also don’t listen too much to what other people say because at the end of the day, it’s your body, and it doesn’t really matter what other people think if it makes you happy.”