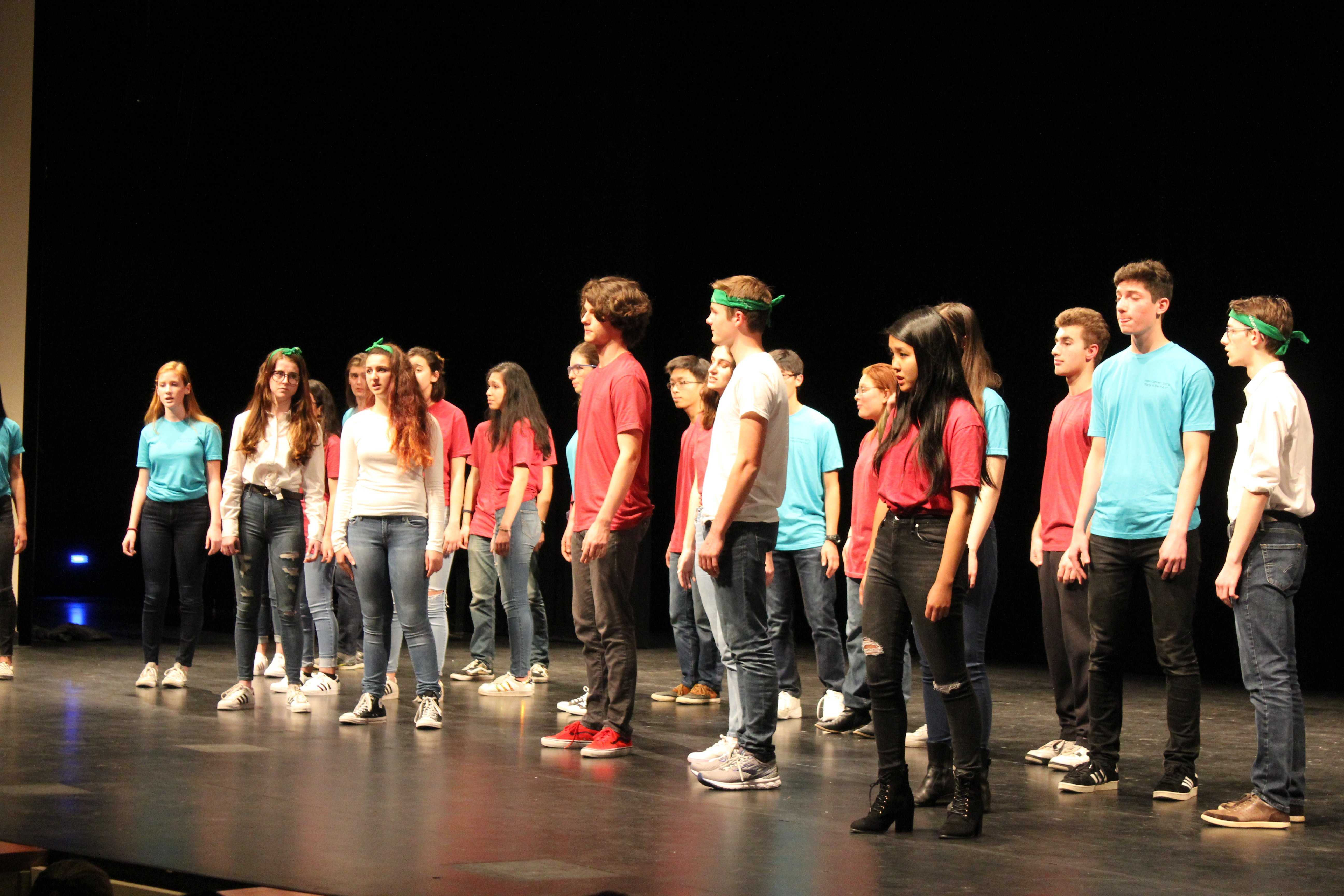 The musical director of the “Pitch Perfect” series and a leader in the a capella singing community made a guest appearance at a special a capella choir concert in the Paly Performing Arts Center on Jan. 29.

Deke Sharon, known as “The Father of Contemporary A Capella,” coached Paly students in master classes during the day and then appeared in the performance in the evening.

Paly’s freshman choir kicked off the free concert with “Hey Ya,” by Outkast. The three PAUSD middle school choirs were featured and performed a joint a capella rendition of “The Climb,” by Miley Cyrus. The concert also included Paly Choir’s AcaFellas, Madrigal Singers, The Heartbeats and more. They performed renditions of favorite contemporary songs such as “No Air,” “Cry Me a River,” and “Toxic.”  Other songs that were performed were arranged by students.

“This was a very special event,” Paly senior Jessica Weiss said.  “He worked with all the groups in Paly Choirs including the a capella groups specifically “We had a concert to show off our works and it was more of a private event, a smaller event. And it was not meant to show a finished result like most of our concerts are but more to give a look inside the process of learning.”

“This was really cool because he held master classes in which he basically would stop us throughout our performance earlier in the day and refine us and refine our work. Honestly, it just gave us a lot of confidence on performing with a lot of emotion and excitement.”

Sharon was invited to appear in the performance because of his fame and accomplishment in the world of a capella music.

“I have worked with him in the past,” Paly Music Theory teacher Michael Najar said. “If you know the father of ‘rockapella,’ it’s like working (with) phones and knowing Steve Jobs.”

Sharon has been performing professionally since he was eight years old, when he toured North America. He is credited with the current sound of modern a capella. He was the music director and arranger for the “Pitch Perfect” series and produced the television series “The Sing-Off,” a worldwide show that was the third-highest rated show on NBC in 2010. “The Sing-Off” is best known as the launching pad of the group Pentatonix.

At the end of the concert, Sharon took questions from the audience and shared how important he feels music is for keeping harmony and bringing the world together. He said he takes it upon himself to spread the happiness that music brings.

“My life’s work is to spread harmony through harmony,” Sharon said. “Not only do I help school groups get started but I also started something called the Contemporary A Capella League, which is for amateur, maybe semi-professional, casual groups, all across the country.”

The League  has grown to include  50 to 70 a capella groups and new groups are starting all the time, he said. He tries to help keep music a part of everyone’s lives by emphasizing his openness and availability to anyone who needs help.

“You can email me now, you can email me 15 years from now. I will answer you because I truly believe our world is a better place when more people are singing and making music.”

Sharon’s upcoming projects include working with DCapella, an international a capella singing group created by Disney.

Another Paly choir concert will be held in the near future, this time accompanied by a full professional band.