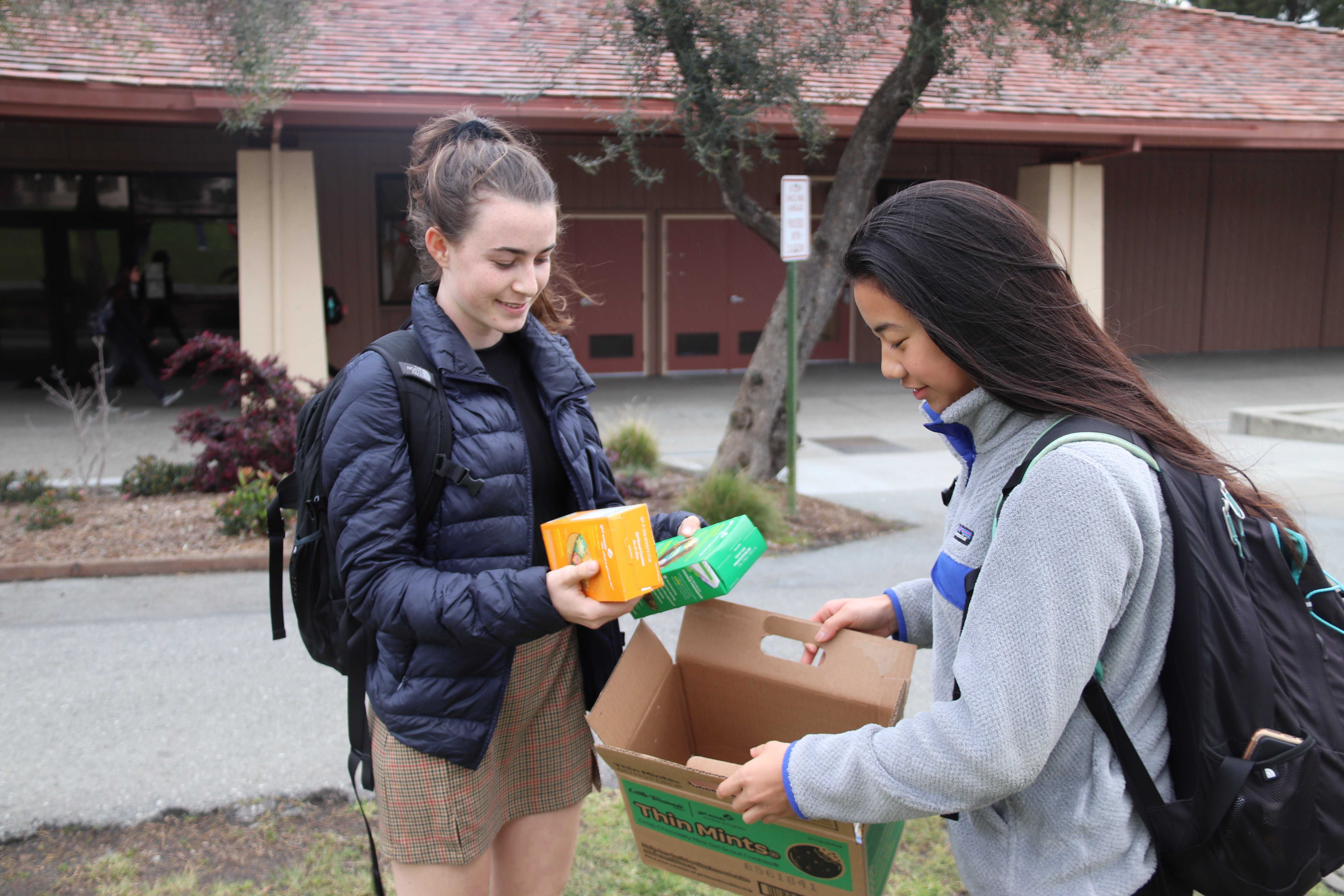 Residents in house after house repeated, “No, thank you” when junior and Girl Scout Sam Pao went door to door selling cookies for her first time in elementary school. Excitement turned into discouragement as Pao found that selling Girl Scout cookies wasn’t as easy as she thought, and she asked her dad who was accompanying her if they could stop.

“My dad encouraged me and told me that rejection is something that I had to accept and I should never stop trying,” Pao said. “I went on and sold more cookies and felt O.K. when I got rejected and was always positive when selling door to door.”

On Jan. 28, 2019, Girl Scout cookie season launched into full swing as Girl Scouts across Palo Alto embarked on their annual mission of selling boxes of popular Girl Scout cookies such Thin Mints and Samoas. Paly students and the local community eagerly searched for those unmistakable cardboard boxes, knowing fully well what lay inside.

Lasting until March, Girl Scout cookie season is the one time of year when consumers can purchase these classic cookies.

Junior Taylor Yamashita has become a regular customer and said she makes sure to purchase Girl Scout cookies each year.

“Usually, my family buys four or five boxes, but it also depends on how many people ask us. I have a few Girl Scout friends that I buy cookies from every year, and I buy them to support my friends.”

From an external perspective, many are unaware of where the proceeds go, but selling cookies acts as a fundraiser for the troops.

According to junior and 12th-year Girl Scout Lavender Legerwood, part of the profit goes to the troop, part of it to the Little Brownie Baker, the company that bakes the cookies, and part to the Girl Scout organization.

“The troop gets to keep between 75 and 80 cents per box of cookies, which is five dollars, and how much in total is added to the troops funds depends on how many cookies the girls sell,” Legerwood said. “The Baker gets around three dollars per box sold, and the Girl Scout organization receives the rest.”

Scouts strive to sell as many boxes as they can in order to raise more money for their troop, which can be used for their group trips, events and more.

“My troop has been raising and saving the money we have earned from cookie sales, garage sales, as well as a few other events we have participated in for a big trip outside the country after senior year,” Legerwood said. “We have been saving up since middle school and are close to (earning) all the money we need for our trip.”

“I do the best at booth sells outside of grocery stores in the afternoons. I also do quite well outside the movie theaters on the weekend in the evenings. However, many others go door to door selling on the spot to neighbors and complete strangers, but the problem with that is that there are so many Girl Scouts in the Bay Area. It seems that every other house has a resident Girl Scout so it becomes difficult to find people that haven’t bought yet.”

Legerwood found that parents can be a useful tool to help sell and advertise cookies.

“Parents are also helpful to take some cookies to their workplaces with a message from the girl to sell to their co-workers. This usually brings in a lot of sales as well.”

Legerwood’s mother, Heather Legerwood has been a troop leader for eight years and looks for a variety of ways to make selling enjoyable for the scouts.

“I try to make selling fun,” Heather said. “In the early years I had the girls collect statements from people refusing to buy cookies. The girls had fun writing down comments and sharing the best rejections. The girls then developed strategies to change the rejections into sales.”

Besides acting as a fundraiser for the troops, Lavender Legerwood said selling cookies helps build valuable life skills and lessons.

“(Selling cookies) encourages the girls selling them to use marketing skills — at a booth, the girls need to be talkative and outgoing in order to bring in and persuade the people around them to buy,” Legerwood said. “Many girls I see selling around town tend to be quiet, so this is helpful for them to gain a voice and take charge. (Handling money also) makes them use their math skills to be able to make and break change, count money to find total profits and more.”

Pao has found other useful skills in selling cookies.

“I used to sell cookies door-to-door and I’ve learned how to deal with rejection as well as how to advertise my cookies in an appealing way,” Pao said.

Trach is part of a troop that was constructed by the Paly Robotics Team. They meet every Friday during the off season of robotics and every day during build season and have a different approach to the traditional troop as they promote females in science, technology, engineering and math (STEM).

“Every year during off season, we go to outreach events and talk to young Girl Scouts about STEM related activities and future jobs. We do outreach in other communities and we mentor some For Inspiration & Recognition of Science & Technology (FIRST) Lego League teams, FIRST Tech Challenge teams and FIRST Robotics Competition teams at elementary and middle schools. We often bring our robot to demonstrate, which allows us to promote the idea of more girls in STEM. We write programs, materials and have our own robotics badges that we send out to young troops in our area.”

Trach finds working with these people to be one of the most rewarding aspects of being a Girl Scout.

On the other hand, Heather said it is most gratifying to see the girls grow as people.

“The best thing about being the troop leader has been watching the girls grow from Daisies, to now Ambassadors,” Heather said. “I have two girls left of the original troop. Others have come and gone but the troop right now have been together since I took over the troop. I still remember teaching them how to strike a match, open a pocket knife, set up a tent, tie knots, stuff their sleeping bag into a sack and build a fire. I have enjoyed every minute. It has been so rewarding be a part of their lives.”