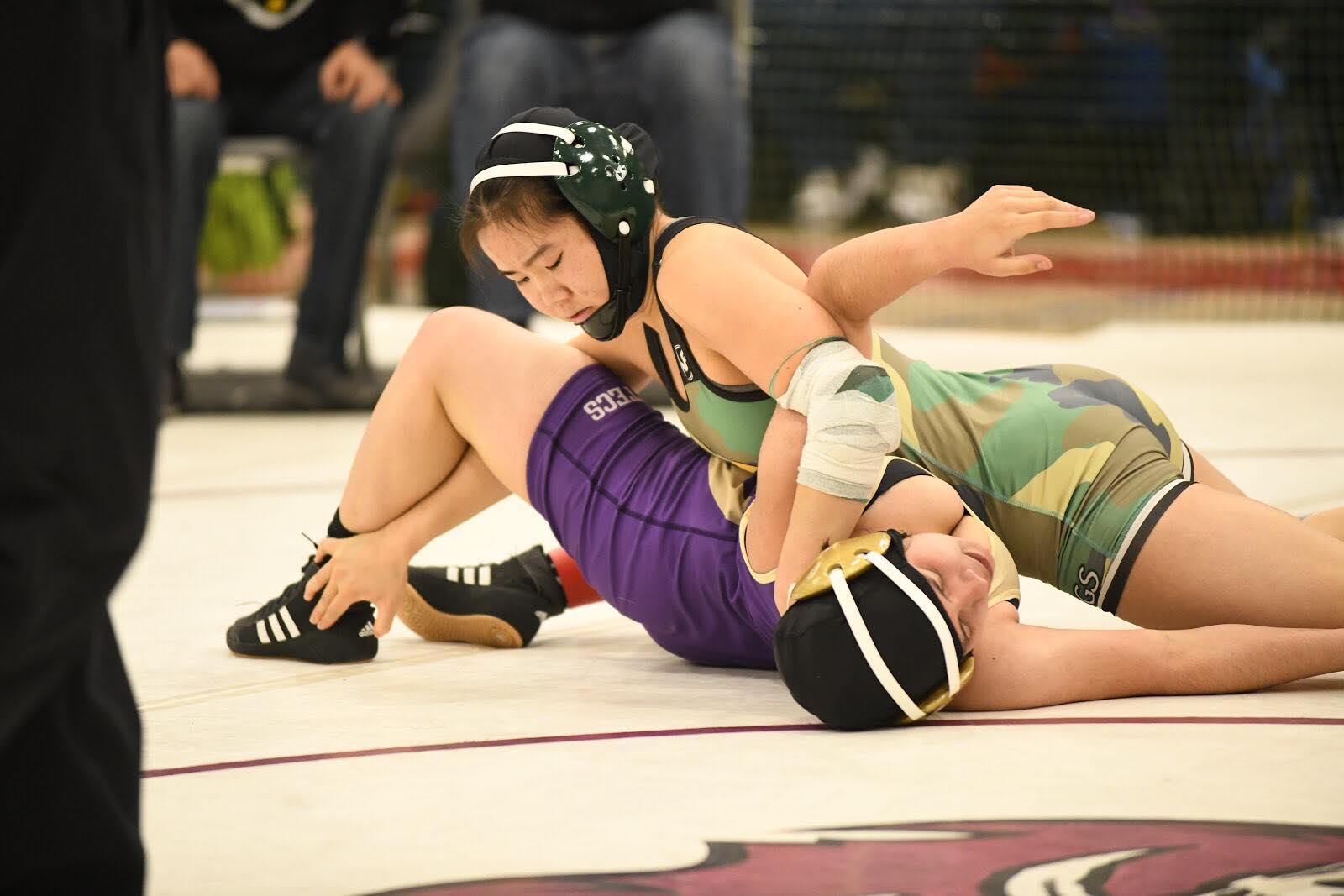 Two opponents enter the ring and stand ready to spar. The silence is broken by the sound of a whistle. One wrestler swiftly takes down the other, gaining an early advantage. The wrestler, junior Zoe Wong-VanHaren calculates her next move quickly to maintain the upper hand.

Meanwhile, at the San Jose dance theater, classical music plays throughout the studio while dancers rehearse for the upcoming show. Among them is sophomore Atticus Scherer, who began his ballet career eight years ago.

Recently, girls have no longer been restricted to ballet leotards, or boys to cleats and baseball bats. More and more students are taking steps toward breaking gender barriers in sports that are traditionally labeled as male or female dominant.

“(A) challenge of competing in a sport that’s male dominant is explaining what it means to be a girl wrestler,” Wong-VanHaren said. “Some people don’t understand that as girls, we still can compete against guys (sometimes, despite generally being in separate categories), and that we still drill with them during practice. We’re not a separate team. However, people are understanding it better now since girls wrestling is becoming more well-known — the male to female ratios are changing.”

Though female wrestlers are becoming more common, there are still difficult aspects for girls competing in male dominant sports.

According senior Masa Perez, a former Paly wrestler, the unequal treatment of girls and boys on the team at the time was one of the the reasons she decided to quit.

“The conflicts were more than what I signed up for. In my opinion,) boys success seemed more rewarded than girls success.”

According to Perez, the unfair environment was partly attributed to the lack of effort put into providing female wrestlers with the competitive experience necessary to succeed.

“(It seemed as though) it wasn’t worth a long drive or not even worth the time to take us (to more competitive girls competitions because), we didn’t have enough girls at that level,” Perez said. “(Not going to competitive girls tournaments was detrimental) because it meant our really good wrestlers wouldn’t get the experience they needed to improve.”

According to Perez, learning to stand up for yourself is crucial, especially as a female athlete in situations where one can easily be pushed around.

“What I want every girl to know before entering our school’s (wrestling) team is the power of advocating for yourself,” Perez said. “I made the mistake of allowing (others)  to dictate my future with that sport.”

Despite the obstacles during her time on the wrestling team, Perez said the community amongst the girls was positive and supportive.

“I can’t speak for this season, but last season I felt like I had sisters,” Perez said. “Even across teams, like at tournaments, you make friends with girls from opposing teams.”

It is likely that girls wrestling will soon become a more common sport as gender barriers begin to fade, according to Wong-VanHaren.

The current wrestling team is structured as a co-ed sport in which students drill together during practice based only on weight, not gender.

Generally, male and female athletes compete in separate categories. However, women can sometimes compete in men’s events to gain extra practice and experience.

“Wrestling is quickly gaining popularity, and as time passes we won’t really think about it being divided by gender anymore,” Wong-VanHaren said. “Our team is co-ed, and that’s what makes it special. We’re not separated, girls and boys, because we don’t have to be. It’s the same for us as it is for them, even if traditionally it’s looked at as a male sport.”

While wrestling is often labeled as a male sport, dance is traditionally viewed as a female dominated sport. However, according to Scherer, seeing men step onto the stage is not uncommon. In fact, being a male in dance can actually be an advantage in some ways.

“In dance, the field may be dominated by women, but since the number of male dancers (is low), it gives (men) an advantage in getting into companies and programs.”

According to Scherer, the dominance of females in dance could create reluctance for men to join.

“The reason why men are becoming less interested in dance, especially straight men, is because many find it too feminine,” Scherer said. “I think overcoming this has been great for me, but that’s also in (my being gay). (It is difficult to get) more men interested in dance, a sport so heavily dominated by women.”

“I personally think (the scholarships for boys at my studio) are great and that it encourages young boys to dance (and participate in a sport) that really needs more men,” Scherer said.

In contrast to wrestling, dance often provides the upper hand to the underrepresented gender.

Low male participation in dance is the result of socially acceptable norms surrounding masculinity, many of which may cause men to view the sport as too feminine.

Similar to dance, figure skating is a sport that lacks male participants.

According to senior David Foster, who began figure skating at a young age, each year he noticed more and more boys begin to leave.

“When I was little there were a lot of boys (in ice skating), but every year there were fewer and fewer until I was the only one left,” Foster said.

The low number of boys participating in figure skating closes the door to some opportunities for them such as being on a drill team and joining certain classes, according to Foster.

“At least at Winter Lodge where I skate, some things are restricted to only girls because there are so few boys,” Foster said. “It would be cool to have those opportunities as well, and that is something you don’t get as a boy in ice skating.”

Although figure skating is generally viewed as a female sport, it is common to see male figure skaters compete and do well in the Olympics, according to Foster.

Foster said, “The moves are hard and require a lot of work and commitment. I think that’s something that a lot of people don’t realize.”