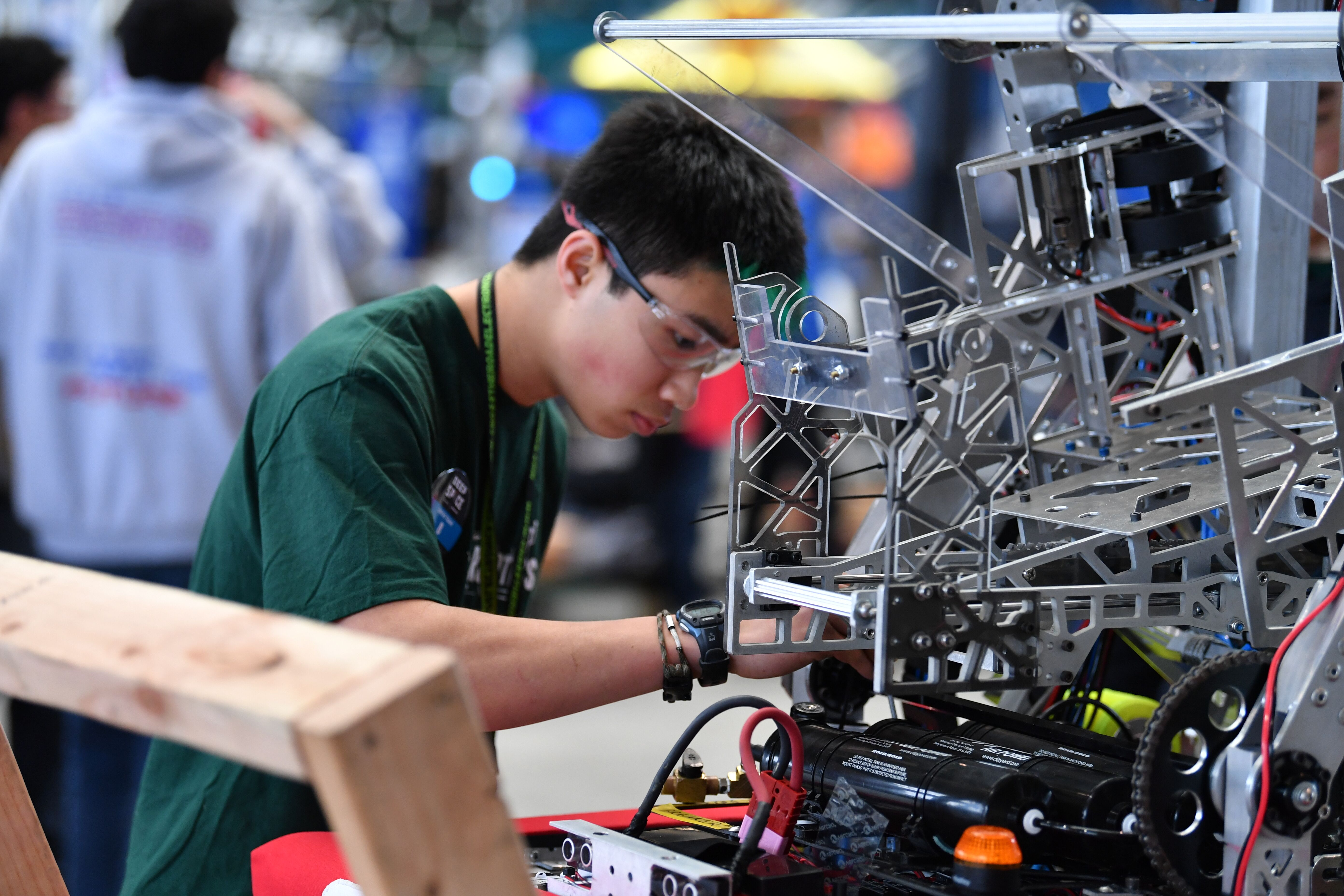 Paly Robotics Team 8 advanced to do something that had not been done by a Paly team in nine years — they captained an alliance.

According to team member and sophomore Alan Zhang, captaining an alliance means the teams selected are able to choose three other teams they would like to work alongside to complete the competition’s task.

Only the top eight teams out of 35 are able to captain alliances — these eight teams are determined by the qualifying rounds. Team 8 clinched the eighth seed, and was able to select three other teams to join its alliance.

Each year, the teams participating in the competitions must build a robot from scratch. The robots must be able to complete the tasks that are announced at the beginning of the season on “Kickoff Day” in January.

This year, the robots’ task was to place cargo (large rubber balls) or hatches (polycarbonate plates) onto a “cargo ship,” according to sophomore team member Andrew Pham.

According to Zhang, the team has improved since last year, partly thanks to a few new members.

“I think our upcoming freshmen and our new recruits have shown promise. Our results have been better so far, as we have not captained an alliance since 2010.”

The teams have six weeks to construct the robot and make sure it fits within the parameters of the competition, an intense period known as build season.

“During build season, while the build and software teams are working on the robot, our business and art teams are hard at work writing the essays we need for awards, cranking out the buttons and pins we hand out at competitions and putting together presentations we present to judges,” Team 8 co-captain and senior Jennifer Xu said.

Throughout the season, sub-teams within Team 8 — including the build team, design team, business team, art team and software team — work on different aspects of the competition.

Zhang credits each of the sub-teams for the success the team as a whole has achieved this year.

“In my opinion, making decisions faster throughout the sub-teams was a big improvement over last year, and has allowed us to be more successful this year,” Zhang said.

Once build season comes to a close, the teams must put the robot in a large bag, a process known as “bag and tag,” and begin to prepare for competition season.

“You can not work on the robot once it is placed in the bag; this will lead to disqualification,” Pham said.

Xu said the enthusiasm and hard work the team has demonstrated this season fueled its success.

“I think the cumulated efforts of built-up knowledge over time, the successful training of members, the hard work of all our sub-teams and our really wonderful student leaders, have all been allowing us to grow more successful as an organization.”

Team 8 advanced to the quarter finals at their most recent competition, Great Northern Regional, which took place from March 13-16.

According to Pham, the team prepared for Great Northern Regional like they would any other competition.

Part of the process was training with a nearly identical robot that was also built during build season. The team refers to this robot as the practice bot.

“Before competition, our software sub-team tests the code on our practice bot,” Pham said. “Our practice bot allows the software team to work out the issues the bot has.”

Zhang said this process is another reason the team has been more successful, as the prototypes have helped them find and correct errors. The team has increased the use of such prototypes since last year.

According to Xu, the team is preparing for future competitions by building off of what they saw in the last competition.

Team 8 looks to continue the successful season in upcoming competitions. According to Zhang, this year’s team has made the necessary improvements to be successful.