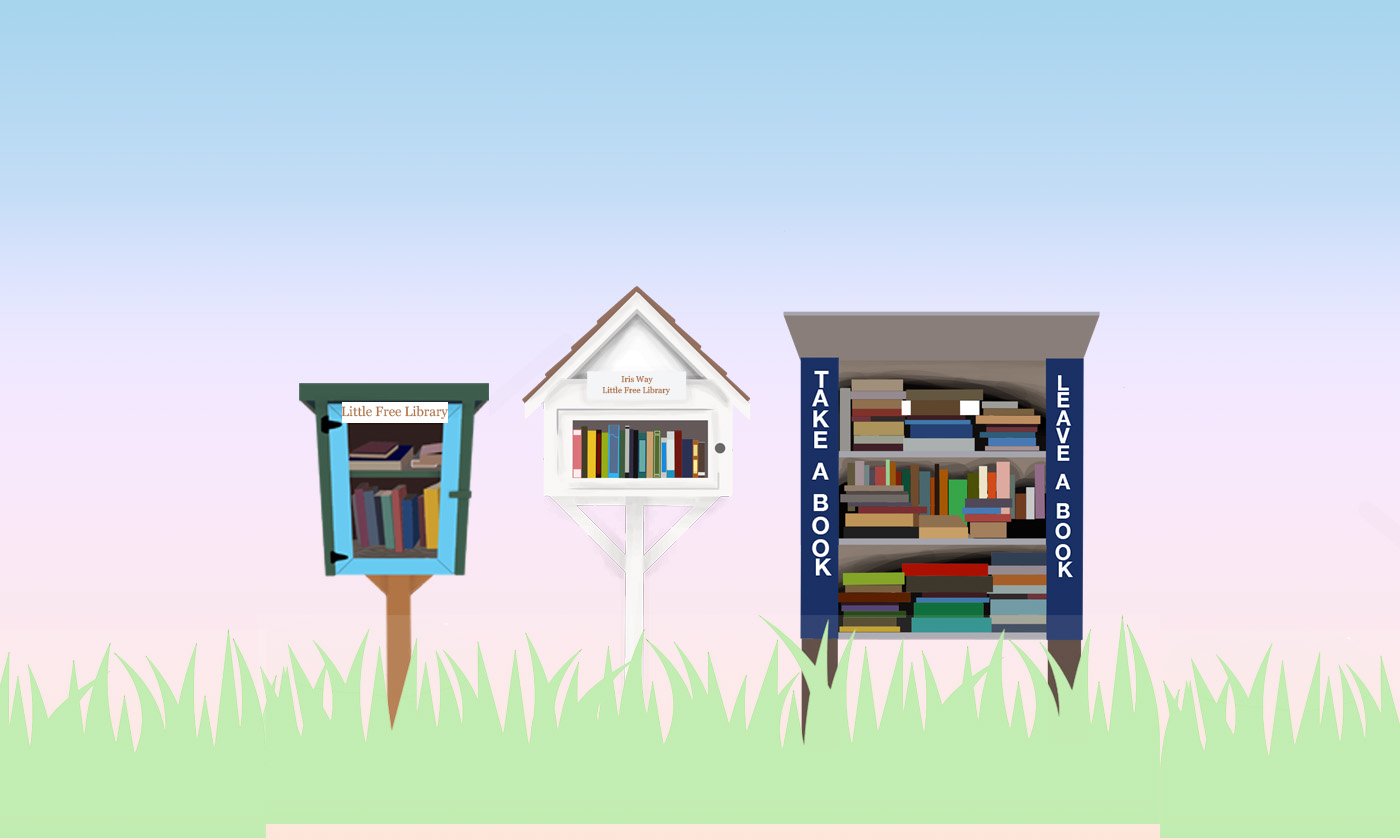 In any other neighborhood, people might look at Marilee Anderson strangely for walking down the street with a pile of books. But on her street, Iris Way, everyone knows she is on her way to donate them to the neighborhood’s Little Free Library.

With the slogan “Take a book, leave a book,” Little Free Libraries (LFLs) have been taking the world by storm, with over 75,000 official LFLs across 88 countries, according to their website. Palo Alto has 13 of them.

Palo Alto residents Marilee and Sam Anderson were inspired to start a LFL on Iris Way, after seeing others installed throughout Palo Alto and San Francisco.

Although the official LFL sells kits to build them (which include blueprints and wood pieces), the Andersons built theirs from scratch in 2015.

“I went around measuring other LFLs, taking pictures, sizing up details. My grandson was 12 at the time, the perfect age to dig post-holes and to start working with power tools. We collaborated for a couple of weekends, putting it together, adjusting   dimensions, painting, trying things out.”

Marilee Anderson registered their LFL for a charter number and bought a customized sign on the official website.

“You had to fill out a whole application … for the title on your library,” Marilee Anderson said. “You fill out the papers, and then they give you a charter number, making it official.”

Eventually, their efforts paid off. To celebrate the opening, the Andersons held a ribbon-cutting ceremony for the LFL with the neighborhood book club, declaring all of the neighbors as stewards.

Since then, the library has continued to thrive. In fact, so many people continued to bring books that Sam Anderson added a shelf to their LFL, allowing for more book storage.

While Marilee Anderson initially wasn’t sure about how many people would use it, she is quite satisfied with the results.

“I thought I’d have to be, you know, kind of next door ‘please bring some books in,’ but it’s been quite good,” Marilee Anderson said. “There have been little surprises.”

These “little surprises,” including lights inside the library, toys for kids and a bench underneath the library, have come anonymously from neighbors over the years.

“Somebody, I have no idea who it is, put a little bench,” Marilee Anderson said. “And then every once in a while, on the bench, is a box or a bag full of books that someone’s trying to get rid of.”

As a steward, Marilee Anderson does a lot of upkeep on the LFL to make sure it is clean, organized and runs smoothly.

“Someone has to keep watch that it doesn’t get dirty. With all this rain, (the wood) can swell and then the door doesn’t quite shut.”

She also regularly donates new books to the library and gets rid of old ones by going to the Palo Alto, Menlo Park or Los Altos library sales.

“Wednesday mornings, (Menlo Park Library gives) away tons of books,” Marilee Anderson said. “And I have picked up really good books and brought them over and those just seem to go very fast. At Menlo Park Library and Los Altos Library and Palo Alto Library … they have books for sale right there in the library for a dollar.”

Marilee Anderson said that she doesn’t mind buying the books at library sales, as they are inexpensive and people enjoy the books.

She also trades books from her LFL with nearby ones.

“If a book has been sitting there or we have duplicates … I’ve walked around to Heather (Lane),” Marilee Anderson said. “I think I’m always on the lookout for what’s needed, you know, neatening up, maybe bringing in more books.”

Heidi Mickelsen is the steward of the Channing Avenue Little Free Library. She was also inspired by seeing other LFLs around Palo Alto, and thought it would be a great way to get to know her neighbors.

“There are so few things in life that are free, and I was really touched by this neighborhood effort that was purely based on trust. You can take books without asking permission with the understanding that you will also share books with others.”

Freshman Eva Salvatierra enjoys visiting the LFLs around her street.

“I have always thought the libraries were super genuine,” Salvatierra said.

However, she doesn’t often take books from them, as she finds the books are not always interesting to her.

“I think that if the free libraries did have more genres that interested me … it probably would affect my reading intake and remind me to keep reading, because as life gets busier I often tend to forget how much I love doing it,” Salvatierra said.

Mickelsen said her LFL has brought her neighborhoods closer together.

“I have had more conversations with neighbors as a result,” Mickelsen said. “A few times, when I have told people where I live, they ask if that’s ‘the house with the little library,’ and then they tell me how much they appreciate having it in the neighborhood.”

Marilee Anderson echoes Mickelsen’s statement — she said she also enjoys the way the LFL has unified her neighborhood.

“People are just so excited about these. I think it’s so much fun. It’s just a nice way… to have a neighborhood togetherness kind of thing.”

Salvatierra also believes the LFLs are crucial in a busy world.

“Overall, I think the concept of having Little Free Libraries around our town can be a grounding reminder,” Salvatierra said. “Taking time to read or donating books matter and are a simplistic sense of joy.”